How large is the regional economic impact of the Taliban takeover of Afghanistan?

The size and sophistication of the Afghan economy does not suggest that the Taliban takeover in August 2021 will have a broad international economic impact. However, the change will affect each of the neighboring economies - Pakistan, Tajikistan, Iran, Turkmenistan, Uzbekistan and India. The most easily measurable impact will be on bilateral trade. However, the impact of refugees and tangential security issues may weigh on neighboring countries' public finances and operational capacity. Finally, there are other considerations worth noting.

Each of Afghanistan's neighbors ranks as a key source of imports. However, the importance of the Afghan market in their own total exports varies. In 2020, Iran, Turkmenistan and Uzbekistan all exported between 6% and 7% of their total shipments to Afghanistan - with energy a common, significant commodity for all three. <span/>The Taliban is keen to continue importing hydrocarbons from all three, particularly gasoline and diesel fuel. Given the US troop withdrawal, Afghanistan is freer to trade openly with Iran. Turkmen and Uzbek natural gas and electricity exports are likely to be uninterrupted moving forward. 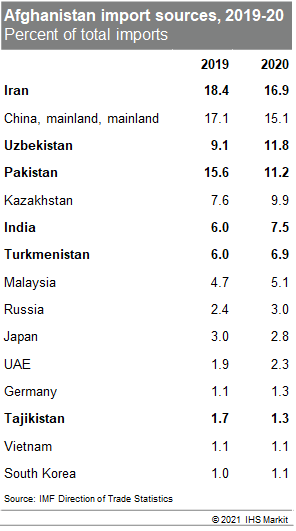 However, continued imports will be dependent on Afghanistan's access to hard currency, which may be severely constrained by the US administration. As the Taliban's available hard currency holdings are depleted, Afghanistan may no longer be able to pay for these shipments. In any potential barter trade agreements, Afghanistan has little to offer.

In Pakistan and Tajikistan, the share of total exports to Afghanistan is smaller - both around 4%. Those two countries face the same prospect of lost exports should the Taliban be unable to pay for them. Though the impact on the economy as a whole may be smaller, regional and sectoral impacts would occur; for Pakistan it would be agricultural commodities, medicines, and construction materials and for Tajikistan it would be primarily electricity and, to a lesser extent, cement and aluminum. India's exports to Afghanistan were a mere 0.3% of total exports in 2020.

The financial strain of refugees

A developing refugee crisis would have the heaviest social and economic repercussions in Pakistan. The cost of processing, housing, and supporting Afghan asylum seekers may be significant for local governments, whose fiscal finances have been already stretched by the COVID-19 pandemic. In July 2021 - before the Taliban takeover - Pakistani government has estimated that hosting an expected additional 700,000 "externally displaced Afghans" would cost it USD2.2 billion over three years. 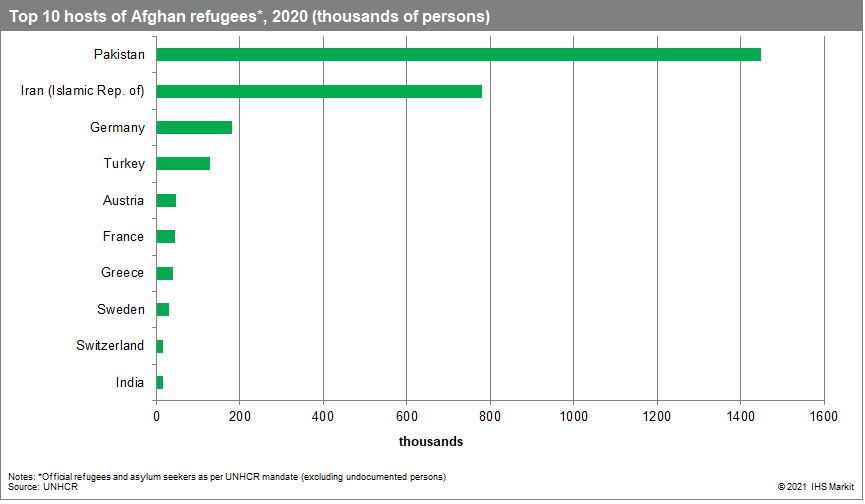 Refugee inflows to Iran have also been heavy. However, here we believe the impact is likely to be short-lived. These Afghans flowing into Iran are likely to seek asylum and integration in the western world, particularly in Europe, via Turkey. Thus, migration flows to Iran might be only transitory and have non-lasting effects on the Iranian economic infrastructure. That is, unless Europe, fearing the repeat of the 2015 Syrian migrant crisis, is reluctant to take in a large number of refugees.

There are many fewer refugees currently in Tajikistan, though any operation at all puts pressure on the country's already fragile finances. A larger share of refugees entered India, with the official number likely underrepresenting the total due to a complex bureaucratic registration process. These inflows strain state-level governments tasked with processing, accommodating, and supporting them.

Reported EU plans to offer host countries large financial aid to keep Afghan refugees within their territories will moderate the impact on local public finances. However, with the actual amount of refugees following the Taliban takeover likely to be significantly higher than anticipated and last longer than likely the EU is willing to fund, the refugee populations will put pressure on these local finances the longer they linger. Other countries, including Russia, have also offered aid to help offset costs to refugee host countries.

Both Turkmenistan and Uzbekistan have closed their borders to refugees and neither hosts any significant number of Afghanis.

Other economic impacts in the region

Pakistani political leaders have indicated that Islamabad is apprehensive of recognizing the Taliban government unilaterally, instead favoring a coordinated approach with other regional powers, most likely China and Russia. This, however, would further complicate Pakistan's already strained relations with the Western allies, potentially threatening financial assistance and lending, on which Pakistan has grown to heavily depend.

Tajikistan's long, mountainous, and poorly secured border with Afghanistan is one of the major exit passageways for Afghanistan's robust illicit narcotics production and trade. Given the Taliban's likely difficulty in securing legitimate export earnings in the face of widespread international sanctions, the narcotics trade could be fanned as a source of alternative revenue. An uptick in narcotics trade through Tajikistan would be disruptive to its security and its political and economic stability.

Security issues also threaten Uzbekistan's current reform push. Rising Islamic radicalism in the region would undermine the country's burgeoning foreign investment profile and threaten the hegemony of the Uzbek political outlook that facilitates the reforms. While the Taliban has offered security assurances to the Uzbek government, the Afghan government's ability to control allied groups of foreign militants will critically impact Uzbek security, and thus its investment environment.

Turkmenistan's overwhelming priority in its relationship with the Taliban is the protection and/or potential advancement of the Turkmenistan-Afghanistan-Pakistan-India (TAPI) pipeline. Taliban officials have publicly pledged to not only protect the TAPI pipeline within Afghanistan but to actively develop this and other regional connections. Unfortunately for the prospects of jump-starting the TAPI project, other major impediments - the project's financing, chief among them -- to its success remain intact.

With contributions from Adad Ali, Kevjn Lim, and Alex Melikshvili