The global search for plant protection solutions that are both environmentally safe and effective is driven by the need to supply food to the ever-growing world population. Among the latest solutions, essential oils are considered to be attractive for plant protection, for which increasing novel hybrid products and active ingredients are available.

Tea tree oil (TTO) is a valuable essential oil extracted by steam distillation of Melaleuca alternifolia (belonging to family Myrtaceae) leaves. It contains many components of terpenes, sesquiterpenes, and their respective alcohol. The oil has been shown to be an effective antiseptic, antifungal and bactericide.

Over the past decade it was found to be effective against a broad range of plant-pathogenic fungi in numerous crops, including vegetables, herbs, coffee, rice, grapevines, bananas, and fruit trees. New effective alternatives that can provide different and multiple modes of action with a lower risk for fungicide resistance, and which place a smaller chemical load on the environment concomitantly with consistent disease control, are required to increase options for the control of plant diseases.

The newly developed fungicide Regev EC from Israel's STK Bio-Ag Technologies, a hybrid formulation containing 200 g/L of the systemic triazole fungicide difenoconazole plus 400 g/L of TTO, is a <span/>prepacked formulation which provides various mechanisms of action against broad-spectrum of plant pathogens and improved efficacy.

The suggested hybrid solution can be the 'bridge' between conventional agrochemical farming and sustainable farming. This is because it is a 'pre-mix', so it is easy-to-use, in the exact same way as the grower's current chemical pesticide.

The fungicidal and antimicrobial activities of TTO against fungal pathogens, as documented in the literature, are derived from its ability to inhibit respiration and disrupt the permeability barrier presented by the membrane structures of living organisms.

Recent studies showed that TTO had a moderate effect against spore germination and significantly inhibited lesion development and sporulation of fungal pathogen. STK's Timorex Gold TTO was found to disrupt the fungal cell membrane and cell wall in plant tissue infected with pathogenic fungi, which explains why it exhibited strong curative activity against fungal pathogens, making it a unique product and enabling growers to use it even when the disease is already visible on the tissue.

In addition, Timorex Gold's TTO was found to be an activator of plant itself defense mechanisms and systemically induced resistance in plants.

The sterol biosynthesis inhibitors, including difenoconazole, affect the fungal cell membrane by inhibiting C-14 demethylation of lanosterol or 24-methylenedihydrolanosterol, a biosynthesis step that occurs during conversion of lanosterol to ergosterol, the final product of fungal cell membrane sterol synthesis. The different modes of action of TTO and difenoconazole, i.e. a combination of a natural product with broad-spectrum activity (TTO) and a traditional site-specific chemical, makes Regev an effective and unique tool for resistance management which is suitable for Integrated Pest Management (IPM) programs. This combination results in a reduced synthetic chemical load on the environment compared to other mixtures based on two traditional chemicals.

In field trials in Colombia, efficacy of Regev applied alone was compared to systemic fungicides, each applied in tank mixture with a protectant fungicide mancozeb. Untreated banana plants served as controls. Four foliar sprays of each fungicide/mixture were applied at spray volume of 19 L /ha at 10 days intervals.

Regev has multiple functional activity and presents a lower probability for resistance development or cross-resistance in plant pathogens, so it could be an important tool in preventing development of cross-resistance during the season. Its application can be rotated with products that exhibit differing modes of action and to which populations of fungal pathogens have shown a loss of sensitivity, so that population of pathogens less sensitive to chemical products can be reduced.

Regev is already registered in Israel, Philippines, Serbia, United States and various Latin American countries for various crops and diseases. It is currently in the process of registration in Brazil, Mexico and the EU.

Figure 2. Efficacy of Regev (TT+Difenoconazole) applied alone and systemic fungicides each plus mancozeb in controlling of black Sigatoka in banana plantations. 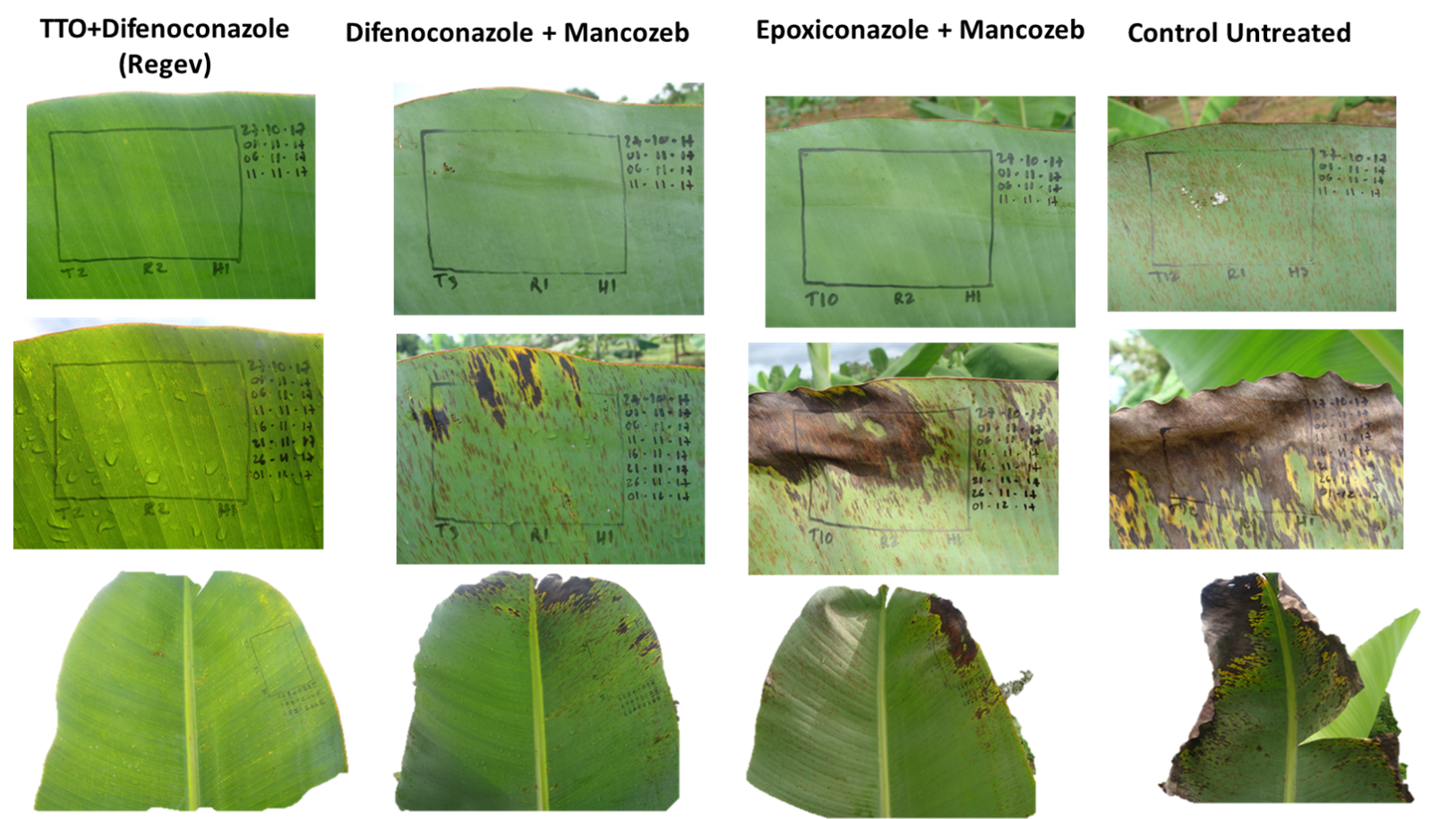