Since the election of President Andrés Manuel Lopez Obrador at the end of 2018, the renewable energy market in the country has experienced an uncertain regulatory environment. The current administration is focused on restoring the power and influence of Mexico's state-owned energy companies, coming at a crossroads with the previous administration's goals to open the segment to foreign investment. The policy decisions the administration has taken this year has soured private investor sentiment and will likely decrease utility-scale PV procurement in the country through 2024.

Mexico's former president, Enrique Peña Nieto and his administration spearheaded a five-year-long process to reform the country's energy sector in 2013. The reform sought to end the dominance of state-owned entities and open the doors for private and foreign investment into the sector. At the end of 2013, the Mexican Congress approved a Constitutional Reform that allowed private and foreign investment in the segment for the first time in 75 years.

While the reform did not come without its flaws, it positioned Mexico as a solid, emerging market for renewable energy. In the utility-scale PV segment, the country went from having an installed capacity of 17 MWdc in 2013 to having over 5 GWdc installed at the end of 2019, accounting for a compound annual growth rate (CAGR 2013-2019) of 126%. 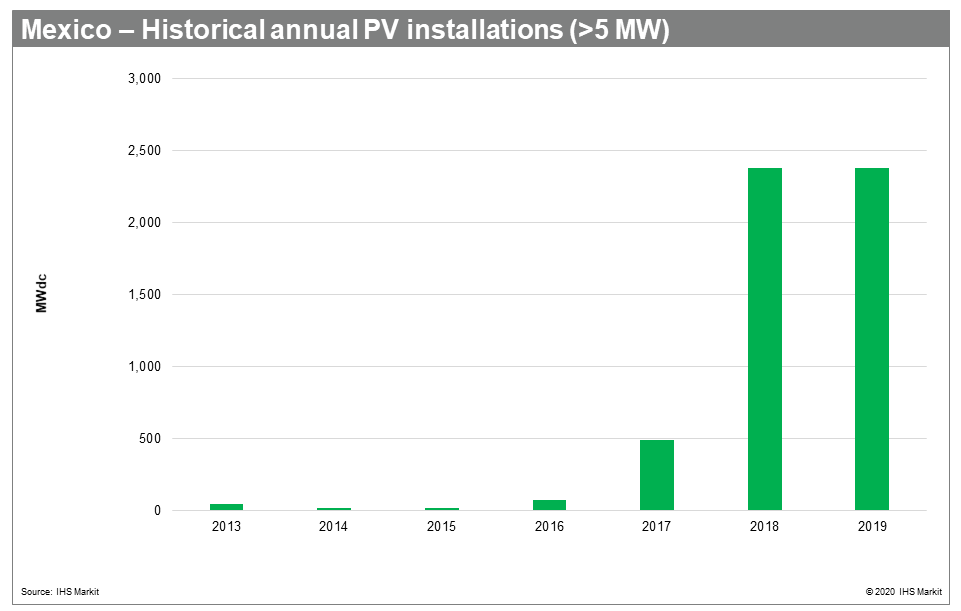 Most of the utility-scale capacity installed historically came from government-backed energy auctions. The first auction was launched in 2015 and two additional auctions were launched in 2016 and 2017. The tenders allowed for over 5 GWdc of solar developments to be procured. The winners for the fourth auction were scheduled to be announced in February 2019 but on 3 December 2018, mere days after taking office, the new government of President López Obrador suspended the fourth energy tender citing reasons of change in staff and the need to review the objectives and scope of the auction process. 26 companies had been pre-qualified to participate. A few months later, on 1 February 2019, the government officially cancelled the auction. IHS Markit estimated at the time that the cancellation represented a possible loss of over 1 GW of PV that could have been awarded.

Despite the cancellation, the corporate and bilateral market is a promising segment for developers to pursue, as IHS Markit estimates that there are over 2.9 GW of solar projects that have been completed and are being installed outside of the auctions.

COVID-19 and the ongoing battle for renewables

After the cancellation, the government pursued a series of policy decisions that began to chip away at the renewable energy sector and clouded it in uncertainty (see timeline of events below).

One of the decisions that made headlines and saw international criticism came on 1 May 2020 when the National Energy Control Center (CENACE), the country's market operator, announced it would suspend testing and grid connections for renewable energy plants indefinitely citing that the intermittent nature of renewables could pose a threat to the reliability of the grid during the era of COVID-19. The measures became effective starting 3 May 2020 and a few weeks later the Energy Secretariat (SENER) published the Policy of Reliability, Security, Continuity and Quality of the National Electric System (SEN). The policy imposes competition barriers for renewable energy power plants, citing their inherent intermittency as the main issue to the grid.

The decision by CENACE and the policy from SENER were swiftly criticized by industry players such as the Mexican business council, the Consejo Coordinador Empresarial (CCE), the Federal Economic Competition Commission (COFECE), PV association ASOLMEX, the European Union, Canada, and Greenpeace. A month after the announcements were made, several players were able to obtain preliminary injunctions and continue to move forward in the connection tests. In June, the country's Supreme Court upheld a complaint filed by COFECE and suspended the measures published in May, although a final ruling is still pending.

Three months after the shock caused by these measures, on 12 August 2020, the Energy Regulatory Commission (CRE) vetoed the publication in the Official Federal Gazette (DOF) of five agreements that had been previously discussed and approved. The CRE announced it would publish modified rulings regarding distributed generation. Rejecting the publication of these regulations generates even greater uncertainty and goes against the official discourse of the federal government and the Commission. Of the provisions that were rejected, one aimed to allow small generators to sell energy produced to users and the other gave guidance on the installation of battery storage for PV plants.

Looking for a counter-reform

At the beginning of September, the administration's political party, the National Regeneration Movement (MORENA), announced a legislative plan to create a new energy reform. The party is looking at the Congressional elections, scheduled for July 2021, to make changes to the Constitution. If Lopez Obrador's party wins the majority, it is likely future policy will favor Mexico's oil company, Petróleos Mexicanos (PEMEX), and state-owned utility, Comisión Federal de Electricidad (CFE).

President López Obrador's popularity remains high, although it has been taking a hit due to the country's ongoing recession, increasing unemployment, and his management of the COVID-19 crisis. Depending on how the administration continues to tackle these issues, it is possible MORENA could lose its current majority in the Lower House of Congress, thus limiting the government's ability to push forward changes to the energy sector.

In the lead up to the Congressional elections, industry stakeholders will likely continue to use several platforms to inform the public about the economic and social benefits of renewable energy. Moreover, although utility-scale projects have faced obstacles since the new administration took office, opportunities are still present in the distributed generation segment. The DG segment has been recovering after a slowdown at the beginning of the pandemic. To date, Mexico has installed over 1 GWdc of residential and commercial installations. If regulation does not change for this segment, IHS Markit expects an additional 1 GWdc to be installed through 2024.

The increased regulatory risks for renewables will likely favor large developers that have the financial ability to cushion for any financial shortfalls that could occur in an uncertain market, while smaller developers are likely to leave or not enter the Mexican market. It is expected that renewables will continue to face an uphill battle with the current administration, causing uncertainty and diverting investors to other countries where policies are more stable.

3 December 2018 - The government suspended the fourth long-term energy auction, one day before bids were due, citing reasons of change in staff and to review the objectives and scope of the auction process.

24 December 2019 - The CFE drafted a proposal that seeks to increase transmission costs for independent private generators.

3 May 2020 - CENACE issued a resolution to generators on 1 May suspending all pre-operative tests for wind and solar power plants. The Ministry of Energy (SENER).

10 June 2020 - The CFE announced an increase in fees to high and medium voltage rates paid by private companies for the use of transmission and distribution lines (tarifas de porteo).

12 August 2020 - The CRE rejected the publication in the Official Journal of the Federation regarding distributed generation rules, which affects the future of the segment. The CRE will prepare modifications to DG rules.

7 October 2020 - The CRE approved a resolution to amend the legal framework for holders of legacy self-supply and cogeneration permits. The resolution prohibits these permit holders from modifying expansion plans and adding new off-takers not originally in the permits. COFECE has pointed out this resolution reduces incentives to invest in the sector and generates more uncertainty.