Pharmaceutical prices in central and eastern European (CEE) countries tend to be low and drop over time - a double whammy that is difficult for pharma companies to navigate. However, this general rule of thumb also masks significant variation and diversity in the region. We examined this variation by comparing the manufacturer prices in Germany in May 2021 for a basket of identical medicines with prices in Romania, Bulgaria, Poland, Hungary, and Czechia. We found the prices of pharmaceutical products were on average between 90% (Czechia) and 78% (Bulgaria) of the prices in Germany. Prices of medicines in Czechia and Hungary are the highest within CEE countries. Prices in Poland, Romania, and Bulgaria tend to be lower and are in the same range. 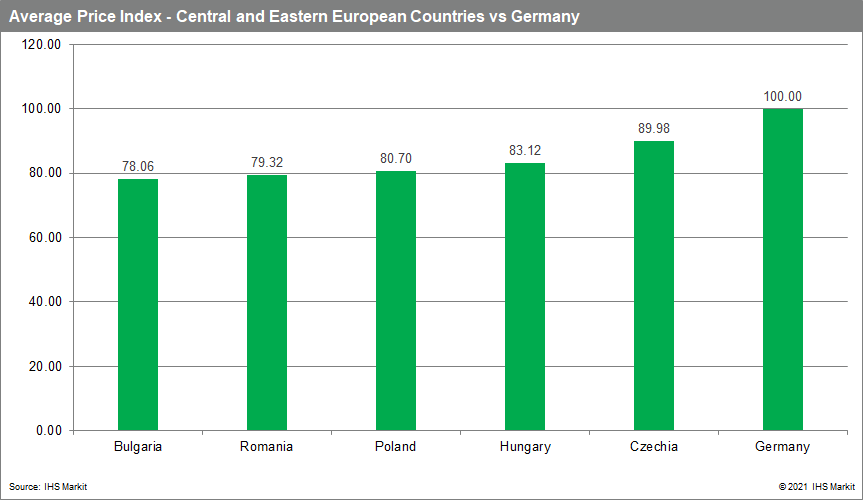 We also evaluated the manufacturer's price history to determine how much of a price change each product in our basket has experienced since launch. 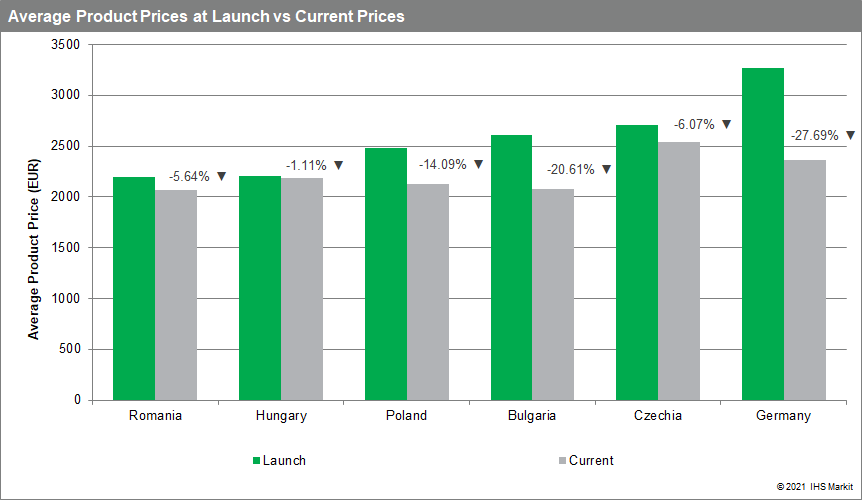 Germany had the highest average change with a 28% drop in prices since launch. However, that is to be expected as products are launched based on a free pricing system in the first 12 months before a benefit assessment procedure by the G-BA determines if the drug provides an additional benefit (or if it cannot be placed in a reference group). The assessment is followed by price negotiations with the GKV-Spitzenverband which significantly adjusts the price, as outlined in our previous blog about the impact of AMNOG reforms on prices in Germany. It is worth noting that Bulgaria also saw one of the steepest declines in prices, down nearly 21% since launch. It is likely dependent on the country's heavy reliance on strict international reference pricing (IRP) rules:

Meanwhile, Poland's drug prices also realized a notable drop of 14% since launch, although the country only informally utilizes IRP, along with other pricing policies such as internal reference pricing to effectively lower drug prices. Poland defines drugs with similar therapeutic action and mechanism of action (despite having different APIs) as part of the same reference group, and they would all need to be priced no higher than the lower-priced drug within that "limit group".

We also examined the proportion of drugs that saw a price decrease since launch and found that the majority in Germany (90%) and Bulgaria (88%) had undergone a price change, compared to a much smaller proportion in Hungary (18%).

Romania and Hungary had some of the lowest prices on average at launch, and there is very little change in prices over time. Both Romania and Hungary rely on IRP to set prices for prescription drugs. For Romania, we evaluated Canamed prices, used in pharmacies and licensed facilities, that are set based on the lowest price in any of the 11 reference countries with some exceptions such as vaccines. Hungary's IRP basket is even wider than that of Romania, looking at the entire European Union or European Economic Area (EU/EEA) area, and set prices based on the lowest price in any of those countries. Furthermore, Hungary also utilizes internal or therapeutic-area reference pricing, and manufacturers will need to enter into price-volume contracts with the regulator (NEAK) that further drive down prices at launch.

Czechia has some of the highest prices on average among the five Central and Eastern European countries we looked at, although the country also relies on IRP for both pricing and reimbursement of drugs. For new drugs, the maximum manufacturer price is set based on the three lowest-priced countries in a reference basket of 18 EU countries. After a price is set, a review is typically taken after five years, making Czechia an ideal early-launch market within CEE countries.

A closer examination of one particular drug Roche (Switzerland)'s melanoma drug Zelboraf (vemurafenib) revealed that price drops did happen more often in Bulgaria, Poland, and Czechia - interestingly, these drops initially started around the same price point and gradually declined over time often in line with key pricing and reimbursement developments (green circles in the timeline), as well as launches of the drug in new markets that could impact IRP. In Romania, where the drug was initially launched in 2012 prior to a reimbursement assessment, this particular product was subsequently withdrawn from the market and re-introduced in 2020 at a marked discount following its inclusion into the reimbursement list. Products withdrawn from the market at the time of assessment were not included in our analysis, and this could be one of the main reasons Romania did not seem to be realizing major price changes since launch. The price of Zelboraf in Bulgaria and Romania eventually matched the price in Hungary, meanwhile prices in Poland and Czechia also eventually synced up. 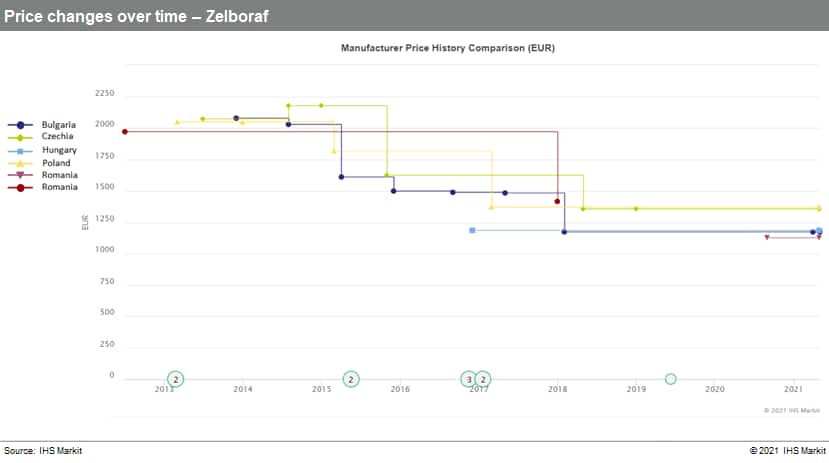 This clearly illustrates the downward pull that IRP or reference pricing can have on manufacturer prices over time, even without taking into account reimbursement status or additional rebate or clawback negotiations.

Posted 13 May 2021 by Floriane Reinaud, Director, Healthcare Research and Analysis, IHS Markit and