The Near-Term Reduction of the North American Advantage for Polyethylene

The coronavirus disease 2019 (COVID-19) pandemic is a transformative event for the world overall as the demand for oil could see profound long-term changes from the economic, social, and political repercussions that have occurred in the last two months. Imagine if the fourth quarter of 2019 was the demand peak for oil and the market never again reaches that same level of demand. Take the airline industry, for example, where the number of travelers has dropped 93% from a year ago and the industry is grappling with a recovery that could take years to recover to 2019 levels.

The impact on consumers and the effect on demand in many industries is historic. Oil demand is down 22 million barrels per day (MMb/d) in the second quarter. This is the greatest decline, by far, in the history of the oil industry. Demand for all major refined products is down in all regions of the world. The largest volume of oil production cuts, including shut-in production, in the history of the oil industry will occur in the second quarter of 2020 because of low prices, storage constraints, and government-ordered cuts. We estimate that second-quarter 2020 world liquids production could be as much as 17 MMb/d less than the first quarter. On 20 April 2020, West Texas Intermediate (WTI) settled at -$38 per barrel (bbl)—a $56/bbl drop in price from the previous day. This extreme price event was the result of the massive supply surplus, combined with futures traders who could not take physical delivery on the eve of the front-month contract's expiration.

The consequences of the COVID-19 pandemic and the drop in oil prices created a "perfect storm" scenario for North American (NAM) polyethylene producers. The drop in Brent crude oil prices upended the global cost curve as NAM ethane integrated PE producers have, for all practical purposes, lost most of the feedstock advantage that the shale gas revolution created over the past 10 years. Asia Polyethylene (PE) costs are heavily influenced by Brent Oil prices while North American PE costs are tied more to natural gas liquids ethane and propane. Brent and WTI generally follow similar price movements and have both fallen dramatically since the beginning of the year. In January when WTI was priced at $57.5/bbl., a USGC PE producer integrated to cheap ethane had an estimated cash cost advantage of about $481/ton vs. a naphtha based PE Asian producer. This cost advantage drops to $38/ton assuming that WTI price of $28.6/bbl. as currently forecasted for July 2020 by IHSMarkit. Should WTI crude oil prices fall below $20/bbl. US producers would likely be unable to compete in the Asian/European markets. Indeed, the impact of lower oil prices and competitive PE offerings from Europe and Asia in the export markets have already driven PE export prices to the point that some US production curtailment is already being curtailed. 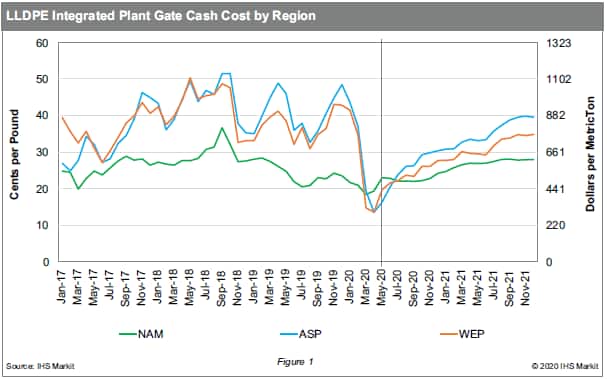 So why are the NAM producers the first to announce temporary shutdowns? The answer is a combination of reliance on ethane-based production capacity and increased exposure to the export market. Since 2015, the US has emerged as a "World Scale" polyethylene player (Figure 2) as nameplate capacity increased in North America from 20% to 23% of the world capacity, or an increase of 8.6 million metric tons per year. This nameplate capacity growth occurred when domestic demand increased only 263 kilotons per year. In other words, domestic production increased 33 times that of the domestic demand growth. The end result was that the US PE exports increased from 34% to 46% of total demand over the past five years. 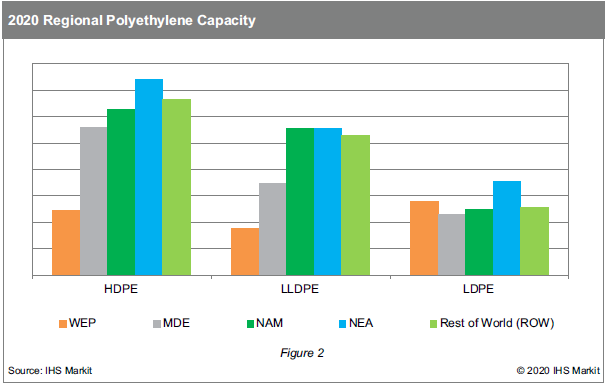 These new PE investments were based on the abundance of ethane from shale oil and gas technology delivering ethane to the USGC that is competitive with Middle East ethane economics. Since 2015, NAM PE capacity increased by 17 PE trains assuming world-scale (500 kilotons per year) capacity, with another 8 PE trains in the final stages of engineering and final investment decision (FID) to be online by 2024. These investments came from both domestic producers such as Dow, ExxonMobil, and LyondellBasell as well as new to North America producers such as Shell and Sasol. Certainly, the NAM producers have achieved economies of scale with other regions such as Northeast Asia (NEA) and the Middle East and are now faced with competing to a much greater extent in the global markets. 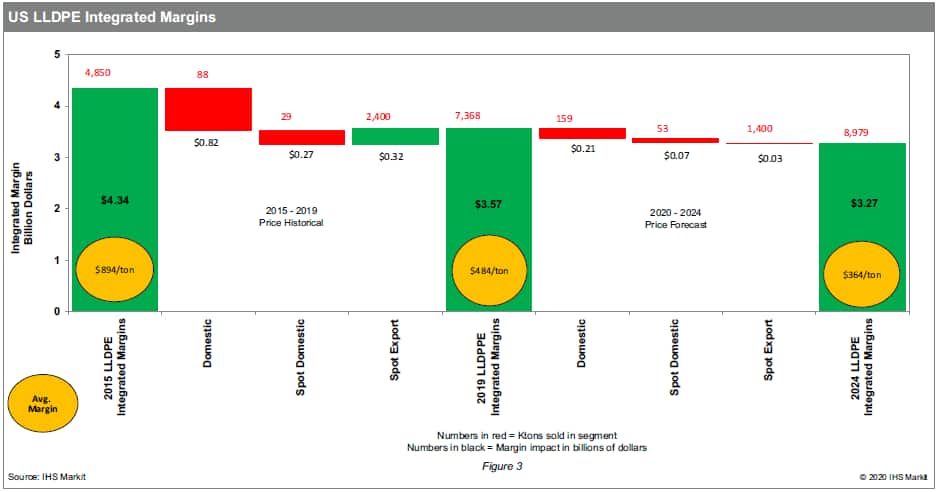 One should ask, what has been the financial result associated with all these billions of dollars invested in the North American assets? Sadly, the news has not been good so far. The ramped-up capacity and production coupled with an increasing allocation of sales to the export market has done little to impact total margin dollars derived from the business (Figure 3). The green bars represent the total margin dollars for the US LLDPE producers in 2015, 2019, and 2024 going from left to right. The red numbers (above the red and green bars) represent the sales volume increase in kilotons in each segment over the two five-year periods. The black numbers (below the red and green bars) represent the loss or gain in margin contribution in each segment. For example, during 2015-19, the domestic sales volume increased by 88 kilotons but the margin contribution decreased by $820 million. One would expect that a 52% increase in new resin sales from 2015-19 would show some improvement in total margin contribution. Based on IHS Markit estimates, this did not occur, as the LLDPE market segment made $770 million less in margin revenue during the 2015-19 period. Unfortunately, IHS Markit forecasts a continuation of this downward trend with another $300 million decrease in margin contribution through 2024 even as resin sales increase by 22%.

Lower domestic, spot, and export sale margins of $1.07 billion are due to lower average margin returns on a per unit ton basis from 2015 to 2024 ($894 per metric ton versus $364 per metric ton, respectively). It should also be noted that export volumes accounted for 92% of the total increase in resin sales over the 2015-24 time period. In summary, 4,129 kilotons of additional investment (8 LLDPE plants) is forecast to make approximately $1.07 billion less in margin contribution as supply and demand balances along with oil price forecasts show continued declines in margins for domestic producers.

So, what does the future look like? Challenging at a minimum. Certainly, margin contributions will be lower for longer, but estimates are that domestic producers will be able to achieve cash costs below West European (WEP) and NEA producers by the end of 2020. This assumption greatly depends on the price of oil and ethane as there are some plausible scenarios that could put ethane supply at a shortage if domestic oil and gas production is cut more severely than in current forecasts. These trends will depend on how fast the global economy is able to recover to pre-2020 levels. In the meantime, producers are optimizing production wheels to focus on high-demand segments such as health and hygiene, medical, and food packaging markets. Durable goods and luxury items are expected to remain depressed throughout 2020 and into 2021. IHS Markit estimates that the overall 2020 demand for polyethylene will be 4% lower versus 2019 in the domestic market. Globally, demand is expected to contract by 0.8% (down from previous estimates of 3.9% growth) as countries such as China recover from the COVID-19 pandemic.

Given the current level of uncertainty around regional production economics and PE demand, we expect to see a pause in new investments in the region. We are already seeing signs of this with project delays and indefinite suspensions of projects. PTTGC America and Daelim Chemical USA's joint-venture 1.5 million metric tons/year cracker/polyethylene project in Belmont County, Ohio, recently announced there was no firm timeline regarding an FID for the project owing to the economic uncertainty caused by the COVID-19 outbreak and subsequent containment measures. Phillips 66 CEO Greg Garland said, "CP Chem and Qatar Petroleum had delayed a final investment decision on new petrochemical facilities, including crackers and derivative plants, on the US Gulf Coast and in Qatar, to 2021 from this year given pandemic uncertainties." In summary, the large-scale investments that have and continue to be made in North America for polyethylene production are facing challenging times.