The inventiveness and reactivity of the global refining industry has been sorely tested by COVID-19. Already in a state of flux from the January 2020 International Maritime Organization (IMO) specification change, refiners in all world regions have been forced to reduce output and reconfigure yields to meet unexpected demand changes. As markets begin to find a new balance, refiners will be tasked with not just redesigning production profiles in the medium term, but weighing investments to selectively future-proof assets for the longer term in an inhospitable investment environment.

IHS Markit's forecast for 2020 refined product supply projects a drop of about 10.8 million barrels per day (Mmb/d), a decline of approximately 12% compared to 2019. Recovery will be slow, and existing refineries will be under pressure not just from muted demand growth, but increasing world capacity. Some 5.7 Mmb/d will come on line by 2025, even accounting for project delays and cancellations, estimated at about 1.6 Mmb/d.

Longer term, in a post-Covid environment, opposing forces will be region-dependent. In regions with clear energy transition goals, decarbonization will not only usher in peak demand, but heighten environmental pressures on the refining production process itself. Other regions, notably parts of Asia and the Middle East, will be under pressure to find new, cost-effective ways of supplying naphtha for petrochemical feedstocks at scale - something older fuels-oriented refineries will struggle to deliver. With an additional 7.9 Mmb/d in capacity needs still to be determined, overall capex requirements remain in excess of US$ 350 billion.

REDUCE: Energy transition and COVID-19 act as an accelerator of inevitable rationalization

The European refining industry is structurally challenged by imbalances in product yield and demand, high crude-import cost structures, labor and fixed costs, and high fuel costs relative to competitors. IHS Markit's post-Covid outlook for European refining is for some 1.8 Mmb/d in runs reductions through 2025 compared with 2019. This shift equals about half of the total reductions expected to 2050, similar in magnitude to the losses seen in the five years following the 2008 financial and economic crisis. The US is seeing rationalization linked to the shifts in supply costs due to the lifting of the crude oil export ban. Other shifts are occurring due to the COVID-19 reduction in demand. And more moderate runs are expected in export refineries in South Korea, Taiwan, and Singapore due to competition from newer, lower cash-cost export refineries.

Europe and select US states stand out in their ambition to reconfigure energy supply and demand toward net-zero carbon emissions. These policies call for increased fuel efficiency, a reduction in the carbon content of liquid fuels, and alternatives to fossil fuel use in the heavily oil-dependent transportation sector. The refining industry is already seeking ways to adapt to a low-carbon future by pursuing:

This transitional model began to take shape in the wake of the 2009 financial crisis with a series of refinery conversions, where existing sites and equipment were repurposed to focus entirely on biofuels (see Figure 1). Now six US refineries are moving to renewable diesel or sustainable aviation fuel (SAF), joining many others now adapting plants for co-processing of biofeedstocks alongside fossil fuels. 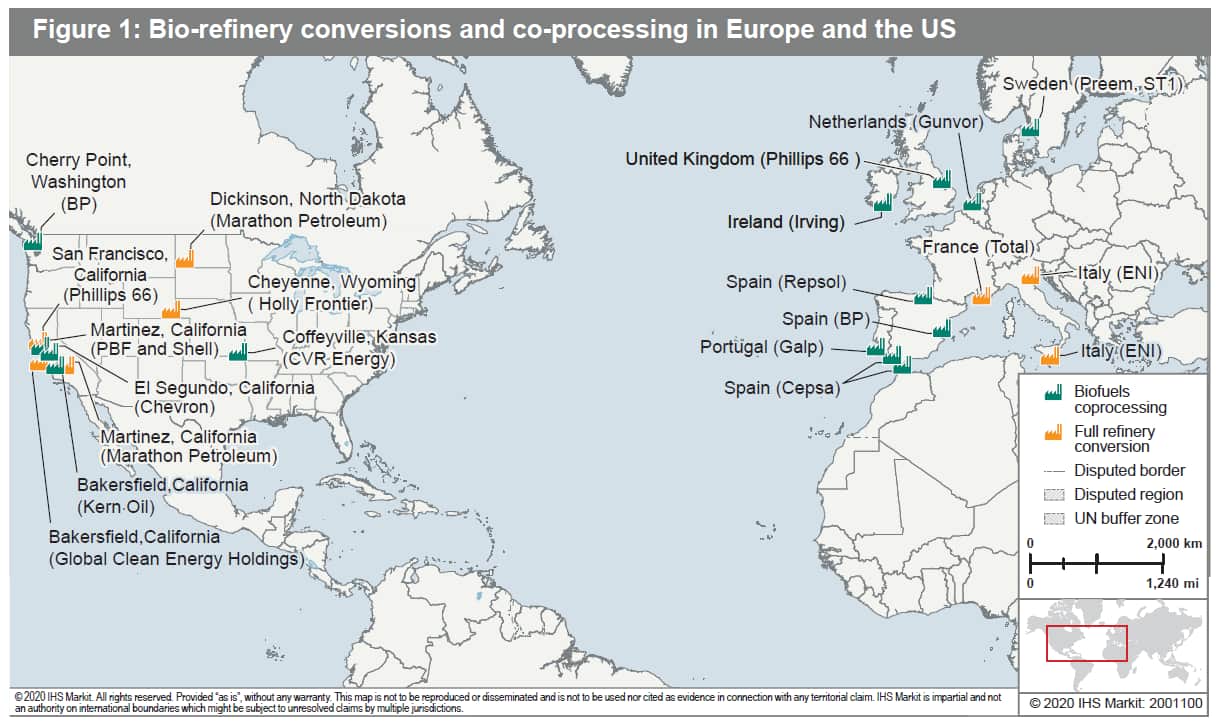 REINVENT: The refinery of the future will prioritize petrochemicals Companies battling the effects of pandemic lockdowns on oil demand face increased capex pressures and a far less certain future investment outlook. IHS Markit expects a "plant and prune" cycle of activity - preparing for new supply growth while cutting back the old - to continue through 2050. Rising demand for petrochemicals will more than double petrochemicals feedstocks demand by 2050. In response, the refining system must reconfigure to balance fuels trade with increased petrochemical feedstock production.

The sheer magnitude of new petrochemicals demand supports the addition of large-scale production units, but traditional refinery-plus-steam-cracker configurations are not the answer. R&D efforts are now focusing on the most efficient path from crude to chemicals, both in new plants and existing facilities. IHS Markit's upcoming Refining and Petrochemicals Integration Study examines how refiners can turn to growing petrochemical demand to help their businesses survive and thrive using a combination of strategies:

Feasibility analysis on future refinery investment should also look closely at the potential benefits of co-investment in integrated petrochemicals and, in certain markets, biofuels. The ability to switch between products is critical, and flexibility to cater to both fuels and chemicals production can provide a competitive edge. The downstream refining industry has weathered many storms but has also been shaped by them. The industry will endure this challenge as well. It must, for oil products will be needed for a long time, even in the greenest of scenarios. However, the industry will reduce, repurpose, and reinvent to accommodate climate goals as well as consumer and feedstock demand.

Figure 2 example of modeled yield shifts to reach naphtha production required by 2050 to meet petrochemical feedstocks demand. In this example, current country-level current petrochemical naphtha yield stands at 8%, or 250,000 b/d of production. Three pathways are selected to obtain a final yield of 19% (910,000 b/d) in 2050.