Recruitment rises sharply, but demand for staff grows at slowest rate for a year

Latest survey data from UK recruitment agencies signalled a further sharp increase in the number of people placed into permanent positions in January, boding well for employment growth at the start of the year. Widespread shortages of staff were again reported, with the resulting tight labour market pushing up pay. However, while recruiters noted a further steep increase in the number of job vacancies, demand for staff from employers showed signs of cooling from recent highs, rising at the slowest rate for 13 months. 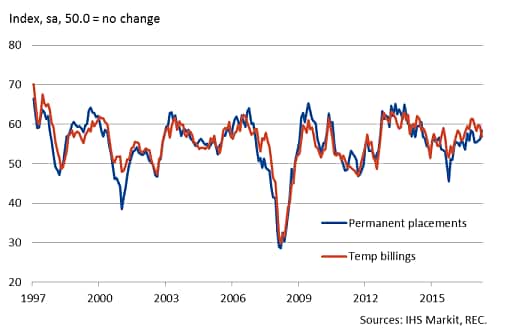 The upbeat Report on Jobs data, which are compiled from a regular monthly survey of over 400 recruiters conducted by IHS Markit on behalf of the Recruitment and Employment Confederation, has been consistent with recent ONS data releases. Official statistics showed the jobless rate holding at 4.3% in the three months to November, it’s lowest since 1975. The substantial increase in staff appointments seen at the start of 2018 indicate that this figure could potentially dip further.

The survey data showed the overall upturn in permanent staff placements was broad-based, with all five monitored UK regions registering marked increases in staff appointments, led by the North of England.

Billings received from the employment of temporary workers also rose at a historically robust pace, albeit with growth softening to a ten-month low.

The strong and sustained increase in appointments over the past 18 months has been fuelled by substantial growth in demand for staff at employers. The latest survey data highlighted solid growth of demand for both permanent and temporary workers across the UK, albeit with vacancies rising to a weaker extent than prior months. Demand for staff in fact grew at a slower rate for a fifth successive month, registering the weakest monthly increase since December 2016.

Strong increases in staff vacancies have not only been seen in the jobs survey, but also in official data. Notably, the number of job vacancies reported by the ONS reached a record-high in the final quarter of 2018 (810,000), with the survey data indicating that this figure could rise further. 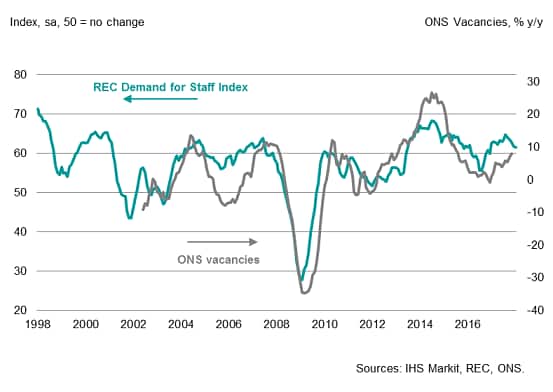 The availability of staff to fulfil permanent and temporary positions continued to fall markedly in January, despite rates of contraction softening since December.

Importantly, recruiters are registering a wide range of skill shortages, including accountants, nurses, rail engineers and software developers. While difficulties finding suitable staff reflected the current low level of unemployment, anecdotal evidence indicated that candidates were often not willing to seek out new opportunities due to the uncertainty surrounding Brexit and the economy. 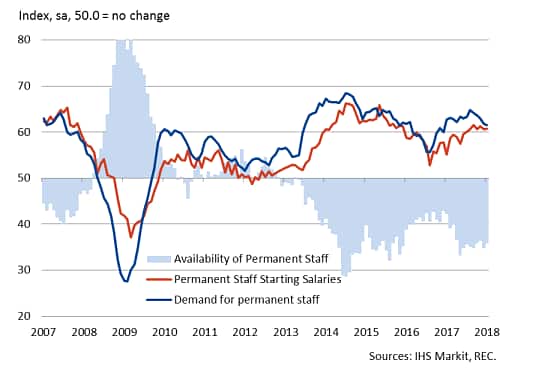 The latest survey also highlighted growing pay pressures as firms attempt to attract applicants from a shrinking pool of available candidates. Starting salaries rose at the fastest rate for over two-and-a-half years, while temp pay growth was also marked (albeit weaker than that seen in December).

Earnings across the economy as a whole have risen at a largely lacklustre pace in the past year, but there are tentative signs that tighter labour conditions are feeding through to wider pay trends. The latest official data showed that regular average earnings, i.e. excluding bonuses, rose by 2.4% on the year in the three months to November, up from 2.3%. 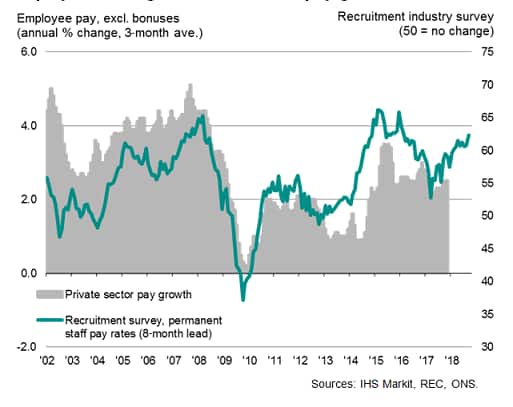