The latest KPMG and REC Report on Jobs data, compiled by IHS Markit, showed a further severe drop in hiring activity across the UK as firms placed their recruitment plans on hold amid the coronavirus disease 2019 (COVID-19) pandemic. Permanent placements and temp billings fell at the second-sharpest rates on record (behind only April 2020), while the weaker business outlook led to a further steep reduction in vacancies.

Meanwhile, reports of redundancies and workers being placed on furlough led to the quickest rise in candidate availability since mid-2009. At the same time, weak demand for staff and greater pressure on client budgets drove a marked decline in starting pay.

The weak recruitment data add to evidence, including the recent IHS Markit/CIPS UK PMI surveys, that labour market conditions have deteriorated severely since the outbreak of the coronavirus and subsequent lockdown.

Slightly softer, but still severe, fall in recruitment activity in May

The Report on Jobs survey, which monitors over 400 recruitment consultancies across the UK, provides advance signals of labour market trends. The survey has indicated a marked decline in conditions since the UK economy went into lockdown at the end of March.

The number of people placed into permanent job roles fell sharply for the second month running, albeit with the rate of contraction easing from April's record pace. Billings received from the employment of short-term staff likewise fell at the second-quickest rate in more than 22 years of data collection. 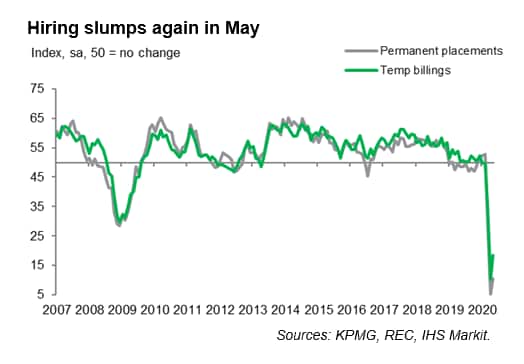 Recruitment agencies widely reported that the COVID-19 outbreak had led to a sharp reduction in demand for workers, with many clients remaining closed or running at reduced capacity in May.

Only healthcare vacancies increase in May

The virus outbreak continued to have a detrimental impact on demand for staff, as many firms struggled to maintain current levels of employment. At 19.3 in May, the index measuring total staff vacancies was up from April's record low of 9.3 but remained well below the neutral 50.0 mark and therefore signalled a further substantial fall in vacancies.

Vacancy data split by sector showed that only healthcare saw an increase in demand for workers during May. In contrast, substantial falls were seen across all nine other remaining segments, led by Retail and Hotel & Catering, which have also been the hardest hit by coronavirus restrictions. Latest official vacancies data published by the ONS have also highlighted a marked fall in demand for staff. Vacancies declined by 170,000 to 637,000 in the three months to April from the previous three months. This marked the largest quarterly rate of decrease since the series began in 2001. The recruitment industry survey hints that official vacancy numbers may continue to drop sharply in upcoming releases. 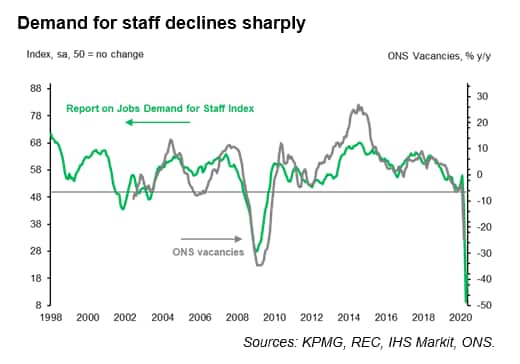 The coronavirus outbreak has also led to a sharp rise in candidate availability during the last two months. The May survey data signalled the steepest increase in overall staff supply since July 2009, as recruitment agencies reported increased number of candidates applying for positions following redundancies or having being placed on furlough.

The steep and accelerated rise in availability signals that unemployment is likely to increase further during the second quarter. The latest ONS data showed unemployment rising by 58,000 in the three months to March, while the timelier jobs survey data suggests job losses could edge closer to 150,000 in May. However, its worth noting that furloughed workers are not included in unemployment statistics, as they are kept on payrolls, which is likely to help limit any changes in official numbers. 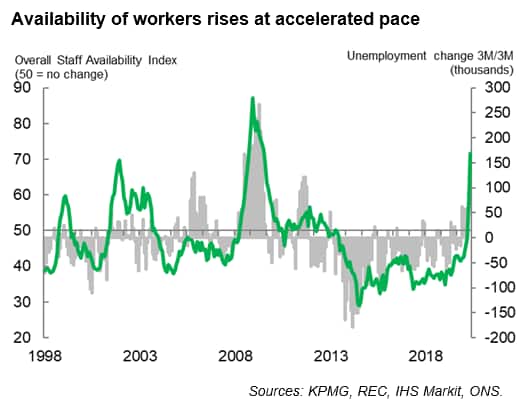 Faltering demand for workers and lingering uncertainty around the COVID-19 pandemic meanwhile led to marked falls in starting pay during May, with many recruiters noting that clients had cut their budgets as part of efforts to contain costs.

Notably, starting pay for both permanent and temporary workers fell at the quickest rates since 2009. The index measuring starting salaries, which generally acts as a good leading indicator for official earnings growth, suggests that total average weekly earnings growth may weaken further from its current rate of 2.4% and move closer to stagnation in upcoming releases. 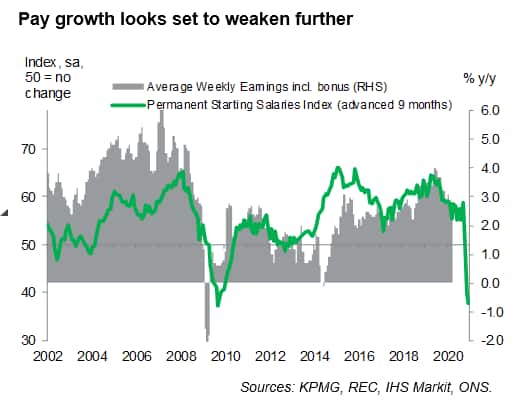 There remain a number of downside risks to the labour market and wider economy at present.

First, uncertainty over the pandemic, and a slow and careful reopening of the economy, is likely to weigh on demand for workers in the coming months as many firms will be looking to contain costs or be operating below capacity due to social distancing.

Second, the winding down of the government's Job Retention Scheme over the coming months could lead to a steep rise in unemployment. Firms may need to shed staff if sustained weak demand means they are unable to finance employment costs.

Third, uncertainty regarding the UK's departure from the European Union, and whether this occurs with or without a trade agreement, has also clouded the outlook and could dampen hiring and investment.