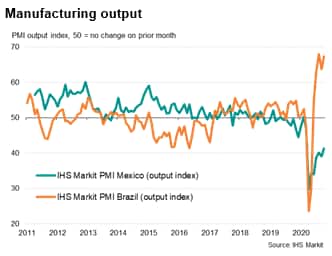 Brazil is leading the global manufacturing recovery, while Mexico continues to suffer an especially steep decline. PMI survey data help to identify the causes of the divergence, which include differences in exchange rates, business confidence and the pandemic stimulus.

Although the JPMorgan Global Manufacturing PMI, compiled by IHS Markit from its proprietary business surveys, rose from 52.4 in September to 53.0 in October, its highest since May 2018, the recovery of the manufacturing sector has by no means been universal. Of the 31 countries covered by the surveys, factory output rose in 22 but fell in nine during October. However, most striking is the divergence between the two countries which have sat at opposite ends of the PMI ranking table in recent months: Brazil and Mexico.

In the three months to October, the manufacturing PMI output index for Brazil has averaged 66.4, surpassing any rate of expansion seen since the survey began back in 2006 by a wide margin. By comparison, the output index for Mexico has averaged just 40.2 over the same period, indicating a contraction of production the severity of which has been exceeded over the past decade only by that seen at the height of the pandemic earlier in the year. 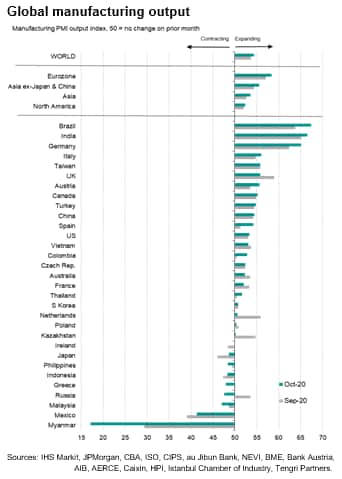 The PMI data also show that output in Brazil fell for just three months at the height of the COVID-19 pandemic, between March and May 2020, whereas Mexico's output has fallen continually since March.

The divergent performance is also reflected in the official data, which are only available with a delay compared to the PMI and hence only currently show the situation up to September. However, these data already indicate that output in Brazil had risen 2.5% above levels of a year ago whereas output in Mexico continued to run some 5% below September of last year, corroborating the divergent trends signalled by the PMI surveys.

Similarly, September's output in Brazil had recovered to a level 1.1% higher than in January while Mexico's production remained 3.5% below that seen at the start of the year. 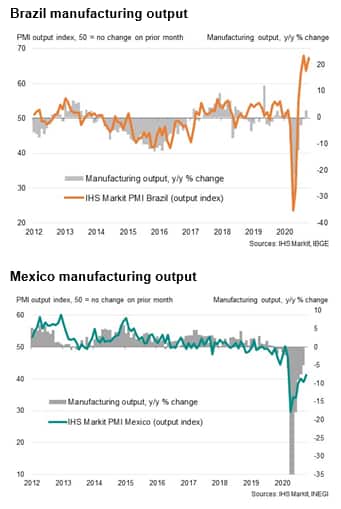 The differing recovery rates only partially reflect the depths of the downturns at the height of the pandemic from which both countries are recovering. In Brazil, output had collapsed by 31% in April compared to its level at the start of the year whereas in Mexico the slump was only slightly larger at 34%. 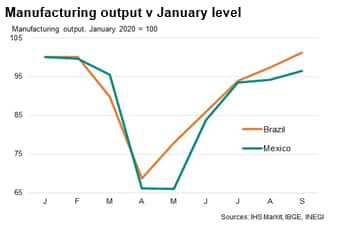 The different recovery speeds also do not reflect variances in the degree and timing of lockdowns to fight rising COVID-19 infections, which have been similar.

Both Mexico and Brazil locked down their economies to similar extents between April and July. Although Mexico subsequently relaxed some restrictions slightly earlier than Brazil, containment measures are now less severe in Brazil than Mexico. The result is that the average containment scores seen over the course of the pandemic have been very similar: an average of 46.3 for Mexico (up to November) against 46.8 for Brazil. 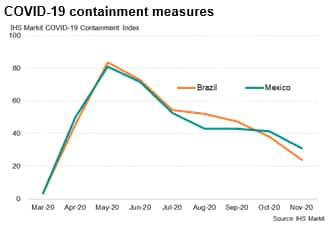 Digging deeper into the PMI sub-indices provides some further insights into the causes of the divergent manufacturing output trends.

One index that has shown in interesting divergence has been the survey gauge of new export orders. While exports have now returned to growth for two consecutive months in Brazil, rising in October to the greatest extent seen in the 14-year history of the PMI survey, Mexico's exports continued to fall at a rate only exceeded over the past decade by the decline seen at the height of the pandemic. 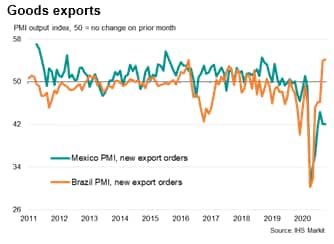 Brazil's superior export performance likely in part reflects the depreciation of the real, which has plunged by around 35% against the US dollar since earlier in the year; a far greater fall than the 13% drop seen for the Mexican peso.

Importantly, not only has the currency fall made Brazil's imports more competitively priced in foreign markets, the weakened exchange rate has also raised the cost of imported goods, which has led to import substitution as buyers favour cheaper domestically sourced goods. Domestic demand consequently appears to have also benefited, with overall new orders growth in Brazil running far ahead of that seen for just export orders. The opposite is apparent in Mexico, where domestic demand appears to be acting as a drag on manufacturing alongside falling exports.

Business confidence in Brazil has generally run higher than in Mexico since the economic reforms of 2016. In contrast, business confidence in Mexico has shown signs of becoming increasingly subdued, often linked to concerns over US trade policy as well as the domestic political situation. Sentiment fell sharply in both countries at the height of the pandemic, though notably remained positive in Brazil.

A subsequent recovery of sentiment in Brazil in recent months leaves the overall degree of confidence running above the post-2016 average, despite a slight dip in October, but in Mexico confidence remains among the lowest seen over the past decade.

Sentiment has been boosted in Brazil in part by the benefits of a weakened exchange rate, but also by an aggressive government stimulus package designed to fight the negative economic hit from the pandemic. The Brazilian government implemented support measures to the equivalent of 11% of GDP expenditure, including income support, job schemes, lower taxes and higher health spending.

This contrasts with a far smaller stimulus in Mexico, where the government has sought to keep public finances under control, limiting aid to loans to the most vulnerable households.

IHS Markit is consequently expecting GDP to fall by 9.5% in Mexico during 2020, but for a far smaller decline of 5.9% is expected to be seen in Brazil. Growth of 4.3% and 3.6% is expected respectively for 2021, but the larger expansion signalled for Mexico is less impressive given the steeper downturn of 2020. 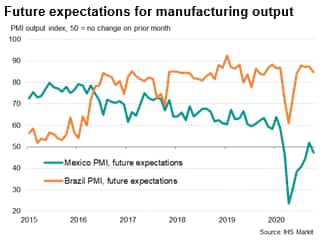