Reconnaissance Energy Africa Ltd (TSX-V: RECO) (ReconAfrica) recently spudded the 6-2 exploratory well within the Namibian portion of the Owambo Basin, onshore Namibia. It is the first exploration well to be drilled within the basin in almost 30 years and the most westerly to date. The company is hoping to establish the presence of a good quality source rock which in turn would open the basin to unconventional and potentially conventional exploration. It would also hint to the potential in analogous frontier basins in South Africa, Namibia, Angola, Zambia, Botswana and Zimbabwe.

The Owambo Basin straddles the Angola/Namibia border; Angola plans to divide its interior basins into blocks by end 2021, any success ReconAfrica has will likely expediate that process. The basin is located adjacent to the similar aged Okavango Basin in which large tracts are already licensed in Botswana and Zambia and will be subdivided into blocks in Angola. Analogies with the Nama-Kalahari and Karoo basins can be drawn, both of which are a focus for unconventional explorers. ReconAfrica compares the stratigraphy of its Namibian acreage to the central portion of the Karoo Basin, where supermajor Shell is awaiting the official award of acreage for shale gas exploration. The Council for Geoscience is currently drilling a deep stratigraphic well as part of its Karoo Deep Drilling Project aimed in part at establishing the quality of the Karoo Permian aged source rocks in the Ecca Group. In the Owambo Basin, the ReconAfrica drilling campaign will provide analogous data for the equivalent Prince Albert Formation.

There are currently two gas projects being advanced within the Karoo basin, neither of which are currently making use of unconventional techniques to produce. Renergen (ASX: RLT) holds the only onshore production right in South Africa and is looking to start LNG production from its Virginia gas project in late 2021, Kinetiko (ASX: KKO) another Australian-listed junior, was recently awarded a bulk gas production and removal grant and is planning pilot production. Within the Botswanan portion of the Nama-Kalahari Basins both Tlou Energy (ASX: TOU) and Strata-X Energy (ASX: SXA) are advancing Coal Bed Methane Projects, both Permian sourced and reporting large prospective resources.

Several Upper Carboniferous rift basins in the region may also receive an injection of interest including Zambia's Luangwa and Lukusashi basins and the Rafunsa Basin which straddles Zambia, Zimbabwe and Mozambique borders. Invictus Energy (ASX: IVN) plans to drill a conventional exploration well within its Zimbabwean acreage in late 2021; should the ReconAfrica campaign prove successful, it may improve Invictus Energy's prospects of partnering prior to drilling or indeed drilling at all.

Ultimately ReconAfrica's three-well campaign should shed light on Permian aged source rocks and possibly establish reservoir formations within the Owambo Basin. This may hint towards the potential in analogous basins. Any progress towards unconventional exploration is likely to face significant environmental resistance - water and protected areas being key issues within almost all of the basins that may show unconventional potential. 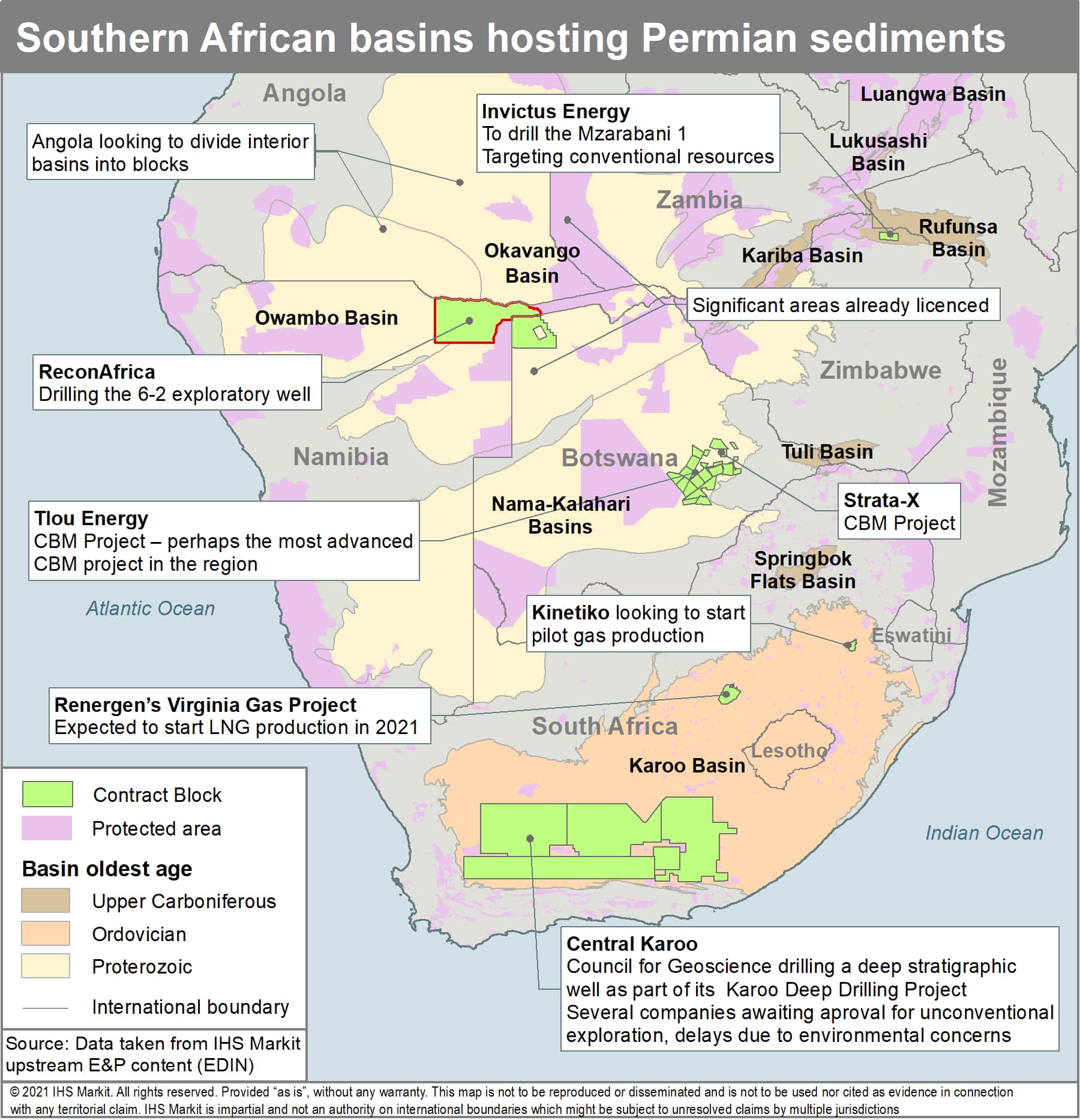 Learn more about detailed E&P activity coverage and context by country/territory.See more about our detailed data and summaries on wells, fields and basins.Learn about our asset evaluation, portfolio view, and production forecasts.