Racing for growth: Are oil and gas companies overheating the renewables sector?

Many large and primarily European oil and gas (O&G) companies—including Shell, BP, and Total—have significant expansion plans for renewable energies over the next decade, and the M&A activity of O&G companies in the renewables space has recently surged. This uptick comes at a time when many renewable markets globally are suffering from dampened power demand, low wholesale power prices, reduced government support, high competition, and low project margins. This incongruity creates concerns that O&G companies are pushing up renewable project valuations and overheating the sector.

IHS Markit recently published a report examining the role of O&G companies in low-carbon M&A, the impact on renewable project and company valuations, and how the investments are setting up O&G companies for long-term growth in the low-carbon space.

O&G companies are accelerating their expansions into renewables, driven by a challenged O&G market; short-term environmental, social, and governance objectives; and policy changes.

However, among the reasons behind the swings in investment patterns, one of the biggest catalysts has been a change in the perceived risk-adjusted returns of different segments of the energy sector. Indeed, since 2015, renewables and utilities have generally outperformed O&G in terms of profitability, and with less volatility (Figure 1). This is a departure from the traditional view that low carbon cannot compete with O&G from a returns perspective. 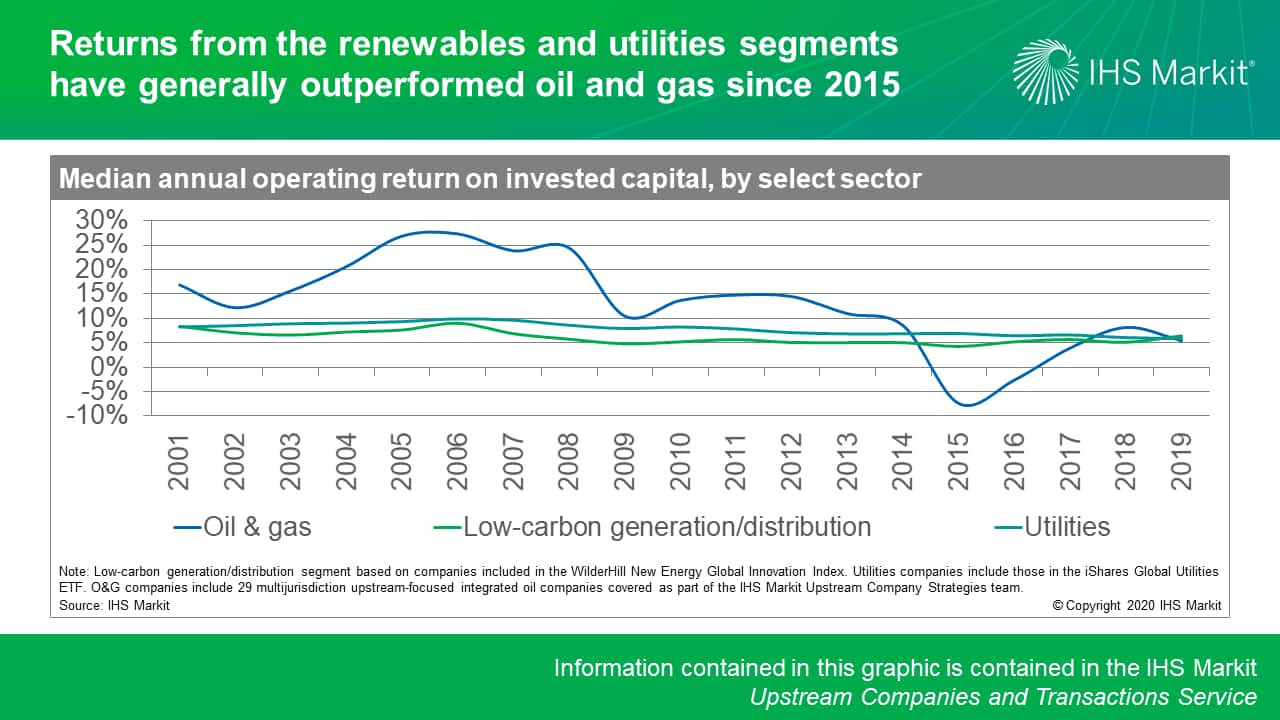 As a result, O&G companies have accelerated their transition to the low-carbon segment given the potential benefits of portfolio diversification, integration across the energy value chain, and greater clarity and stability of returns—all of which can help reduce portfolio risk.

While O&G companies have the impetus to rapidly make their mark in the renewables space, they are entering a market with dwindling profitability and fierce competition. The fragmented renewables sector is already consolidating in favor of some well-established power companies.

The vast scale of O&G company commitments and the high return expectations of O&G companies, alongside this competition from other market participants, are heating up the M&A market for sizeable companies or developers with large and well-advanced asset portfolios.

The uptick in the valuations of large renewable players and well-advanced assets—and the resulting reduction in the margins that the acquirers can expect—comes at a time when, in fact, numerous renewable projects face financial difficulties stemming from dampened power demand, reduced public support, intense competition in renewable auctions, and/or capital flight.

These market challenges mean that alongside the battles for takeovers there is market interest in partnering and risk sharing. Indeed, large power utilities and independent power producers are often keen to share the equity burden with partners.

Over time, O&G companies can shift renewable investments from the M&A space to their own greenfield projects, hence calming activity in the secondary market

The inroads made by O&G companies should allow them to progressively gain experience and later reposition themselves as low-carbon players through more organic growth.

Indeed, the M&A activity of O&G companies has focused on investing in low-carbon companies rather than assets. Consequently, O&G players are gaining not just one-off project returns but also access to project pipelines, expertise, and long-term business visions.

Also, O&G companies are trying to differentiate themselves, either through investments in less mainstream or nonpower technologies (including operations closer to their traditional core activities) or by taking on a different risk profile than their competitors.

With these developments, O&G companies can be much more than contributors of capital to the renewables space. Instead, they can add value by offering a different risk appetite, integrating renewables into portfolios of other alternative energy fuels and technologies, bringing in new client networks, promoting research into otherwise underfunded or longer-term solutions, and finding new ways to unlock value from low-carbon energy.

Etienne Gabel is a senior director for the Gas, Power, and Energy Futures team at IHS Markit.