First, a hybrid gas-electric approach to space heat decarbonization in cold climates addresses the "peak challenge" posed by an all-electric pathway. Using only electricity to decarbonize space heat is possible but requires a considerable expansion of electric power infrastructure capacity. Though ASHPs move at least three times more heat energy than the electrical energy they consume on average, they cannot match the peak heat output of natural gas furnaces at low temperatures without their capacity being oversized or supplemental electric resistance heat (see Figure, below). Therefore, universal electrification of residential and commercial space heating could more than double peak power demand from today and even triple or quadruple it in markets that experience subzero temperatures. Power generation, transmission, and distribution capacity would need to increase by a similar multiple to reliably serve customers, and the investment required to do so would only be utilized on the coldest mornings of the year. 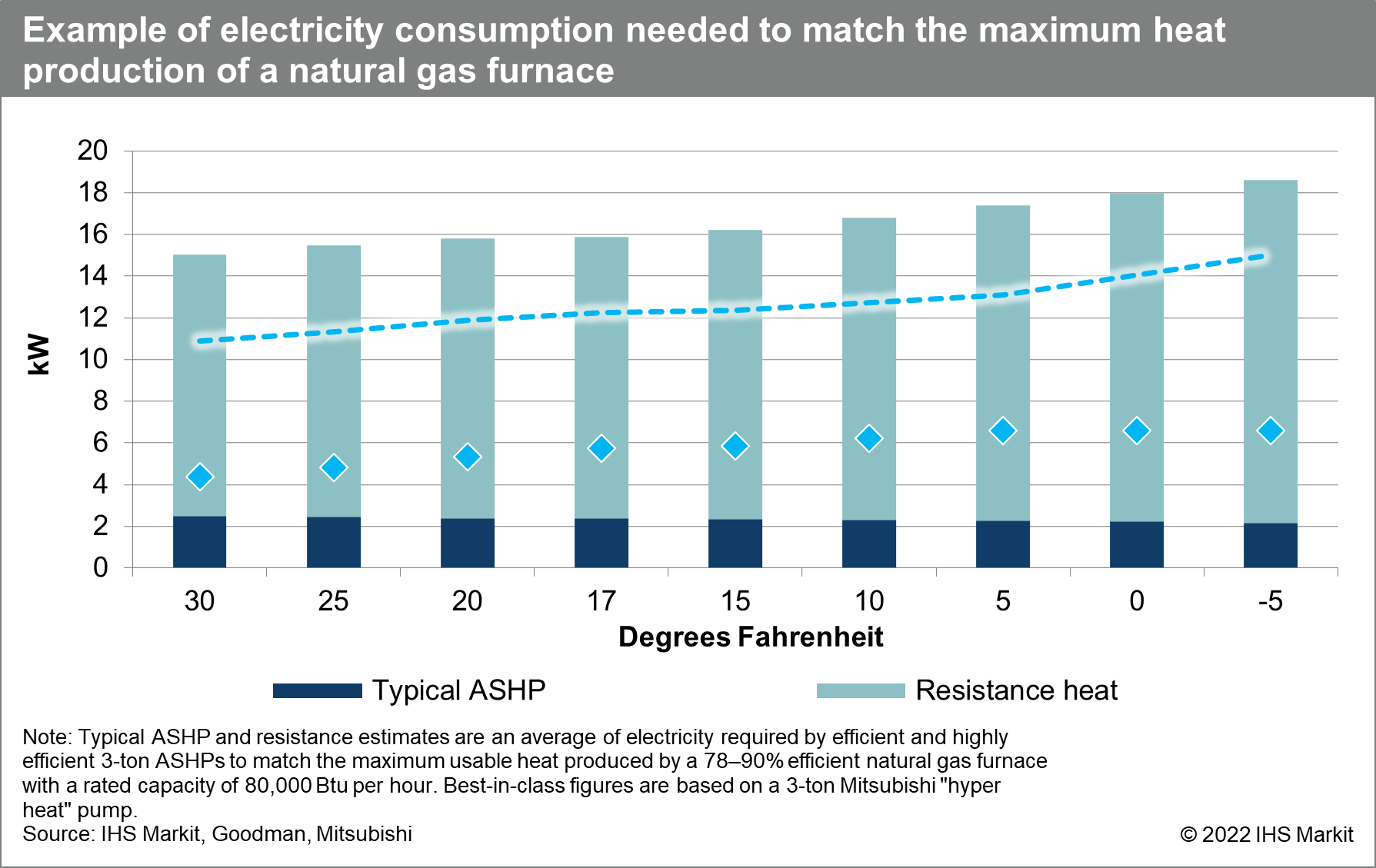 A more universal and manageable way to decarbonize space heating in existing buildings is to utilize existing natural gas infrastructure and pair ASHPs with natural gas furnaces. In this configuration, natural gas pipelines, storage, and furnaces act as a capacity resource for the electric power grid. When the temperature is moderately cold, like it often is during the winter, ASHPs can provide heat. The load factor of the overall power system would increase in summer peaking systems, which means that the average cost of electrical infrastructure would be lower than what it would be without any electric heat. Then, when the outside temperature falls to the point that buildings require considerable supplemental electric resistance heat, natural gas furnaces can be called on instead. Incremental peak power demand growth would be capped by the use of natural gas, and, therefore, additional electrical infrastructure investment would be avoided. Eventually, the remaining use of natural gas for space heating can be replaced by lower-CO₂ fuels, like renewable natural gas or green or blue hydrogen, if policy requires it.

Second, the dual energy program shares the cost of building heat decarbonization across gas and electric customers and mitigates the cost impact of lower natural gas demand on natural gas customers. Electrification will cause retail gas prices to rise because the ongoing expenses and investment costs required to maintain the gas distribution system will not fall as fast as demand. Higher gas prices would most impact customers that cannot easily reduce their gas consumption and customers that delay the purchase of ASHPs. To mitigate the disproportional impact that electrification could have on some gas customers, Hydro-Québec will pay Énergir for gas demand lost to electrification so that electric and natural gas rates increase by roughly the same percentage. The transfer payment from Hydro-Québec to Énergir does not alter this aggregate outcome for society. It merely distributes the ratepayer savings more equitably across electric and natural gas customers so that the relative cost of each commodity is practically unchanged after the government's heat decarbonization policy is implemented.

Third, the government of Québec recognized the need to involve and more closely align incentives for the gas and electric utilities. The government largely justified Hydro-Québec's and Énergir's dual energy program before it was proposed, determining that natural gas infrastructure had a beneficial role to play in achieving a major emissions reduction from building space heat. The government explicitly asked Hydro-Québec and Énergir for a joint decarbonization program and told the energy regulator that the cost of such a program could be shared across their customers.

In cold climate markets in North America, all-electric space heating policies would require a substantial expansion of electric power infrastructure, if electricity service is to remain reliable, and therefore require substantial capital investment that would only be used by customers on the coldest mornings of the year. State policymakers should find net benefits from a dual natural gas-electricity approach to heat decarbonization, like Québec did. When combined natural gas-electricity policies emerge, they will signal a maturation of state-level climate policy in North America—one that recognizes the role natural gas infrastructure can play in enabling CO₂ emissions reductions from building space heat.

Benjamin Levitt, associate director with the Gas, Power, and Climate Solutions team at S&P Global Commodity Insights, is focused on the analysis of regulatory and market developments in the North American electric utility sector.