In February 2015, IHS forecast that the conflict in Ukraine was likely to freeze at the line of contact between Ukrainian and separatist forces. Since then, fighting has continued in Eastern Ukraine but has stabilized in location along that line. Using geospatial analysis of event data, IHS was able to identify increases and decreases in the intensity and location of conflict, and in Ukraine's case, provide compelling evidence of a progressively well-defined area of fighting between the two forces, supporting the frozen front line forecast. This excerpt from the August 2015 report explains how data analysis and geospatial mapping can help inform qualitative analysis.

The value of using geospatial analysis to understand the trajectory of conflict lies as much in identifying where fighting is not taking place as in showing where it is. In the case of Eastern Ukraine, the current trajectory points to an eventual transition to a frozen conflict similar to the situation in Transdniestr in Moldova or Nagorno-Karabakh in Azerbaijan.

The completion of Ukrainian defensive positions is likely to entrench the current line of contact between the Ukrainian forces and the separatist militants. On 21 July 2015, Ukrainian minister for regional development Hennadii Zubko said that Ukraine had completed building defensive positions along the 600-km (372-mile) line of contact in the Donetsk and Luhansk regions. Permanent positions include three defensive lines along the line of contact, running from the Sea of Azov east of Mariupol, north toward the west and north of Donetsk, further north to Horlivka, and then turning east toward Luhansk along the Siverskyi Donets river. The strongest defenses have been built in the vicinity of Mariupol, Kramatorsk, and Sloviansk in the Donetsk region, which the Ukrainians see as the prime targets of separatist militants.

Geospatial analysis of security incidents since mid-2014 provides compelling evidence of the extent to which the conflict in Eastern Ukraine has already evolved into a limited conflict distributed across a clearly defined front line. The IHS Country Risk Analysis and Forecasting Team (CRAFT) looked at 3,669 security incidents recorded in the Foresight database, which took place in Ukraine over the 12 months from June 2014. 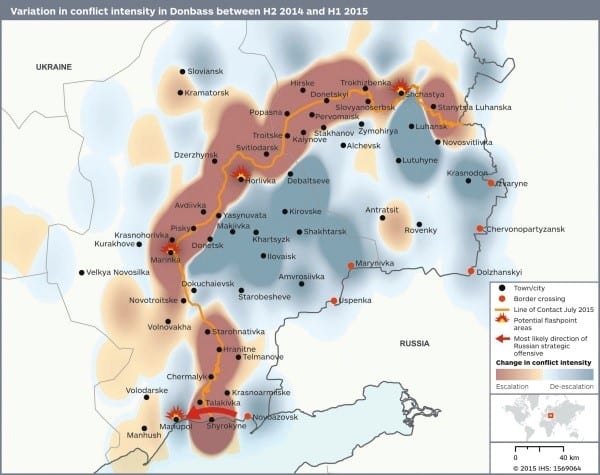 Each data point was coded to reflect the estimated impact of the incident in terms of damage to infrastructure and property, disruption to cargo, and physical risks to individuals. CRAFT then applied density analysis, a method that factors in the impact of the incidents, as well as their frequency and location, enabling the identification of notable hot spots in violence at different points in time.

The first map shows the distribution of the conflict in the second half of 2014 and reflects in particular the period of significant escalation in August and September 2014, when separatist militants re-established control of large parts of Donetsk and Luhansk with more direct support from Russian armed forces.

Fighting during this period was intense but relatively dispersed across the two provinces, compared with the distribution in the first six months of 2015, shown in the second map. This period saw the gradual consolidation of the conflict around a clearly defined and increasingly fortified line of contact. 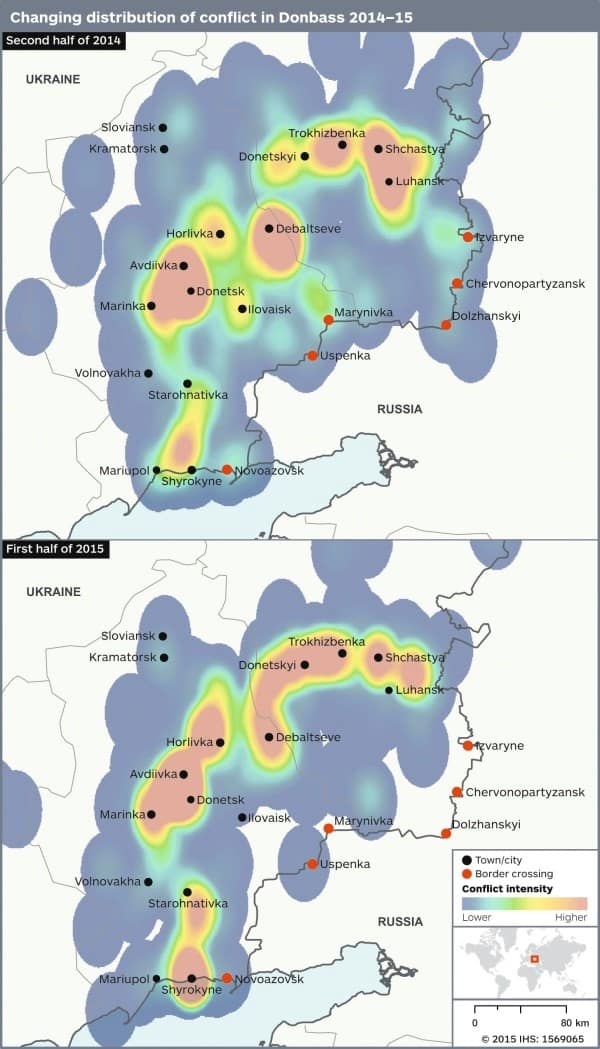 The "normalization" of the conflict that took place in the first half of 2015 is brought into sharper focus in the delta map above, which shows the variation in violent-risk intensity between the two periods. The map identifies, in dark red, areas that experienced the greatest increase in conflict intensity between the two time periods, and in dark blue, areas that experienced the greatest decrease in intensity.

Significantly, the largely contiguous, crescent-shaped red area, where the intensity escalated the most, maps almost directly onto the current line of contact-one that has been largely maintained since the February 2015 capture by separatist militants of Debaltseve, a key rail and road hub and separatist objective. Of 1,994 security incidents recorded by CRAFT in the first half of 2015, 75% occurred within 10 kilometers (6 miles) of the current line of contact.

Currently, there are few active conflicts that are as clearly delineated as that in Eastern Ukraine, although there are numerous examples of conflicts now frozen along similar boundaries defined by a historic escalation.

When subject to the same analysis, other contemporary civil conflicts (for example, in Libya, Nigeria, Somalia, or Syria) present an altogether "noisier" picture, with multiple noncontiguous hotspots of escalation and de-escalation occurring simultaneously. A range of factors explains the position of this line of contact, including the terrain, such as the flow of the Siverskyi Donets and Kalmius rivers, and the military imperative to hold urban centers rather than surrounding open countryside.

Moreover, IHS assesses that the current Russian strategy in Ukraine is aimed at maintaining a military stalemate by supporting the separatists without staging a direct and overt military intervention. Such a strategy is more conducive in the short term to sporadic flare-ups in armed conflict rather than to major offensives intended to make substantial gains.

A frozen conflict is not inevitable, and a pure geospatial approach cannot account for intent-namely, whether Russia will instead choose to escalate the conflict and support new separatist offensives aimed at expanded de facto territorial control. The analysis can, however, inform an understanding of how such an alternative scenario would play out on the map.

Since this report was written in August 2015, the line of contact has become more firmly entrenched, with a significant de-escalation of the conflict given an effective ceasefire in place. There were approximately 150 ceasefire violations per day in mid-August, but only several per day by early September. Since then, on most days there have been no ceasefire violations, and both sides have been withdrawing their heavy weapons from the line of contact. On those rare days when there are ceasefire violations, they involve light firearms or machine guns, and as a result, very few casualties or collateral damage.

[5/5] Congratulations to all those recognized as part of the #HERRoleModels20. We are honored to have our colleague… https://t.co/NdUl2N4V5q

[4/5] Andrew Eisen is a sponsor for Women in Tech, he has helped develop a mentoring program that nurtures women’s… https://t.co/jd2dvk8Wbx

[2/5] Sari Granat is committed to elevating and inspiring others to push for self-advancement and is a valued mento… https://t.co/asTFMMUNeE