The Greek Exit: Bad for Greece; uncertain for Europe

Following the high drama of late June-when Greece entered arrears with the International Monetary Fund loan and its eurozone membership was in serious doubts-in early July Greece and its eurozone lenders began negotiations on a new bailout plan, the third since 2010.

With a crisis averted and a late-August deadline looming, the risks of Greece leaving the eurozone over the short term have diminished. But the possibility of a "Grexit" remains, which would have consequences for other eurozone members and the global economy.

Indeed, there is no scenario for a Greek exit from the euro that would not have a significant impact on its economy and society. However, with regard to the rest of Europe, the political and economic implications of a Greek exit could be either profound or transitory. 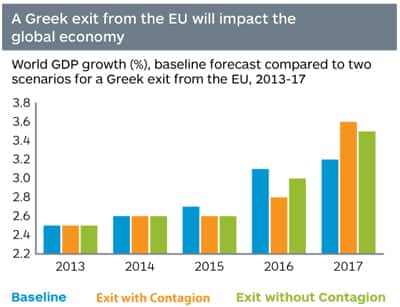 If Greece were to leave the European Union and abandon the euro, there would be a sharp increase in inflation. The introduction of a new currency would raise the burden of Greece's euro debt.

A euro exit and sovereign default go hand in hand. That is, any improvement in Greece's export performance would be offset by the difficulty in obtaining financing from international credit markets. Greek exporters would suffer.

Withdrawal, combined with the inevitable disruptions, would trigger broad anti-government protests and radicalize groups on both the left and right. In such a turbulent climate, reform would become increasingly difficult, and problems of corruption and tax evasion would worsen.

For Europe, a Greek exit could play out in one of two ways. In the first scenario-"without contagion"- Greece's exit results in a new bout of financial market stress. However, a weaker euro, which makes exports more competitive, would mitigate the stress, particularly in countries where exports account for a large share of GDP, such as Germany and Ireland. Europe's security environment and risk of social unrest would remain unaffected.

Nevertheless, there is a second scenario-"with contagion"-in which Greece's exit generates intense speculation about other debt-laden countries, namely France, Italy, Portugal, and Spain. This would increase political instability in those states and encourage them to use the threat of withdrawal to argue for the softening of fiscal reforms.

There has been an overall rise in support for anti- austerity and anti-EU parties across Europe. And in this scenario parties at the political fringes will gain ground, creating economic and political instability across a broad swath of society.

U.S. jobs recovery depends on small business, which remains under great threat. Get the $INFO:… https://t.co/0p4pBC3aCU