Winners and losers from the great oil price deflation

The dramatic oil price decline has had a significant impact on many countries' budgetary and external accounts, growth prospects, funding, and ultimately sovereign risk ratings. Some of these effects have been immediate and intense. For example, risk ratings have been hit particularly hard where lower oil export revenues have placed downward pressure on countries with limited foreign-exchange reserves. For importing countries, the positive impacts typically have been less dramatic, taking a supporting role to other factors such as political and policy developments.

IHS Sovereign Risk Service is undertaking a similar impact-diagnostics analysis that applies lower energy prices to both short-term (ST, one year or less) and medium-to-long-term (MLT) sovereign ratings models for 204 countries of the world. Initial overall findings are presented in the table below, together with two case studies involving a negative ratings impact affecting Russia, of key importance within Europe for its energy and geopolitical role, and a positive change for Morocco, highlighting the benefits of constructive policy shift within the MENA region aligned with a lower oil-import bill. The table lists those countries whose sovereign credit ratings or outlooks have changed because of oil price movements.

Rating dynamics do not reflect changing energy prices alone. For example, as a heavy energy-importing economy, Greece benefits strongly from oil price declines. However, the country's current economic and financial problems clearly offset the scope for positive rating action despite its lower energy-import bills and their positive impact on the external current-account balance. The list does not include countries where there is such a significant "two-way" pull.

Although diagnostic assessment has been applied to all 204 sovereigns, the current list of rating changes is by no means definitive and will expand over time. Candidates for future change can be identified using IHS's Sovereign Rating Outlook. Each country's outlook indicates the next likely directional move in rating during the following 12-18 months if the new conditions persist.

Overall, there will be important economic growth (GDP) benefits from the one-off transfer of purchasing power from energy producers to consuming countries-currently estimated at some $1.4 trillion. Lower oil prices largely act as a windfall tax cut for energy-consuming countries. However, benefits to consumer expenditure and investment may take several months to emerge. While each energy-consuming country should realize additional GDP growth of between 0.1% and 1%, not all such changes justify a positive sovereign rating change. Energy-importing Europe is potentially the main beneficiary, according to the World Bank's energy-dependency index, gaining far more from low oil prices than the United States, which is much closer to energy self-sufficiency after its shale revolution.

Until it was undermined by market-based and geopolitical developments in 2014, Russia's sovereign rating remained near its peak of low-to-mid investment grade levels. However, from April 2014, Russia faced a Negative rating outlook-suggesting further ratings downgrades may ensue over the next 12-18 months-with a notable one-notch drop on the IHS sovereign credit risk scale in the fourth-quarter 2014 review to lowest-investment-grade levels at BBB-, or 40/100 on IHS's 0-100 numeric credit risk scale. More such downward moves are very likely to follow.

Even before the early-2014 Ukraine conflict, subsequent sanctions, and collapsing oil prices, GDP growth had slowed to just 2% on an annualized basis. Two years ago, Russia's Central Bank cautioned that without reform stimulating lackluster investment, Russia's energy-export-supported current-account surpluses-key to financing the federal budget and much investment and consumption-would be eroded to near zero within five years. Adverse events have since accelerated, making these gloomy forecasts look understated. 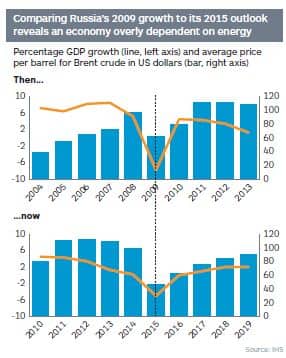 Russia has faced similar challenges before, notably in 2009 (see the comparison graphs above) when oil prices fell due to weak demand. Both periods demonstrate the shallowness of Russia's unreformed economy and its energy dependence. Then as now, an oil price crash generated sharp rouble depreciation and accelerated capital flight. Russia was forced to raise interest rates to fight surging imported inflation and rapidly declining foreign-exchange reserves.

Despite core similarities with 2009, there are also important differences. In 2015, the need to refinance hard-currency debt from the reserves represents a critical and inexorable "slow burn" downward pressure against reserve liquidity, with access to international capital markets blocked while sanctions remain active.

Russia has also faced second-round portfolio effects from rouble weakness generating additional speculative pressure to switch from rouble assets into alternative stores of value, whether dollars, euros, gold, or even real goods, with its largest banks effectively frozen out of international capital markets and increasingly reliant on state support, both to meet upcoming debt-redemption liabilities and to shore up Russia's corporate sector.

A key negative force driving recent rating actions is heightened nationalism. This represents a severe constraint on remedial and mitigation measures. Instead of policy change to address its international capital market position, there is a trend toward a policy of closed economic self-sufficiency. Unsurprisingly, Western investors have largely withdrawn or frozen investments. A deep recession seems inevitable: IHS forecasts a 5% contraction in Russia's GDP in 2015. Sanctions linked to Russia's involvement in Ukraine and its deteriorating relations with the West further contribute to an abnormally adverse business environment, encouraging capital flight and blocking investment.

Morocco is a clear example of a policy shift inducing a positive impact on a government's fiscal position. After a decade of strong economic growth, in 2011-12 Morocco's economy faced multiple external and internal pressures. Adverse factors included high international oil prices, the EU debt crisis, social unrest, and transitional upheavals in Arab Spring countries. Agricultural output weakened after drought in 2012 and consumer spending suffered as remittances from Europe stagnated in 2012-13. These factors, alongside the government's policy responses and expanding subsidies, helped push Morocco's fiscal and external deficits significantly wider. IHS downgraded Morocco's short-term rating during the second-quarter 2012 review, raising the score from 5 to 10.

These adverse trends were reversed after a change of government and shift in policy direction. In October 2013, the ruling coalition, led by the Justice and Development Party, moderate Islamists, joined with the center-right National Rally of Independents to replace junior party Istiqlal after protracted negotiations. The establishment of the revised coalition ended uncertainty that had delayed policymaking and undermined financial market confidence. Under the new government, reform has accelerated. The fiscal deficit fell from its 2012 peak of 7.4% of GDP to 5.5% in 2013; a 4.9% outcome was expected for 2014. In parallel, an improved foreign direct investment (FDI) environment has stimulated export-oriented industries, narrowing the current-account deficit to around 6% of GDP. Foreign-exchange reserves have improved markedly to above four months import cover. FDI inflows have financed much of the external deficit, reducing international borrowing needs and replenishing foreign-exchange reserves both directly and indirectly through new exports (primarily autos and aviation products). 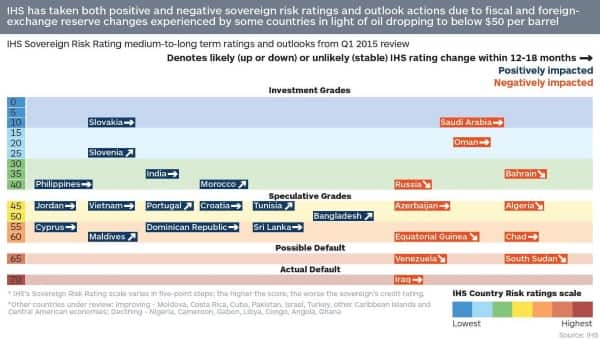 In late 2014, falling oil prices reinforced the improving economic and credit prospects in Morocco, which depends heavily on imported energy, by boosting the already improving current-account deficit. The imported energy bill accounted for about 24% of Morocco's total merchandise imports in 2014, as compared with 27% in 2013, when global oil prices averaged about $10 higher per barrel. Lower energy-import bills boosted the already improving current-account deficit and Moroccan authorities were very fortunate that lower oil prices coincided with the launch of fuel subsidy reform, which was first announced in January 2014, lessening the impact on consumers. Morocco has now removed subsidies for all liquid petroleum products-except in the power generation sector-while expanding transfer payments to the most vulnerable. These policy actions follow the World Bank's recommendations for subsidy reform, which suggest removing inefficient oil-based subsidies that benefit heavy energy users and the middle classes disproportionately while targeting transfers to lowest-income groups directly.

IHS and others rate Morocco for long-term ratings within the lowest investment grade levels, at BBB- or 40/100 on the IHS 0-100 numeric credit risk scale. Meanwhile, its short-term rating is 10/100, reflecting a strong payment capacity over the next 12 months. IHS also changed Morocco's credit risk outlook from Negative to Stable in the fourth quarter of 2014 and changed it to Positive in the first-quarter 2015 review. Furthermore, in July 2014 the International Monetary Fund (IMF) endorsed Moroccan policy progress with the announcement of a $5-billion two-year Precautionary Liquidity Line (PLL)-largely an extension of the previous 2012 PLL-recognizing lower internal fiscal and external current-account deficits, welcome subsidy reforms, and the rebuilding of foreign-exchange reserves through healthy FDI flows, expanded exports, and a lower oil-import bill. Continuation of these favorable trends should permit the PLL to remain unused, with Morocco potentially able to avoid borrowing from the IMF.

RT @CERAWeek: .@IHSMarkit's @DanielYergin shares his insights on the technologies needed for the energy future, while discussing his new bo…

RT @CERAWeek: So far, the energy transition has been, in the words of @Atul__Arya Chief Energy Strategist @IHSMarkit, "the phase of energy…

RT @CERAWeek: Curious what to expect during Day Two of the fourth annual and first virtual #IndiaEnergyForum by #CERAWeek? @IHSMarkit's SVP…