The waning supercycle's impact on the supply chain

By their very nature, commodity prices are extremely volatile and fluctuate due to a variety of factors: supply and demand fundamentals, investor sentiment, and macroeconomic policy decisions. And, unlike products whose prices continually increase in an inflation-like manner, commodities can experience long periods when their prices actually fall.

According to IHS' Material Price Index, commodity prices doubled between 2002 and 2004-a pattern that repeated itself between 2004 and 2008 (see figure). Although historically strong commodity price cycles have been observed in the past, such dramatic price growth had not been seen for some time and, hence, many analysts began referring to this recent episode as a "supercycle."

Driving the supercycle were loose monetary policies with very low interest rates and emerging-market growth. But lying behind these forces was a nascent fear of growing resource scarcity; that strong growth in the big emerging markets would ultimately tax the planet's physical resource base. China, for example, went from consuming approximately 10% of the world's commodities in the early 2000s to consuming 50% of them by the end of the decade-a huge footprint in the raw material markets. 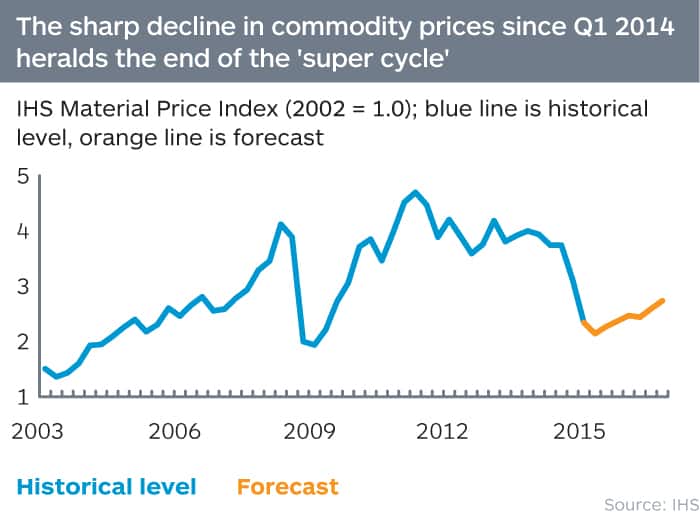 China's growth has since waned to the point where we now speak of the downside of the supercycle. The correction has been broad based and includes not only the 60% plunge in oil prices, but also a 30% decline in non-oil commodity prices. Copper, for example, was trading under $5,900/metric ton in early March compared to $7,000/metric ton just six months earlier. Iron ore is another example-spot prices that stood at over $130 per metric ton in January 2014 had slid to half that price just one year later.

While we now believe the low point for commodity prices has been reached in the second quarter of 2015, cost pressures downstream will continue to unwind across the third quarter. That is because it takes time for the entire supply chain to feel the "trickle down" impact of lower commodity prices. A finished goods manufacturer, for example, may not feel such impacts until months after they begin happening at the raw goods level.

Current conditions in commodity markets present both opportunities and challenges for global organizations. Internally, companies are asking themselves how to cut costs, improve processes, and better manage their business in a volatile environment. Buyers, specifically, are presented with opportunities. How can they capture savings? How can they evaluate the impact on their suppliers' cost structures and thereby push for lower prices? Regardless of which side they are on, organizations are taking the steps to either leverage the end of the supercycle or guard themselves against its negative effects.

RT @cnbcipr: Chris Williamson, chief business economist at @IHSMarkit, explains the latest PMIs out of the euro zone on #StreetSignsEurope…