Sedans have been the mainstay of the US new-vehicle industry for many years. From 2004 through to 2013, the traditional "three box" sedan was consistently the most popular body style in the country, accounting for 30-40% of all new-vehicle retail registrations. However, 2014 saw an inflection point in body-type share, as for the first time sport utility vehicles (SUVs) outpaced sedans among individual buyers. SUVs' share of the market, which includes crossover utility vehicles (CUVs)-essentially an SUV with a unibody architecture-has climbed more than 8% since 2005.

The changing mix of the industry at the segment level further illustrates the growing popularity of the SUV/CUV body type. Looking back 10 years, the non-luxury midsize sedan segment was consistently the largest in the industry. With popular models such as the Toyota Camry, Honda Accord, Nissan Altima, and Ford Fusion, this segment has long attracted mainstream families and stood at the center of the new-vehicle market. However, in 2014 the non-luxury compact crossover category supplanted the midsize car category. The small, non-luxury CUV segment's share has been a contributing factor, as it has climbed almost 5% in market share since 2009 and now stands at 15.7% versus 15.1% for midsize cars.

Why the shift? The SUV body type, which is increasingly dominated by crossovers, offers the best of both worlds. The driver enjoys a high seating position, greater ground clearance, all-wheel drive in many models, more cargo space, towing capability, and the fuel economy and riding characteristics of a car. 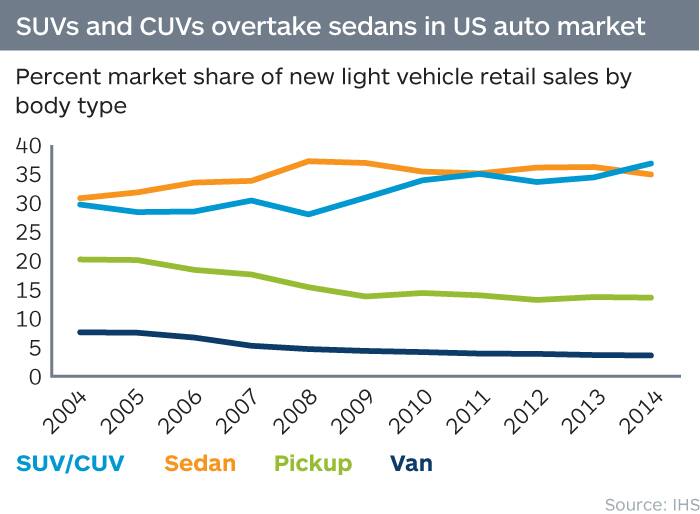 Many all-new crossover models will be arriving in dealer showrooms in the next 2 years, therefore the SUV/CUV body style will likely remain popular at least in the near term. Upcoming models include the Land Rover Discovery Sport, Tesla Model X, Chevrolet Trax, Jeep Renegade, Mazda CX3, Fiat 500X, and Honda HR-V.

The move toward SUVs and CUVs has several ramifications. Firstly, since original equipment manufacturers' margins are believed to be higher for these vehicles than for the traditional sedan, the increasing popularity of SUVs bodes well for their financial performance. Secondly, full-line manufacturers will need to offer an SUV/CUV in a range of prices and sizes-midsize, compact, and sub-compact-to retain and potentially grow market share.

Will the sedan configuration continue to lose favor as SUVs and CUVs proliferate? To date, the sedan share has slipped slightly but remains formidable. But if the inherent advantages of the SUV configuration begin to substantially outweigh those of the sedan in the view of the buying public, it is possible the sedan will become marginalized, while the sport utility becomes an even more dominant part of the new-vehicle landscape.

At IHS Markit, we believe that by working with others, we can have a bigger impact in achieving a more sustainable… https://t.co/DdtWDlSj0n