Video: Years of lower prices for major grains and oilseeds ahead

In the next 5-10 years, there will likely be a move away from policy-led demand (and price) bumps and a continuation of the current decreased crop prices. 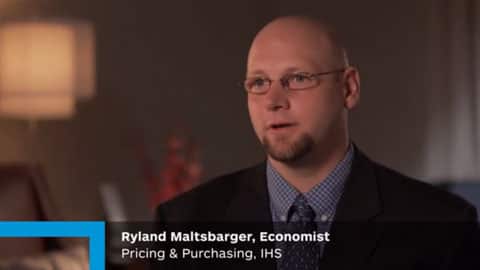 Are falling prices of major grains and oilseeds a short-term phenomenon?

IHS actually does not see the falling grain prices for major corn, wheat, grains, and oil seeds, to soybeans, and palm oil to look to be a short-term phenomenon. We actually look for the global market to be affected from a historical perspective, from policy lifts that we've seen over the last decade. So we saw some lifts up and changes in trade, and from trade across China, US and global players in agriculture, actually changed their policies that held stocks and did other things that changed the overall balances in the world that's affected prices. As well at the same time we saw biofuels come into play against major developed economies that changed some of the extra demand, and we saw a blip up or a move up in the demand on the global agriculture scale. So during this period we saw, like, corn prices go to historically high prices such as potentially eight dollars, seven dollars a bushel at one point, and we've actually dropped down to over 50 percent of that since that high peak a few years ago. So what we look for in the long term is actually, move from these policy-led bump ups in demand that we've see over the last decade lead toward actually a declined level in prices going forward over the next five to ten years, and move back to, just based on food growth demand dynamics across global agriculture.

IHS sees global food demand not necessarily slowing but diversifying across regions. So as we look at the world agriculture system and diversification of different areas globally let's say within developed regions such as the US, the EU, Japan, we've seen diversification of foods from grains, oils, seeds, meats and so forth, and we've also seen more of a plateau of how much we consume on calorie per capita consumption across the different regions, but they've kind of stopped, they've stopped growing. We see some population growth still, overall demand grows because of population growth, but how much we consumer on a regular basis every day has really started to satiate in this case. So when with growth, we have population growth that drive some, but when we look globally - in China we've had massive growth over the last couple of decades in how much calories are available to their populous as they brought in more income to help drive this. And so where we go from here though is that, over the next ten years they're reaching a level that's close to the developed levels of available calories for their populous. Some of this is from pork and meat, and other vegetable oils being a big part of the growth over the last 10, 20 years. And so as we look forward we do see that start to, you know, plateau within that region. You know, other regions of growth still remain within India, Africa, we still have a lot of potential there in grains, major agriculture products to drive it, not just diversification, meats, tree nuts and other type of products. But we do see a lot of growth still in other regions that are going to help drive - are we at peak food? That was a question I've had recently. No we aren't at peak food. It's just some of it will change. What we've expected to be the drivers over the last, you know, two, three, fifty years, let's say, have changed a little bit; less grains, less potatoes, pulses some of these…so we see more fats, oils, things that more calorically dense areas such as in Africa, eggs. Some of these things that will bring in different calories for some of these regions. And we'll have overall demand continue to increase as population continues to increase, even at a slower rate.

What factors will change the pricing environment?

As we move forward, you know, through the years to come: five, ten years, twenty, thirty years as well, with global agriculture there's always the risk of weather, climate change, impacts that affect the availability of production of food. That's always going to be a factor that changes year to year, you know, tsunamis, hurricanes, droughts, all these will change pricing dynamics. We can see price jump back up to record levels within a couple of years, if we have a major impact on major producers in different areas around the world.

Longer term we do see, you know of course, weaker prices because of weaker demand, or slower demand pace - but really the unknown that surround climate change; how much impact be in these different regions? The environment and then the other big factor is policy. Agriculture has always been linked with policy when it comes to food and security, food availability across different regions really affects policy makers, food, you know especially in developing worlds, where it's much more closer to…where it's produced is where it's consumed.

So over the next 10, 15 years, who's going to make the food policy shifts? Is it the food security issue that we saw in Asia over the last 10 years? Or is it going to be a, you know, have we, do we have weak prices for 10 years in biofuels and other things that come into the market to help support demand, to help support producers - do those come back? So those are the unknowns: we have the climate, we have the environment, we have where we produce being an issue or potential issue, and then we have policy makers that are going to change things from year to year who's opening trade, who's closing trade. All of these things are the big, impactful unknowns as we move toward the next five to ten years.