Video: The outlook for steel 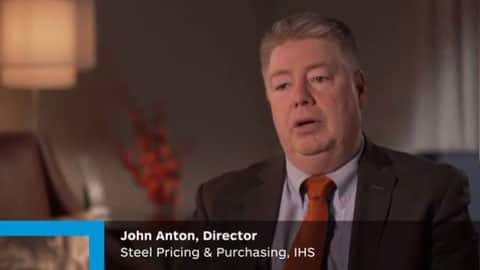 Are there geographic disparities in steel for 2014?

2014 has been a rather strange year for the steel industry. Prices started out higher at the beginning of the year in North America than almost anywhere in the world and North America's trended upwards whereas Europe and Asia have trended down. So what was about a $100/ton gap has grown to $200 or more for almost every product. And so you're looking at very wide geographic disparities and it has various ramifications for the end of the year for 2015 and beyond, and some of those ramifications are rather strong. What you're looking at are prices in North America which are: the mills are profitable, they're not making huge profits but they are profitable and they should be able to continue forward. Prices in China in particular but all of East Asia and in Europe are much, much worse and it is our belief that many of the mills are not covering cost, that you're looking at prices for reinforcing bar that are around $650/ton in North America; in China, you're looking at prices just over $400/ton and that is a collapse.

It was just over $500 as recently as September, so prices are falling and they were already ridiculously low in China. And Europe is being pulled down with the Chinese and so they are hurting as well. We're looking at, therefore, mills actually getting in financial trouble. We believe at $400/ton, mills are not able to cover cost -- that they're losing money, they've lost quite a bit of money in 2013, they also lost money in '14, '12… they've been losing money for the last several years and we expect that that will by early next year, mid-year at the latest, you'll start seeing a lot of mills close.

What that means practically for right now is that prices are about as good as they're going to get in Europe or Asia. It's really a one-sided bet. Prices can't go down much more; they're already so low that there's very little room for prices to go down. However, if mills start going out of business as we expect, the survivors will raise prices very sharply and therefore you could be looking at higher prices in 2015. So what it's setting up is it's a buyer's market here to close 2014 -- it's a very good buyers market to close 2014 in Europe and Asia -- and there's really not much advantage to delaying and there's a possible very strong advantage to going ahead and committing.

North America is different. North American mills are not particularly overcharging, it's just that people in the rest of the world are undercharging. And imports are starting to flow into North America. The price disparity of $200/ton on a product that's $500 in China, $700 here, that's 40% more if the Chinese ship it to us rather than sell it domestically. And so it is attracting imports, and it's attracting quite a bit, some of the highest levels since before the recession. And therefore there is room for the prices to go down in North America. Now we don't think they go down far. There will be trade actions, there will be people fearing that if it's in a freefall that "if I order in December, it won't arrive until March and by then the price here could be lower." So we don't think that imports will truly make the market collapse here in North America, but there is downside risk.

Our basic forecast is that even in North America things start rising, but it's not as simple a story as it is in Europe and in Asia. And so that's what we're really looking at for 2014; the geographic disparities have really distorted the market and it has put out a different story for this market compared to Europe and Asia, which is rather rare. Normally the markets move in pretty close harmony. This is a very strange disparity.

2015 is a year where we see not only a price increase, but we also see risk mostly to the upside. Partly because prices are so low in so many regions, they can really only go the one direction, as I said earlier. But we also see mill closures and we think sole sourcing could be dangerous. We could be looking at literally up to 20-25% production cuts in China. This is not as draconian as it sounds; they've cut 17% in prior years in six months. But if you are sole sourcing from one of the ones who closes, then you have to worry about delivery.

In Europe, there is a major maker of special bar. That division is profitable but they also make other bar products, which are losing money very badly. And they're looking for a buyer, but if you're a European buyer of special bar, be aware that one of the biggest suppliers there in Italy could be in trouble. Not the special bar, but all the rest of it. So, sole sourcing is dangerous for next year because we do expect mill closures.

We do believe this is far less likely here in North America because the mills here have been profitable. It's more Europe and Asia where we see that. The overriding fear, and it's a rather strange one to mention because it's weather related, but in 2008 cyclones hit Australia and steel prices doubled in four months. In 2011, they had monsoon rains in Australia, coal prices went crazy so steel prices went up 50% in four months. It sounds strange to say "watch Australian weather" but the world is very dependent on Australia -- particularly Asia for Australia -- for raw materials: for iron ore and metallurgical coal. If there's bad weather there, we know from the prior two events when it happened, it destroyed people's budgets. So it is worth keeping an eye on.

Longer-term, what can buyers expect for steel and how can they use this insight?

The long-term outlook for steel is very good from a buyer's point of view. It will be a situation of excess supply, excess capacity globally. Most of it in China, but it's going to impact the rest of the world. And therefore any price increase that we have, like we expect for 2016, won't stick because any time prices go up, idle capacity will be restarted, supply will rise, and prices will come back down. So from a buyer's point of view, we expect a long-term very low cost market through at least the end of the decade, if not longer, until that excess capacity is worked off. So it's a better outlook basically for buyers than for sellers.

RT @CERAWeek: .@IHSMarkit's @DanielYergin shares his insights on the technologies needed for the energy future, while discussing his new bo…

RT @CERAWeek: So far, the energy transition has been, in the words of @Atul__Arya Chief Energy Strategist @IHSMarkit, "the phase of energy…

RT @CERAWeek: Curious what to expect during Day Two of the fourth annual and first virtual #IndiaEnergyForum by #CERAWeek? @IHSMarkit's SVP…