The European solar PV market saw around 11 GW of projects and pipelines changing hands in 2019, and the positive trend is expected to last as investors continue being optimistic on the future of the industry. Project acquisition activity is often considered a key indicator of the financial health in many sectors, including the solar PV market. It reflects optimism among investors, and a dynamic sector with a high degree of liquidity. New annual PV installations give an important indication of the size of the pool of operating assets that are available for M&A deals today and that will be available for future M&A deals.

After the PV market declined in 2013, Europe saw a renaissance in 2019, when more than 24 GW were installed, almost double 2018 installations. As a result, the cumulative installed PV capacity in Europe surpassed 150 GW in 2019. Nearly 40% of the capacity added in 2019 derives from utility-scale projects greater than 20 MW. New installations are set to surpass 20 GW in 2020, with Germany and Spain accounting for 36% of the capacity additions.

Moreover, throughout the past decade, PV installations in Europe have been supported by feed-in tariffs and green certificates, and lately by tenders and PPAs, making these assets attractive to investors in the M&A market today.

Major increase in M&A activity after 2017 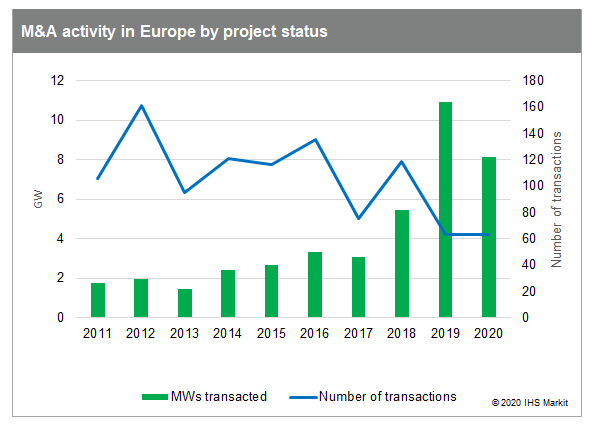 Until 2017, the majority of transactions carried out focused on operating assets installed under feed-in tariffs and green certificate schemes. To give a few examples, the United Kingdom's Renewable Obligation Certificate (ROC) program made UK assets an attractive investment option up to 2017. Several UK assets were transferred multiple times from pre-construction to operation and have then been acquired further by companies that seek to consolidate their positions in the market. In Italy, many operating assets are benefitting from previous support schemes such as Conto Energia, therefore also attracting abundant M&A activity. A large portion of French operating assets were supported by generous feed-in tariffs and subsequently by tenders and have therefore also been the focus of many M&A deals throughout the last decade.

The situation changed in 2018, when investors started buying project pipelines in anticipation of a renaissance of the European PV market.

Spain is the hottest market for M&A activity

Spain continues to dominate the 2019-20 M&A landscape for both operating assets and pipelines with around 9.4 GW of assets transacted over the last two years.

Specifically, Spanish pipelines accounted for 68% of all early-stage pipeline transaction in Europe between 2019 and 2020 due to the scale of its utility-scale market in 2019-20 and its expected growth in the next five years making it a key target market. Notable Spanish pipeline transactions include the 1.5 GW Bester Generacion pipeline acquisition by InfraRed Capital Partners in 2019 and the 1.2 GW pipeline acquisition by Total from Solarbay in 2020.

Spain was also the largest target country for deals involving advanced-stage projects (operating, under construction and permitted assets): Spanish assets accounted for 39% of all assets transacted in Europe over the past two years. Most of the transacted assets in Spain were built in 2019 or targeting completion in 2020 and 2021. For example, the Galp-ACS deal at the beginning of this year involved around 900 MW of projects in operation. Also in 2020, China Three Georges agreed to acquire around 500 MW of operational projects in Spain from developer X-Elio.

The Iberian country has nearly 11 GW of cumulative installed PV capacity. It had the highest annual installed PV capacity in 2019 of 5 GW, an impressive market revival after years of stagnation. It also has a significant amount of pipeline activity and assets under development, making it one of the top target countries for M&A deals.

A new market attracting attention in 2020 is Ireland. It recently had its first renewable energy auction which saw around 800 MW of solar projects assigned, as part of the Renewable Electricity Support Scheme (RESS). This resulted in several acquisitions as international players entered the market. One of the largest deals includes Statkraft acquiring 275 MW of permitted assets owned by Lightsource BP and several projects from local developer JBM, accounting for more than 300 MW. Four more rounds of the RESS auction will take place in the following years so further acquisitions are expected as the solar PV market in Ireland finally takes off.

Developers, EPCs and IPPs are selling to utilities

Similar to previous years, developers, EPCs, and IPPs were the major PV asset sellers in 2019 and 2020, and a significant portion of assets sold were pipelines. The two biggest transactions include: Spanish Bester Generacion sold its portfolio of projects, around 1.5 GW in Spain, to InfraRed Capital Partners, a global investment manager focused on infrastructure and real estate, and French PV company Urbasolar was acquired by Swiss company Axpo (Urbasolar's portfolio includes a 1 GW pipeline).

The top PV asset buyers for 2019 and 2020 are utilities, followed by IOCs and financial companies, and the top ten account for 60% (11 GW) of all M&A activity. The analysis on which this article is based includes transactions up to October 2020; the percentage of activity captured by the top ten buyers increases significantly once the November deal between Statkraft and Solarcentury is taken into account.

In the last two years, European PV markets saw record numbers for M&A transactions in GW terms. IHS Markit expects the positive M&A trend to continue over the coming years, as the majority of European markets transition away from wide-spread support schemes, and investors continue being optimistic on the resiliency of the sector.

To learn more about the IHS Markit solar research and its M&A research, visit our Downstream Solar PV Service page.

Martina Assereto is a solar research analyst for the Clean Energy Technology team at IHS Markit.