In recent years, increased attention has been given to the idea of mandating nurse-to-patient staffing ratios in US hospitals and nursing homes. Proponents of such mandates argue that higher staffing levels result in improved patient health outcomes and nurse wellbeing. Opponents argue that mandated ratios would increase administrative and cost burdens placed on hospitals and nursing homes (many of which are already on shaky financial ground and consistently struggle to staff some units), as well as create inefficiencies in care delivery by diverting resources from other health occupations to hire more nurses. To date, California is the only state with mandated nurse-to-patient ratios. In 2018, Massachusetts voters rejected a ballot question that would have mandated nurse staffing ratios across hospital units. Recently, ratio mandates have been proposed in other states (including Illinois, Ohio, and New York) and at the national level.

The Greater New York Hospital Association commissioned IHS Markit to investigate the workforce implications for registered nurses (RNs) of proposed legislation in New York that would mandate minimum staffing ratios for hospitals and nursing facilities. Study findings were presented at the May 2021 Group on Diversity and Inclusion & Health Workforce Research Joint Conference sponsored by the Association of American Medical Colleges.

The Safe Staffing for Quality Care Act, initially proposed in the New York State Senate in 2019 (and recently reintroduced), would require that acute care facilities and nursing homes implement minimum RN-to-patient ratios which are to be enforced at all times, including nurse breaks and unexpected surges in demand. The proposed ratios vary by hospital unit and range from 1:1 in the operating room, trauma emergency units, and labor stages 2 & 3, to 1:6 in well-baby nurseries.

Projections of future RN supply and demand were generated using IHS Markit's healthcare workforce microsimulation models. Projections of nurse supply adequacy were assessed under current staffing levels and levels reflecting mandates in the proposed legislation. Nurse demand was first projected under a "current state" scenario, which assumes current staffing levels remain constant over the projection period (2018-2030), and changes in demand reflect population growth and aging and changes in the prevalence of disease. IHS Markit obtained data on current nurse staffing levels and volume of patient care for a large sample of New York hospitals. Demand was then projected under a legislation scenario that modeled the increase in nurses required to comply with the proposed legislation staffing ratios and accounted for the extra nurse staffing required to cover nurses on breaks.

The supply of RNs in New York through 2030 was projected based on the current supply and estimated number and characteristics of RNs entering and exiting the workforce over time.

While the proposed legislation includes mandates for nursing homes, implications from those mandates were not assessed in the study.

Comparing projected RN demand under current staffing patterns (grey line below) to projected supply (green line below), the small current statewide shortage of nurses is expected to persist through 2030, though nearly disappear by 2030. However, implementing the proposed legislation (turquoise line below) would require almost 39,000 more RNs relative to demand current levels, leaving the state with nearly a 46,000 (24%) shortfall of RNs relative to supply. This shortfall would continue over the next decade, with a projected shortfall of over 45,000 (21%) by 2030. 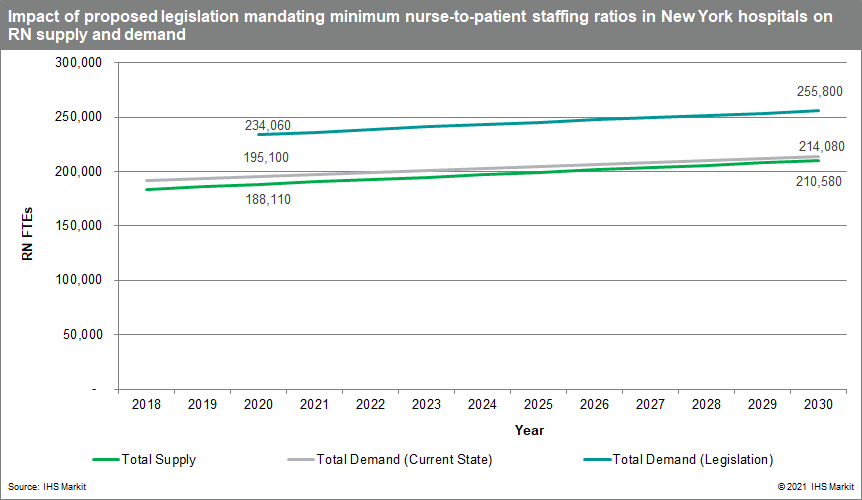 Study conclusions were that despite the arguments for or against mandated minimum staffing ratios in hospitals, currently, an insufficient number of nurses practice in New York to successfully implement the proposed legislation. Trying to implement such legislation without a sufficient supply of RNs could be disruptive to the market, potentially shifting available RN supply away from safety-net hospitals and rural hospitals that can least afford to lose nurses. New York hospitals might be able to recruit some nurses from other states, though many of those states themselves face shortages of nurses.