Mexico's power sector continues the transition toward a more open industry, most notably in the generation sector. Current total installed capacity in the country accounts for nearly 75 GW, with a 24% share for private generators, most of them under the legacy framework and a few others already operating under the new rules. In addition, there is an 18% share on installed capacity that is effectively owned by private generators, although the rights for such capacity and energy generated are owned by the Comision Federal de Electricidad (CFE), through the legacy independent power producer (IPP) model.

Despite the increasing penetration of private generators, the role of CFE is still relevant given its contribution in the newly created wholesale market, where the bulk of energy and capacity traded belongs to its generation subsidiaries (nearly 95% of the wholesale market capacity). However, the challenges associated to CFE's generation fleet are relevant for the operation of the new market. CFE's own capacity is 43 GW (not including legacy IPPs) and has a weighted-average age of 36 years. It is composed mainly of nearly 10 GW of oil-based capacity and more than 13 GW of gas-fired capacity, with the rest divided among coal, nuclear, hydro, and a small share of renewables. All these factors combined with the current financial situation, which holds back own investment capacity, challenge CFE's position in the generation sector and the system reliability into the future. 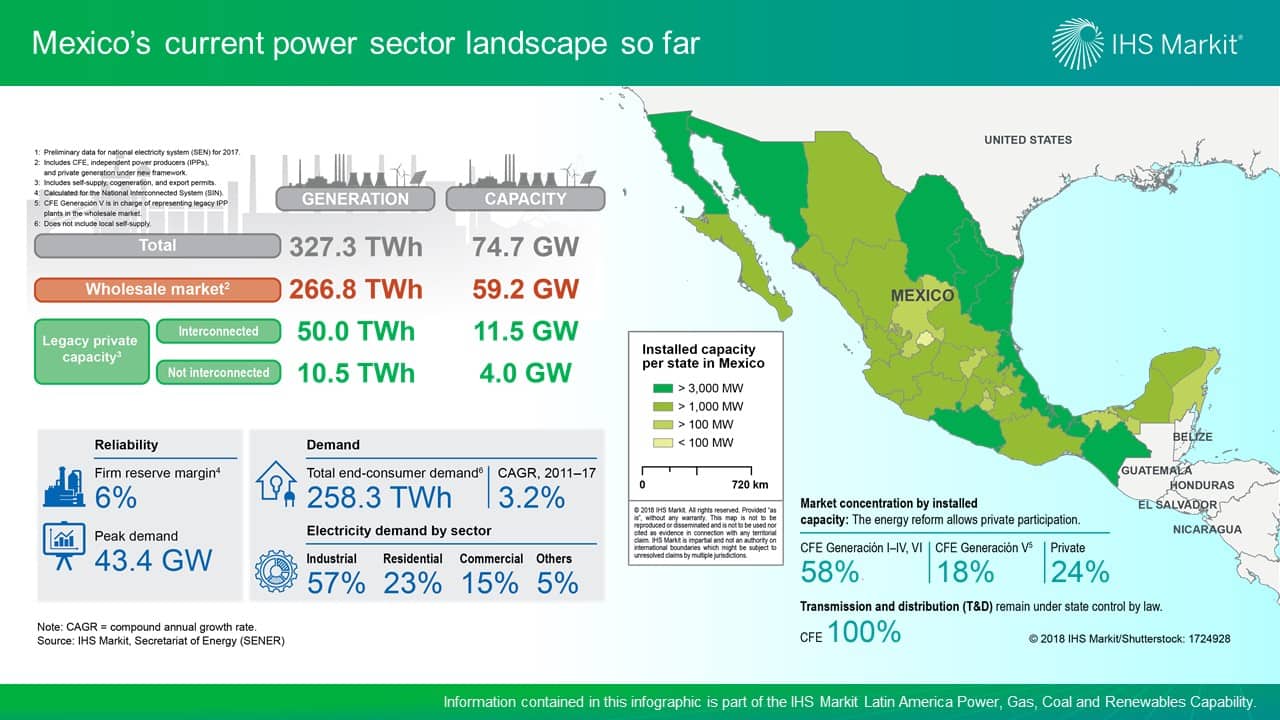 While power auctions are becoming a key mechanism to expand the clean energy share, firm generation sources will still need to find supporting and long-lasting mechanisms that keep pace with power demand growth and the eventual retirement of old and inefficient power plants. End-consumer demand's compound average growth rate has been above 3% in the last 7 years, while peak demand reached 43 GW in 2017, leading to a tight firm reserve margin of 6%. In 2018, the firm reserve margin has been reported to be lower than 5% in June, compromising reliability of the network.

Going forward, the expansion of the generation fleet will have to rely on new market mechanisms and private generators' ability to leverage their experience in the country to either invest in new power capacity or upgrade existing facilities. CFE's role will continue to be important, but it remains to be seen how important it will be under the new administration.

Learn more about our coverage of the Mexico gas and power as part of our regional power, gas, coal and renewables service.

Fidel González is a Research Analyst on the Latin American Power, Gas, Coal, and Renewables team at IHS Markit.

What does the #energytransition and low carbon future mean for the traditional #upstream industry? Bob Fryklund wil… https://t.co/3BcmkUGGnH

With #hydrogen’s potential to become a powerful enabler in the transition to a clean, low-carbon #energy economy, w… https://t.co/Ck05CmDGp0

Our experts discuss the role of #carbon sequestration solutions to reach #decarbonization targets & the opportuniti… https://t.co/VpIKQnAaMy