What does it cost to produce a barrel of oil in the Canadian oil sands-a source of supply often considered higher cost?

With the price of WTI falling below $US30/bbl (all prices in $USD unless otherwise noted) at the start of 2016, this is a question that has captured a lot of interest.

The cost to produce oil in the oil sands is made up of the upfront capital cost required to first construct a facility, the cost to operate a facility once it is online, and the periodic cost to sustain production by replacing worn out equipment or parts or, in case of in situ projects to drill new wells pairs over time. These costs, plus an assumed 10% return on investment, are often referred to as "full-cycle" costs.

On a full-cycle basis, IHS estimated that a new greenfield oil sands mine (without an upgrader) required a WTI price between $85 to $95 per barrel on average in 2015-to breakeven. An steam-assisted gravity drainage (SAGD) project required between $55 to $65 per barrel to breakeven. Expansion of an existing SAGD facility required about $5 per barrel less to breakeven. 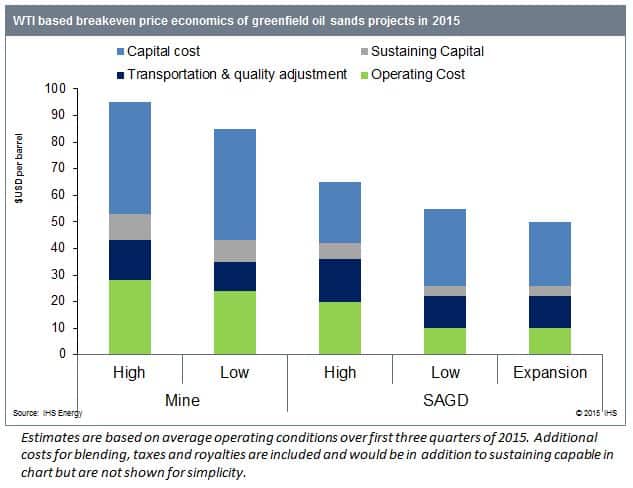 With oil prices at low levels, the viability of existing operations has come into focus

Despite cost reductions, as WTI prices fell below $30 per barrel early in 2016, the focus has shifted from full-cycle cost of new projects towards the ability of operators to continue to produce from existing projects.

In this discussion a lot of attention has been paid to operating costs. These costs are typically reported as a well-head or facility level cost. IHS estimated that the average field operating costs towards the end of 2015 for SAGD was just under US$10 per barrel of bitumen, and for mines with upgraders was around US$32 per barrel of synthetic crude oil (SCO).

These costs represent considerable improvement over 2014 when IHS estimated the average field operating costs for SAGD was about $13 per barrel and for mines was just over $42 per barrel. Further reduction may yet be possible as producers continue to explore additional ways to lower cost.

However, to capture the full cash cost to produce a barrel of oil in the oil sands, additional costs need to be considered.

Interpretations of operating cost are also complicated because SAGD and mining operations market different grades of crude oil that fetch different prices. SAGD typically market heavier bitumen blends that trade at a discount to WTI while mines with upgraders market lighter synthetic crudes that fetch a premium over WTI. These price relationships (typically the degree of premiums or discounts to WTI) may also vary depending on market changes (e.g. supply and demand changes or transportation issues).

Adjusting for the factors outlined above, IHS estimates that based on the market conditions in January 2016, the cash cost to produce a barrel of oil in the oil sands on WTI basis ranged a few dollars below $30/bbl to just above $40/bbl. Although most oil sands production fell in the lower end of this range, many oil sands operations would have still struggled just to cover the day-to-day cash cost to produce and market a barrel of oil. And this does not include the costs of covering periodic maintenance, corporate overhead or debt payments.

Although operating cost is an illustrative metric of the financial pressure a producer may be under at lower price levels, it may not be the best metric to answer the critical question of: "Will a material shut-in oil sands production occur?"

For all oil production, a decision to shut in is complex. It involves weighting several variables, including: the unique attributes of the type of oil production and reservoir characteristics; the owner's financial situation; oil price expectations; and the risks and costs associated with shutting-in production.

For a large oil sands operator there may be no point at which an indeterminate shut in would be tenable. There are a couple reasons for this thinking.

In 2015, IHS estimated that over 90% of production was backed by large oil sands focused companies and global majors. These type of companies typically have deeper pockets and a large portfolios of assets which they can rely on to offset price weakness, such as downstream refining or even non-oil assets. It is these companies that are more capable of weathering the current price volatility.

A shut in of an oil sands facility comes with considerable risk. This can be particularly true for SAGD projects that use steam to warm bitumen in situ to permit recovery. In the event that a prolonged shut-in were to occur and the reservoir allowed to cool, permanent damage could be done-potentially putting in jeopardy the life of the asset. With a production life of over three decades, owners of oil sands production will most likely make all efforts to preserve the asset.

A shut in of oil sands production is also not without cost. Even if production were shut in, oil sands facilities have fixed costs that will still need to be covered. This includes expenses to cover road access, essential maintenance or pipeline commitments. There may also be ongoing labor costs should the owner plan to restart operation in the future. Many oil sands barrels may also be vertically committed to downstream refiners. Moreover, in the example of a mine, it could take significant investment to restart operations potentially negating the savings from shutting in. Thus, day-to-day cash cost may not be representative of the economics, let alone risk profile, of a shut-in.

Counter-intuitively, the most logical strategy in a low price environment may be to defer all non-essential maintenance and strive for maximum output. This has the benefit of lowering the cost on a per unit basis. In 2015, the output of many facilities reached new heights.

Although conventional production is expected to decline in Canada in 2016, IHS does not anticipate any large scale commercial oil sands facility shutting in. To be certain, lower prices will impact oil sands supply. Production declines from primary oil sands-a process more akin to conventional production-are likely to accelerate (in 2015 primary made up just over 10% of supply). Despite the risks, shut-in of smaller oil sands production could increase the longer the even lower prices of early 2016 linger. Investments into new projects-projects not yet under construction-will continue to be deferred. In the event prices were to fall even further it is possible some in situ producers could curtail steam levels and volumes. However, any negative impacts to supply in 2016 would most likely be offset as new facilities already under construction ramp-up and existing facilities continue to maximize output.