Product mix for the domestic and Asian mainstream automotive makes

From 2006 through 2009, large vehicles as a percentage of total new vehicle registrations declined 10 percentage points to 20%, though this proportion has stayed constant in the last two years. Going forward, most automotive forecasts predict that large vehicles will retreat even further as gas prices rise and OEMs launch smaller, more fuel efficient vehicles (including hybrids and electric vehicles) to meet the upcoming CAFÉ standards.

Looking at the nine non-luxury mainstream makes, all of them have followed the industry pattern and shifted their product portfolios toward midsize and compact vehicles. But while the three domestic makes have indeed moved toward smaller vehicles, their overall mixes remain much more skewed to larger vehicles than the mixes of their overseas-based competitors. Between 40 and 50 percent of all Chevrolets, Fords and Dodges registered in 2011 were large vehicles. In contrast, none of the other mainstream makes had a mix of large vehicles above 11%. Three of these makes - Honda, Kia and Volkswagen - do not sell any large vehicles at all, and a fourth, Hyundai, is barely participating with a .3% mix. 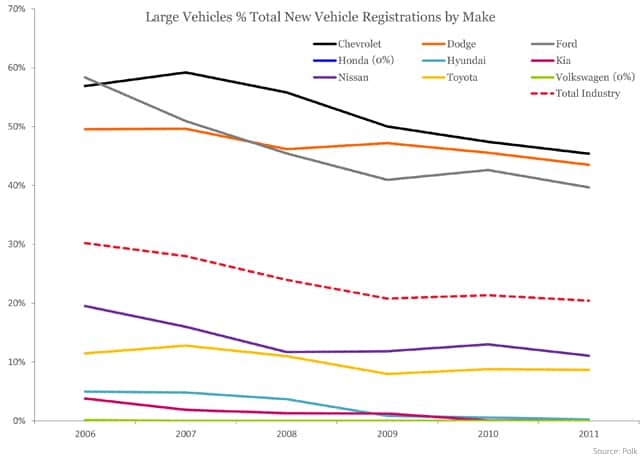 This landscape may give the impression that the Asians are better positioned than the domestics should gas prices continue to rise or suddenly jump due to a traumatic global event. It's not that simple. While the Asians indeed are focused solely on midsize and small vehicles, the domestics currently offer small, midsize AND large vehicles. The domestics dominate the large pickup and SUV segments, which offer high volumes and profits, something any OEM would covet. (Even though these segments may continue to decline, they will most likely continue to exist because their functionality is not provided by any other size/body type combination.) Yet the domestics now also market competitive small vehicles, though perhaps not with the same range of models and body types as some of their Asian competitors. But recently-introduced domestic small cars such as the Ford Focus, Chevrolet Sonic, Chevrolet Cruze (and upcoming Dodge Dart) are competitive with their Asian rivals, something that could not be said of domestic small cars as recently as 10 years ago. Thus the domestics have the luxury of participating in the small vehicle segments while also reaping major per vehicle profits on their large trucks, a luxury the Asians do not have.

All the mainstream makes now offer small cars and crossovers which will be increasingly in favor as gas prices rise. The Asians may have a slight advantage in the compact and subcompact categories because they tend to have a broader array of products. But the domestics have a financial advantage in that their large pickups and SUVs, even with declining segment shares, will provide much-needed profits that their competitors can't obtain.

Lastly, definitions of the words "large," "midsize," and "compact" are evolving. What is a large pickup today probably will not be on the market five to seven years from now; rather, "large" will be used to describe an F-Series or Silverado that is in fact much smaller than today's light pickup, and today would probably be labeled "midsize."