Prices for the 10 most critical drugs to treat COVID-19 have risen a highly unusual 4 percent globally during the crisis. The cost for over half of these essential COVID-19 medicines rose across 80 countries between February and June 2020. Global price increases were led by diazepam and azithromycin, which increased by 16% and 6.5%, respectively.

Normally, price increases for pharmaceuticals around the world are relatively rare outside of the United States, but our findings indicate that 24 countries showed price increases for drugs critical for COVID-19 treatment, with many of them on a scale we have not seen before. 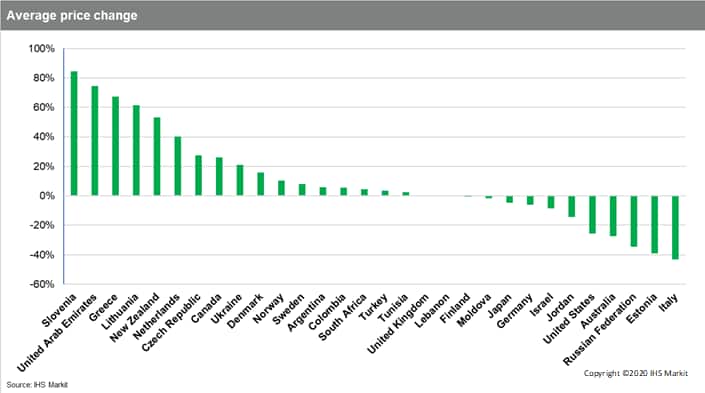 Prices of critical pharmaceuticals are increasing at a time that they are needed the most, and at a time when governments will potentially struggle to pay for them as they seek to support their economy elsewhere

Some smaller countries were hit with substantial price increases. Price hikes for versions of the 10 drugs in Denmark, for example, averaged at 71.6%. In the Netherlands and Sweden, they averaged at 43.1% and 37.5%, respectively. The United Kingdom had price increases of up to 49%, mainly for azithromycin.

The United States itself only showed one price increase - for one version of dexamethasone - and instead showed substantial price decreases for some versions of azithromycin, ciclosporin and ipratropium bromide.

The largest price increase was for dexamethasone, the only existing treatment to have shown increased survival data, which rose nearly three-fold in the Netherlands (+ 277%). Diazepam prices increased in Lithuania (+167%), Denmark (+128%), Canada (114%), New Zealand (+100%) and United Arab Emirates (100%). Denmark saw increases of azithromycin by two manufactures, with prices up by 142% and 109%, respectively. Prices of azithromycin increased in Czech Republic by 114%.

IHS Markit analyzed price changes for 10 critical treatments for COVID-19 globally from its pharmaceutical pricing database PharmOnline International (POLI): anakinra, azithromycin, ciclosporin, cisatracurium, clonazepam, dexamethasone, dexmedetomidine, diazepam, enoxpararin and ipratropium bromide - taking into account over 470 different products of these drugs. The list does not include experimental treatments such as remdesivir, which does not have a price or price movement in most markets.