Softwood lumber is the first material that comes to mind in light of post-hurricane reconstruction and rising prices. As the damage gets assessed in Texas and Florida, consumers may encounter another material with a higher price tag: gypsum wallboard.

Geographically, South Atlantic region (Delaware, DC, Florida, Georgia, Maryland, North Carolina, South Carolina, Virginia and West Virginia) has the highest share of wallboard consumption. It is followed by West South Central region (Arkansas, Louisiana, Oklahoma, Texas). Almost 40% of all gypsum sales take place in states that have been affected by Hurricanes Harvey and Irma, foreshadowing a higher demand from these regions due to reconstruction efforts. This is expected to put renewed pressure on prices. 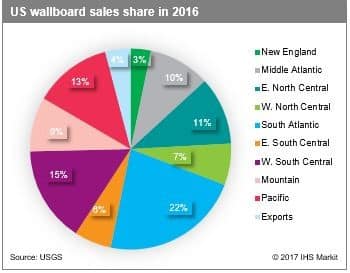 Wallboard prices have been climbing even before the hurricanes. At the beginning of the year, large producers such as United States Gypsum (USG) and National Gypsum announced annual price increases ranging from 5% to 20% for 2017. In the first quarter of 2017, prices rose approximately 6% compared to the last quarter of 2016. In the second quarter of 2017, prices increased another percentage point, quarter on quarter (q/q). We expect prices to increase close to 3% (q/q) in the third quarter. The increases in the first and third quarters will result in an annual inflation of 10% for 2017. This marks a clear reversal of the slowing inflation recorded in the last two years. 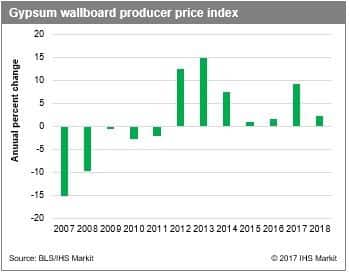 The largest producer of wallboard in the United States is USG, a publicly traded company that has a quarter of the market share. USG is also the largest manufacturer in Mexico and provides approximately 42% of the gypsum shipments in Canada. The company produces wallboard in 21 plants in North America and mines gypsum in 12 locations. Their capacity utilization for wallboard was 61% in 2016, lower than the estimated industry average of 75%. 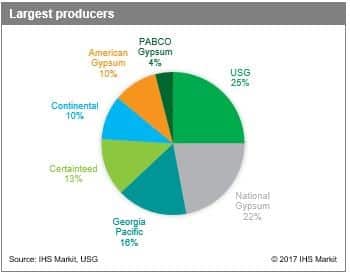 The second largest producer is National Gypsum, a privately held company with 17 wallboard plant locations in United States and Canada. Their market share closely follows USG at 23%. Georgia Pacific (subsidiary of privately-held Koch industries) is the third largest producer, followed by CertainTeed (Saint Gobain) with 13%. High concentration of producers has proved it difficult for customer negotiations in recent years. Typically, producers announce an annual increase in December. While they have been successful with these large increases in several years (2012Q1- 9.6% q/q, 2013Q1- 13.4 q/q and 2014Q1 10.9% q/q), in others such as 2015 and 2016 price increases in the first quarter were lower and typically reversed in the following quarters.

Bottom line: Although the first quarter price increase for wallboard was not as high as 2012 or 2013, we expect the announcement of higher prices this September due to increased demand from hurricane re-construction. Buyers may have difficulty pushing against these increases. After an annual increase of 10%, wallboard inflation is expected to slow down once again in 2018.