Price alert: Are lumber prices rising too fast? Think again with the OSB in sight

Historically volatile OSB prices are once again in an upward cycle.

The September producer price index (PPI) report from the Bureau of Labor Statistics shows oriented strand board (OSB) prices increasing 13.3% year over year. Although softwood lumber has been grabbing the headlines, OSB prices also had a streak of price increases in 2017.

Where is it used and who makes it?

Oriented strand board is a structural panel made up of thin wood strands that is used for sheathing in walls, flooring and roofing. Throughout the years, OSB has increased its market share within the North American structural panels industry. Last year, its share stood at 67% according to the Engineered Wood Association (APA). This transition to OSB was mainly because of the cheaper pricing relative to plywood, in addition to some structural characteristics. Similar to softwood, the largest end market for this commodity is the housing market. Norbord, one of the leading US producers of OSB, notes that in 2016, 55% of its OSB was used in new home construction, 20% in repair and remodeling, 20% in industrial uses and 5% was exported.

There are only handful of players in the North American OSB market and they have had a high capacity utilization rate. According to APA, the industry-wide capacity utilization was 88% in 2016 and this figure is only bound to increase in 2017. In fact, in its second quarter presentation Norbord reported a 99% operating capacity utilization rate. Despite the high rates, the company still has two curtailed mills, one in Alabama and one in Quebec. It plans to open the Alabama mill during the fourth quarter and achieve a normal run rate in the first quarter of 2018. It is watching market dynamics to determine the re-opening of the Quebec mill. 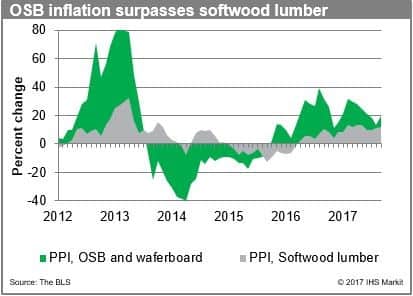 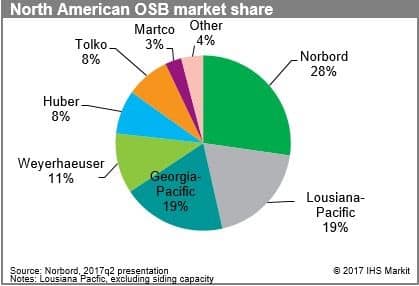 What's the driving this price increase?

Increasing capacity utilization rates points towards growing demand and supply in the market, yet this level of supply may not be enough. In 2016, OSB production increased approximately 7% according to APA. However, increasing supply has not kept pace with recovering demand from construction. Housing starts increased almost 10.6% in 2015, followed by another 6.3% in 2016. IHS Markit expects slower growth in 2017, just 1.4% before a stronger recovery of 9.2% in 2018. The lull in housing starts this year didn't take the pressure off of the OSB price, which have jumped 14% since the beginning of this year, indicative of supply tightness in the market and better margins for producers.

At IHS Markit, in addition to supply and demand, we carefully follow input costs, as they can be an important determinant for price changes. A closer look at the input cost categories show that although some components are posting price increases, they are nowhere near the OSB price escalation.

Bottom line: Price increases that far exceed cost increases point to a tight supply condition. The alternative to OSB does not provide a reprieve for builders. Softwood plywood, which is traditionally more expensive, has also registered a 12.7% price increase since January 2017. Although risks are to the upside due to higher housing construction demand, as more supply reaches the market, we expect OSB prices to moderate somewhat in 2018.

What are the prospects for vaccines and therapeutics? Register now to hear what expert Gustav Ando has to say about… https://t.co/PYbbaWdjPL

Have you started holiday shopping yet? We are predicting 5% year-over-year growth in holiday retail sales. Read mor… https://t.co/fLC1NylhLT

With many dreaming of their holidays now deferred, several key challenges will ensure that the recovery of the Euro… https://t.co/ELdlOWGOnW