Perforation inflow test is a type of a well test where the well is perforated underbalanced and is allowed to flow into a closed wellbore. The resulting pressure buildup is measured and analyzed. Provided reservoir dominated flow was reached during the test, the analysis provides initial reservoir pressure and an estimate of near wellbore permeability. The well can also be perforated overbalanced and the resulting falloff can be measured and analyzed.

An impulse derivative is calculated and plotted, which is used for flow regime identification. If radial flow was reached within the time constraints of the test, permeability, skin and initial reservoir pressure can be determined uniquely. If the data is transitioning to radial flow, reservoir characteristics cannot be determined uniquely. In this case, history matching can establish the minimum and maximum values of permeability, skin and initial reservoir pressure.

Example 1: Radial flow (identified by a horizontal trend on the pressure derivative) was not reached during the test. Unique estimates of permeability and reservoir pressure will not be possible.

Example 2: Radial flow was reached during the test. Permeability and reservoir pressure can be determined uniquely.

Tests should be designed so that radial flow occurs as quickly as possible. The following variables affect the time to reach radial flow:

In low permeability formations, the time to reach reservoir dominated flow (i.e. radial flow) can be impractical. This is especially the case in the presence of positive skin and poor communication with the reservoir. With a mini-frac, we are ‘seeing’ past the damaged near wellbore region and radial flow develops quicker in most cases. However, depending on the volume of fluid injected, mini-frac tests do not always achieve test objectives. Depending on the size of the fracture created, radial flow may not be reached within the time constraints of the test.

If a supercharged pressure region exists around the wellbore as a result of drilling overbalanced, PITA can point to an artificially high pressure. Mini-frac is more likely to ‘see’ past the supercharged region and provide a representative reservoir pressure.

Choosing between PITA and Mini-Frac

Example 3: Shale Gas (Montney, k ≈ 100 nD). PITA was completed on a vertical Montney gas producer to obtain an initial reservoir pressure and permeability. A bridge plug was set below the perforations to reduce the wellbore volume. The Montney formation was perforated under a full water column. Following the perforations, a packer assembly, including a plug and pressure recorders in the tailpipe, was set above the perforations.

The test was cut short by a leaking bridge plug. However, because a bridge plug was set below and above the perforations, pressure data was transitioning out of wellbore storage and into radial flow. Two models were generated to determine the range of initial reservoir pressure and permeability. 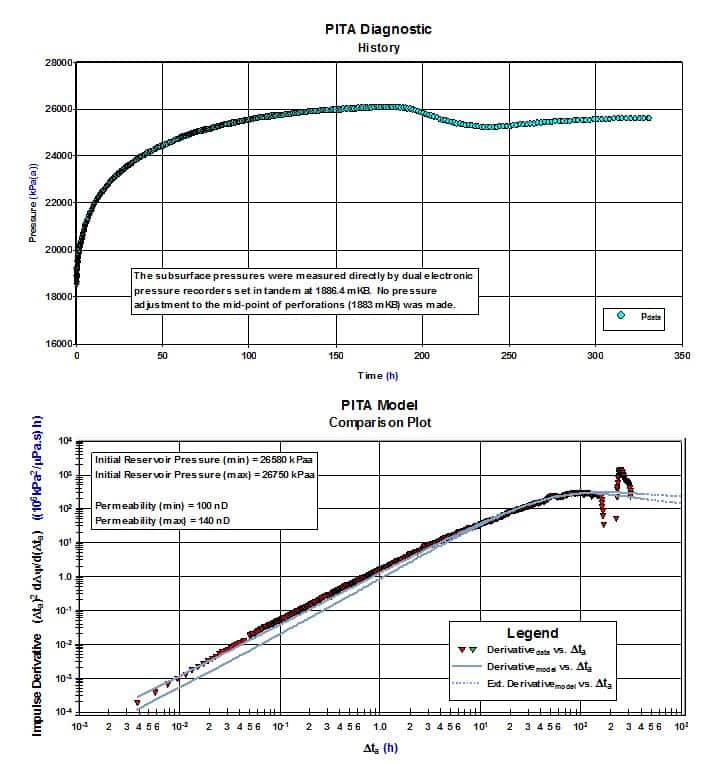 PITA is suitable for tight formations as a means to determine initial reservoir pressure and permeability in vertical wells. It is recommended for formation permeability over 100 µD. It can be successfully carried out in lower permeability formations, although measures should be taken to significantly reduce the wellbore volume.