Investors and operators continue to seek new liquids production sources, although with relatively low levels of activity given current dedication to the Permian, Eagle Ford and Bakken. One such emerging source has been producing for many decades: the Powder River Basin (PRB) in Wyoming. Recent PRB activity mimics the rebirth of the Permian Basin in Texas as operators continue improvements in drilling, completion efficiency and well performance, which has led operators to turn their attention to the PRB's unconventional stacked-pay opportunity, but on a relatively small scale (essentially portions of Converse and Campbell Counties, Wyoming). Of particular interest is Chesapeake Energy, long heralded as "America's Gas Company", which has been undergoing a transformation to a major liquids producer. Chesapeake's recent activity has been oil focused- from acquiring WildHorse Energy in the liquids-rich Eagle Ford to divesting its gassy Utica position, Chesapeake now is looking to leverage the stacked formations in the PRB to provide critical liquids volumes to its portfolio. Chesapeake's core Powder River activity is in a hot spot found in the southern region of Converse county in Wyoming. To showcase potential investment and production outcome variability, IHS Markit leveraged the Vantage NA platform to create three activity scenarios for Chesapeake's PRB asset through 2023, with net oil production ranging from 52,000 boe/d to 140,000 boe/d, indicating the early development stage of the asset. 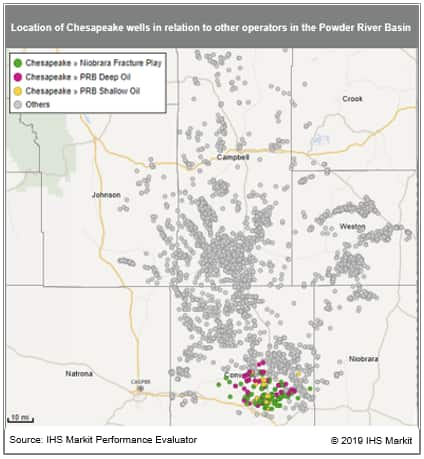 Figure 1: Location of Chesapeake wells in relation to other operators in the Powder River Basin

Chesapeake's early PRB development was in the Niobrara formation, but due to its well performance and oil price collapse of 2014, Chesapeake ceased Niobrara development. Today in the Niobrara, Chesapeake has run several tests using different proppant concentrations, spacing, and lateral lengths, and has seen an improvement in performance as it works on finding the optimal completion recipe. Additionally, Chesapeake has been active in the Sussex formation, developing it with lateral lengths ranging from 1 to 2 miles, and recent proppant intensity ranging from 900 lb/ft to 1,200 lb/ft.

The Turner formation, however, represents the driver of the recent Chesapeake PRB resurgence. The company appraised the Turner during 2018 with spacing tests and so far, 1,980 foot spacing is optimal. Chesapeake has also been drilling longer laterals that range from 1.5 to 2 miles, with proppant intensity ranging from 500 lb/ft to 2,000 lb/ft. Through these tests, Chesapeake is working towards finding the optimum parameters that yield the best Turner performance as it moves on to the development stage.

Given the stacked nature of the PRB, Chesapeake has also set its sights on developing the Parkman formation in the future. Parkman results from other operators such as EOG Resources, Devon Energy, and Ballard Petroleum have been encouraging, though Chesapeake Parkman performance is an unknown. Through the implementation of similar completion and spacing tests as Chesapeake has done for the Turner and Niobrara, the Parkman provides an opportunity for potential upside, as do the rest of the formations that are left to be developed in the Powder River Basin.

Chesapeake intends to leverage the stacked potential of the PRB in the short term in order to provide long-term production and reserves. Historically, the company primarily focused on testing the Niobrara and Sussex formations. However, since 2018, Chesapeake's high Turner productivity and repeatable performance brought the formation into prominence in the company's plans. In Chesapeake's 4Q:2018 earnings call, the company indicated it would continue developing the Turner with up to 5 rigs and would possibly allocate a single rig to Niobrara appraisal efforts. The IHS Markit assessment of Chesapeake's PRB asset utilized historical data and operator rig guidance, including continued appraisal of the Niobrara formation in 2019. IHS Markit evaluated three activity levels utilizing constant estimated well costs and type curves, with type curves based on wells drilled from 2016 through 2018 with laterals ranging from 1.5 - 2 miles, as Chesapeake is moving towards drilling longer laterals. The IHS Markit activity scenarios and resulting production outputs are defined as follows: 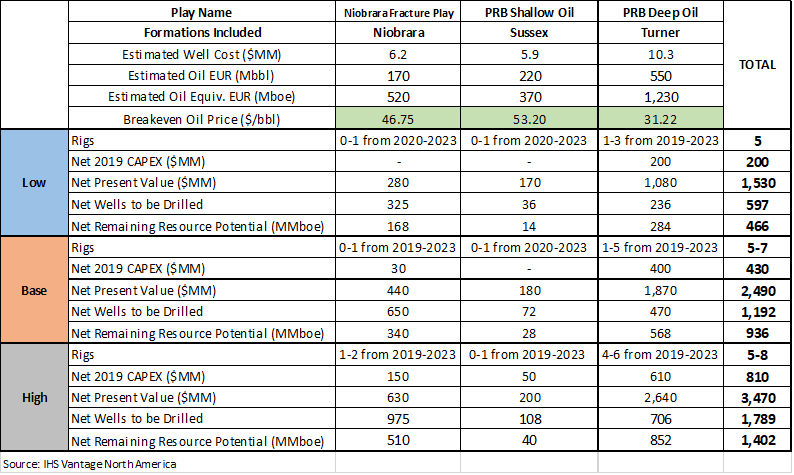 The Sussex break-even (assuming 10% IRR) being close to the assumed forward price for oil of $60/bbl WTI makes investing in activity for that formation only add volumes, but not appreciable value, which is likely why Chesapeake has shifted focus away from that formation. While better, Chesapeake's economics in the Niobrara formation (estimate break-even of $47/bbl WTI) do not compete with the Turner, which achieves PRB-leading breakevens of $31/bbl. Though the Turner has better economics, Chesapeake's Turner inventory is less than that of the Niobrara formation. Chesapeake's 2019 results will play a critical role in how the company will need to manage activity between the two opportunities in a manner to maximize both oil growth and cash flows against a changing commodity price in the long term. 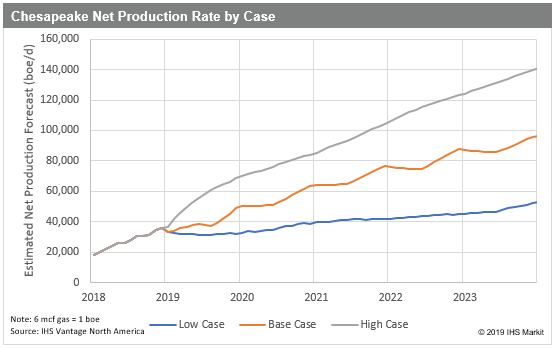 The Turner formation has sparked a re-emergence of the Chesapeake PRB asset. In each case the Turner features prominently, accounting for over 70% of the total asset NPV. The story does not stop there as Turner economics allow for delineation of potential upside from additional zones in the long term—such as the Parkman, Mowry, and Teapot—and as it continues to seek the optimal well spacing, drilling, and completion techniques needed to unlock the full potential of the many formations that lie within the Powder River Basin.

Learn more about the solutions we used in this analysis—IHS Markit Performance Evaluator and IHS Markit Vantage.

Paola Romero is a senior research analyst on our plays and basins team.