Polyolefins: Impact of trade war on the world’s most common plastics

Because of the escalating trade tensions between the US and China, the Chinese government has imposed a series of reciprocal tariff hikes on US-produced polyolefins imported into China, including polyethylene (PE) and polypropylene (PP). Because PE and PP constitute the world’s most common plastics by volume, and China represents the world’s largest market for polyolefins, these tariffs are significant.

Exports of PP from the US to China were small, creating no significant impact. However, these tariffs were particularly problematic for US PE producers because they coincided with the launch and ramp up of several new world-scale PE plants based in the United States. These new plants, which mostly produce HDPE and LLDPE, are based on cost-advantaged ethane gas. They presumably had been justified and built with the expectation that a significant portion of their production would be exported to China.

China accounts for approximately one half of the annual global growth for these materials. Technically US PE producers have maintained enough of a production cost advantage to still profitably ship these products to China. Yet the imposed tariffs would certainly slash margins on these sales, motivating US producers to seek alternative markets with higher margins.

Trade tensions between the US and China have thus far remained unresolved. As a result, China imposed a new round of reciprocal tariffs effective September 1. These tariffs include an additional 5% on US HDPE and LLDPE products, effectively raising the tariff on these resins to 36.5%. In addition, LDPE resins, which were previously excluded from the incremental tariffs, were made subject to an additional 10% tariff effective December 15. The new tariff on LDPE resins raises the total tariff to 16.5%. The addition of LDPE to the tariffed categories is significant, as two new worldscale LDPE plants in the US are scheduled to launch by year end.

Despite the prevailing trade tensions, US PE exports have been rising, largely due to the startup of new production capacity (see Figure 1). IHS Markit anticipates the launch of nearly 2.9 million metric tons of new PE production capacity in the US during 2019. While much of this new capacity has yet to start, US producers have recently recorded four record-volume months relative to PE exports. In 2017, US producers exported 39% of their production. By comparison, we estimate that US producers will export approximately 50% of their 2019 production.

Although US PE exports are increasing in volume, US producers are facing unprecedented challenges with respect to optimizing margin returns associated with these exports. With tariff rates approaching 40% and competition from global producers unaffected by trade war tariffs, US polyolefin producers are seeking alternative higher-netback markets outside of China. The drive to optimize export netbacks has resulted in a shift in global trade patterns. The table reflects the shift in US PE trade flow and volume since 2018 as well as the monthly US PE trade volumes shipped to various regions. It is based on government data obtained from the IHS Global Trade Atlas.

US PE producers have responded to the tariffs by redirecting exports originally destined for China to Europe and other countries in northeast Asia, such as Taiwan and South Korea. This strategy reduced US PE exports to China by 42% through June of this year, while US exports to Europe nearly doubled versus the same period last year. To fill the gap left by US producers exiting China, Middle East PE producers are reducing export volumes to Europe and increasing volumes to China. 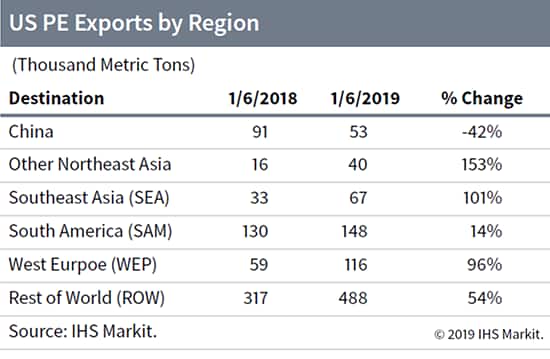 The US-China trade war has not only affected trade flows and target markets. It also has had a negative effect on demand and producer margins. While it is difficult to calculate the precise effect of the trade war on polyolefin demand, we know that polyolefin demand has always been closely linked to GDP. As such, any decline in GDP negatively impacts polyolefin demand. IHS Markit economists have indicated that the trade war will likely account for a .2% to .3% reduction in global GDP in 2019. Therefore we should expect a corresponding decline in polyolefin demand. IHS Markit analysts operating in China report that resin buyers in China have been wary of potential demand and price declines since the tariffs were imposed. They have therefore limited purchases to “must-have” volumes.

The disruption of trade flows and the rebalancing of global PE trade due to the trade war also negatively affects producer margins. US PE producers who have been incentivized to move export volumes to alternative markets outside of China have assumed the role of “price maker” rather than “price taker.” This shift in persona became necessary when US producers, who were effectively blocked from accessing the China market, were required to carve out and expand market share in alternative markets.

IHS Markit analysis suggests that integrated PE margins for US producers have been trimmed by as much as $200 per ton as a direct result of the trade war. The aggressive price posture taken by US producers looking to establish or expand market share in smaller markets has had a cascading effect. The resulting margin erosion would likely not have occurred had US producers continued to have unfettered access to the China market, given that it is sufficiently large to accommodate the expanded level of exports that would have otherwise come from the US. In addition, global supply and demand balances for 2019 for PE did not indicate a significant over-supply condition prior to the trade war.

Barring a near-term resolution to the trade war and a subsequent recovery of the global economy, we can expect continued pressure on PE demand, prices, and integrated margins.