The mitigation of country risk using political risk insurance (PRI) has long been undervalued by foreign direct investors but may prove critical if governments are to mobilize financing in support of their recoveries from the coronavirus disease 2019 (COVID-19) pandemic. While the market intuitively understands the benefits of PRI, it is often perceived as an "expensive" cost for a project, because the upside financial benefits of coverage have not been adequately quantified in the valuation process. This has limited the broader use of PRI as a tool for mitigating the operational risks most often associated with emerging and frontier markets.

We have found, though, that using nuanced Country Risk Premiums (CRP) to evaluate the potential benefits of PRI coverage in emerging markets and developing economies (EMDEs) provides a different picture. A "bottom-up" approach to financial valuation demonstrates that PRI typically reduces the CRP and credit score equivalent of an emerging market investment. The internal rate of return (IRR) is improved because PRI provides compensation for potential financial losses caused by country risk.

Pandemic premiums from the bottom-up

EMDEs have faced both strained fiscal budgets and a deterioration in sovereign credit quality. "Top-down", one-size-fits-all metrics (such as sovereign bond spreads, or credit default swap spreads) that are widely used for valuation purposes may constrain governments' ability to mobilize financing for development projects in support of their post-pandemic recoveries. By contrast, a "bottom-up" quantitative evaluation of the risk factors affecting a given project, broken down by the characteristics of specific commercial sectors, adds up to a more accurate CRP estimation. The bottom-up approach is typically more precise and sensitive to industrial sector, capital intensity, and other project-specific attributes.

Taking one typical metric used to calculate a CRP, in this case, the sovereign bond spread suggests that the top-down approach tends to overestimate the risk. During the first quarter of 2022, the sovereign bond spreads for Angola, Ecuador, Ghana, and Sri Lanka widened, yet the bottom-up estimation of the CRP indicated that the risks to projects in these countries were far lower. 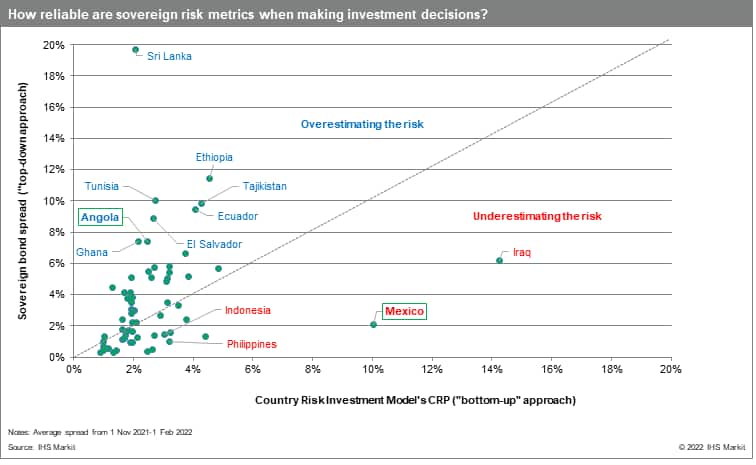 A top-down approach to estimating CRPs may also result in the underestimation of risk, given that operational risks to projects are not necessarily correlated with macro-financial metrics. The alteration or cancellation of a project by the host government can result in significant costs over the lifecycle of a project that might be difficult to recover, and these risks can be acute in countries that otherwise have favorable macro-financial profiles, like Mexico.

Over-estimating the risk in Angola

The estimated CRP for Angola implied by the country's sovereign bond spread is just over 4.0 percentage points greater than the CRP calculated by the CRIM. The overestimation of risk stems from a failure to capture the clarity offered by policy and regulatory frameworks in several key sectors. However, the bottom-up approach has accounted for the steady reduction in cash flow losses related to the declining risk of state contract alteration, particularly as the Angolan authorities began to reform state-owned enterprises from mid-2022. More important still, the bottom-up estimation of risk premia varies depending on the specific characteristics of a project in each commercial sector.

The CRP estimated for telecommunications projects in Angola has noticeably improved, after the government began improving transparency in the awarding of licenses. Telecoms also benefited from a rapid recovery in demand for goods and services, as reflected by the large USD5.45 million reduction in estimated losses to net present value from the first quarter of 2021 to the first quarter of 2022.

The impact of PRI

A bottom-up approach presents the possibility for a new type of project valuation: contrasting a project's NPV and the CRP embedded in the discount rate used before and after applying PRI. IHS Markit has disaggregated the relevant risk events covered by PRI from their CRP estimate and focused on the impact of a well-crafted PRI policy on the CRP in a valuation exercise. We then selected a single, representative energy project for three countries with different top-down CRPs. This premium was calculated in the conventional way, by converting the sovereign risk equivalent to a bond default spread and adjusting that spread for the relative volatility of equities to bonds. After assuming the project had obtained a full package of political risk coverage in the CRIM, our model indicated that there were clear reductions in the top-down CRP, and the project's IRR was improved because PRI provided compensation for the potential financial losses caused by country risk.

PRI has measurable positive financial impacts, by mitigating certain components of the CRP, which in turn decreases the discount rate used for valuing project cash flows. A lower discount rate then can feed directly into improving the NPV of the project, depending on project location and specifics. By tempering the impact of political risk events on the future cash flows of the insured project, volatility and country risk can be measurably improved. A bottom-up approach to financial valuation, combined with PRI, should therefore enable companies to justify investing in one or more projects with a CRP that might otherwise fall outside their traditional risk tolerances.

We used our Country Risk Investment Model (CRIM) to generate nuanced Country Risk Premiums (CRP) to evaluate the potential benefits of PRI coverage in emerging markets and developing economies (EMDEs). You can read the full white paper, written in collaboration with Marsh.