The pace of global economic growth eased to its weakest for three years in May amid an increasingly broad-based slowdown. Business sentiment about the year ahead meanwhile slipped to its lowest since comparable data were first available seven years ago.

A major change in May was a weakened rate of expansion in the US, which joined the other major developed economies of the eurozone, UK and Japan in the slow lane to push developed world growth to its lowest since 2012. Emerging market growth also eased, reflecting a renewed downturn in Brazil and softer expansions in China and Russia.

At 51.2 in May compared to 52.1 in April, the JPMorgan Global PMI™, compiled by IHS Markit, fell for a second successive month to signal the slowest expansion of global output since June 2016.

While the PMI had hinted at a modest pick-up in the pace of global economic growth in February and March, the data for the second quarter are looking decidedly gloomy, pointing to the weakest rate of expansion since the third quarter of 2016. The survey data are indicative of worldwide GDP rising at an annual pace of 2.0% (at market prices) so far in the second quarter, down from 2.4% in the first quarter, though momentum was lost to around 1.75% in May alone. 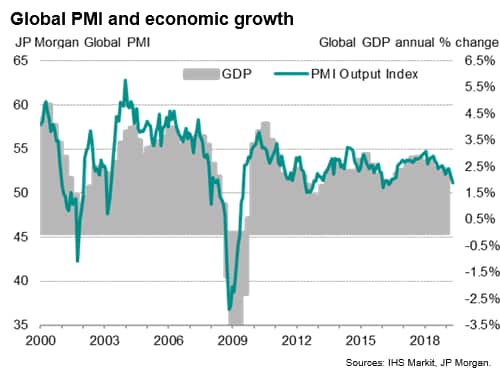 Manufacturing again led the slowdown, with output growth almost grinding to a halt to register the sector's worst performance since October 2012. Falling global goods exports, down for a ninth successive month in May, fueled the factory malaise.

However, the May PMI surveys also brought signs of the slowdown spreading further into the service sector, where the monthly expansion of business activity was the smallest since August 2016. A further loss of momentum is signalled for coming months via weaker new order inflows, falling backlogs of work and a drop in business expectations.

Inflows of new work showed the smallest rise for three years, falling in manufacturing and growing at their slowest pace since mid-2016 in services.

In a sign of excess capacity developing, backlogs of uncompleted work fell for a second consecutive month, dropping at the steepest rate for three years amid falls in both the manufacturing and service sectors.

Companies' expectations of their own output in a year's time meanwhile fell to the lowest since data on the outlook were first collected in mid-2012. This is the only subjective question asked in the PMI surveys - all others being based on month-to-month comparisons of actual business metrics - and highlights the extent to which business sentiment has fallen alongside slower growth of output and order books. Sentiment weakened in both manufacturing and services during the month, the former remaining especially gloomy.

Analysis of the anecdotal evidence accompanying the PMI survey responses revealed a marked spike in concerns over global trade wars in May, as well as growing worries about broader economic growth prospects, encouraging a shift to risk aversion. 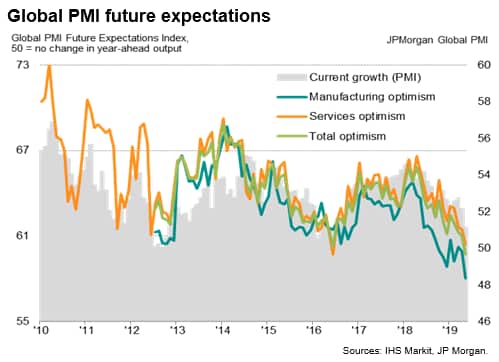 Sluggish sales and gloomier outlooks were commonly cited as causes of a growing reticence to hire staff in May. Measured overall, global employment rose at the joint-slowest rate seen over the past two years, showing some resilience in services but dropping in manufacturing (albeit only marginally) for the first time since August 2016.

Rising risk aversion was meanwhile also reflected in a further sharp drop in demand for investment goods such as plant and machinery. New orders for such goods fell in May to one of the greatest extents seen since 2012, having now declined for five consecutive months in a sign of reduced business investment. 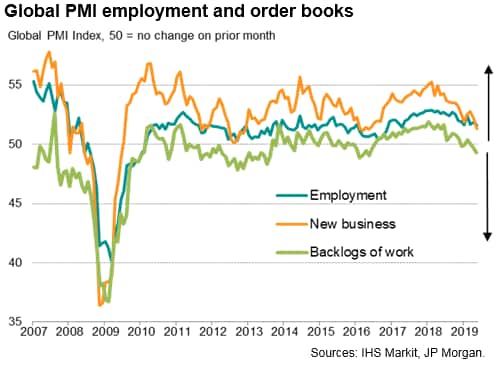 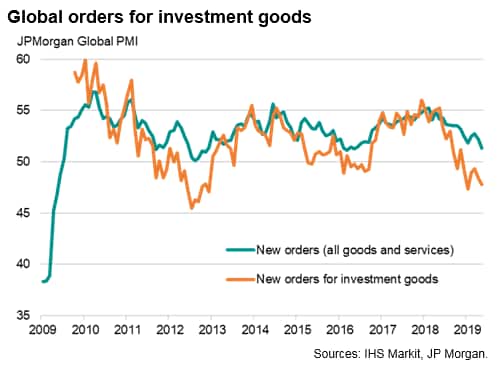 Average selling prices for goods and services rose globally to the smallest extent since September 2016, rising only modestly to contrast markedly with the solid rates of increase seen earlier in the year. Input cost inflation also slipped further from last year's high, easing to the lowest since September 2016. 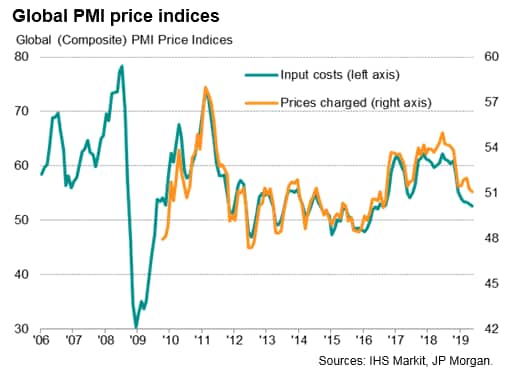 Growth in the developed world slipped to the lowest since December 2012, with manufacturing output in decline for a third straight month and services reporting the worst expansion since August 2016. Among the largest advanced economies, the biggest change was seen in the US, where growth faded to a three-year low, dropping close to stalling in both manufacturing and services. The slowdown brought the US into line with weak rates of expansion again seen in the UK and Japan. UK growth remained close to stagnation despite an improvement in the service sector, with companies reporting widespread worries over Brexit. In Japan, manufacturing dragged on the economy again, with goods production falling for a fifth straight month, though the service sector also remained lackluster.

The Eurozone was consequently the only major advanced economy to see growth accelerate in May, but the improvement was only modest and rounded off a disappointing month for all four of the largest developed economies. 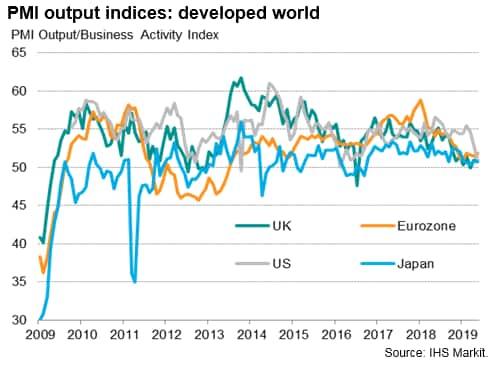 In the emerging markets, growth was the joint-weakest since September 2016, sliding closer to stagnation in manufacturing and slowing markedly in services.

Looking at the four largest emerging markets, the worst performance was seen in Brazil, where output fell back into decline for the first time since September of last year with a deepening service sector downturn. Growth meanwhile slowed in both China and Russia. While the rate of expansion in China fell to a three-month low, the rise in output in Russia was the weakest for three years. Both saw a near-stalling of manufacturing output and weaker services growth.

Only India avoided a worsening performance among the major emerging markets, but even here the rate of expansion merely held steady on April's seven-month low. Faster manufacturing growth offset a near-stagnation in India's service sector - its smallest expansion for a year and hinting at weaker domestic demand. 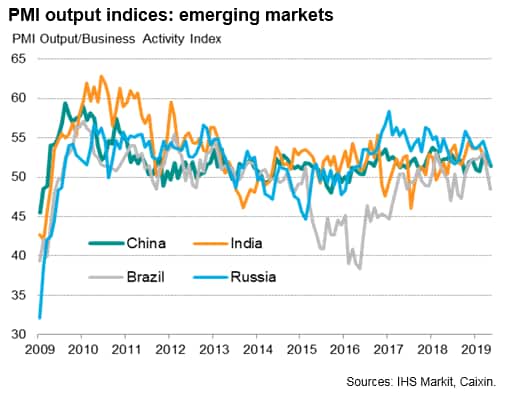