Fears over a sharp slowing in economic growth on the Chinese mainland eased as the latest Caixin service sector PMI rebounded midway through the fourth quarter. The upturn helped offset the subdued manufacturing sector, which has stalled amid ongoing trade frictions.

The survey nonetheless indicates that the underlying rate of growth has cooled again in the fourth quarter, with business confidence about the year ahead also deteriorating as trade war worries exacerbated growing concerns over the weakening demand environment. 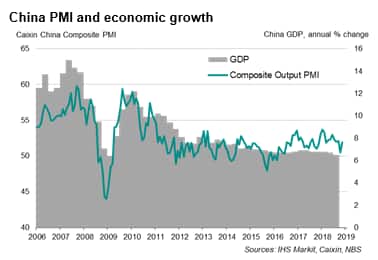 Faster economic growth was signalled in November after the Caixin China Composite PMI™ Output Index (which covers both manufacturing and services) rose from 50.5 in October to 51.9. The rise was the biggest gain (in terms of index points) for over two years, though still failed to regain the ground lost in October, which had seen the index fall to a 28-month low. As such, the average PMI reading for the latest two months puts the fourth quarter on course for the weakest expansion since the second quarter of 2016.

Service sector growth accelerated to the fastest since June, buoyed by an improvement in domestic demand and steady services export growth. 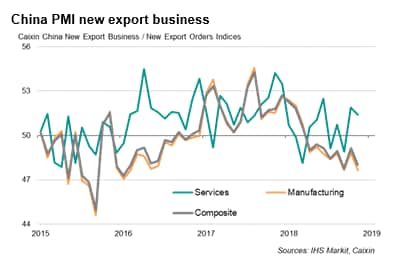 In contrast, manufacturing output stagnated in November amid tepid demand conditions, failing to grow for the first time since June 2016.

Rising trade tensions continued to be a source of consternation in the factory sector, reportedly weighing on foreign demand for Chinese manufactured products. New export orders for goods fell at an increased rate, but improved demand from domestic customers helped push overall factory order book growth up to the highest since July.

Despite service sector exports rising solidly, the newly-launched composite new export business index covering both manufacturing and services fell for an eighth consecutive month, as the decline in goods exports overwhelming the gain in exports of services.

Forward-looking indicators urge caution in interpreting November's upturn as the start of a stronger growth phase, suggesting the soft-patch has further to run, though much will of course depend on the developing trade picture. Business expectations about the year ahead deteriorated to the joint-lowest since comparable data were first available in 2012. Optimism was especially weak again in manufacturing, albeit lifting from October's low, mainly reflecting trade war and tariff concerns. However, service sector optimism slipped to the third-lowest recorded since data were first collected in 2005. 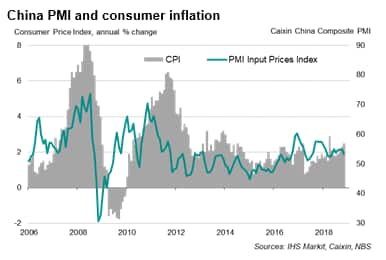