IHS Markit's PMI surveys indicated a strengthening of global economic growth in August, with a broadening out of the recovery by sector evident. Some important sectors such as autos, real estate, and households goods are now among the top performers as the easing of lockdowns from the height of the pandemic continues to benefit key parts of the global economy such as factories, housing markets, construction and high streets. However, many sectors remain in decline due to ongoing social distancing measures, and some waning of performance was also recorded in many sectors in August, casting a shadow over the near-term outlook.

Output rose in 20 of the 26 manufacturing and service sub-sectors covered by the PMIs during August, the highest number since March of last year, indicating a broadening out of the economic recovery. 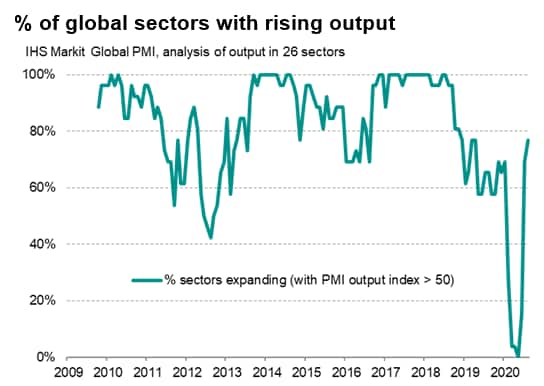 All manufacturing sectors reported growth, but the picture was more mixed in services, which consequently lagged manufacturing in terms of overall performance in August. Often these underperformances were linked to ongoing measures intended to fight the spread of the COVID-19 virus. 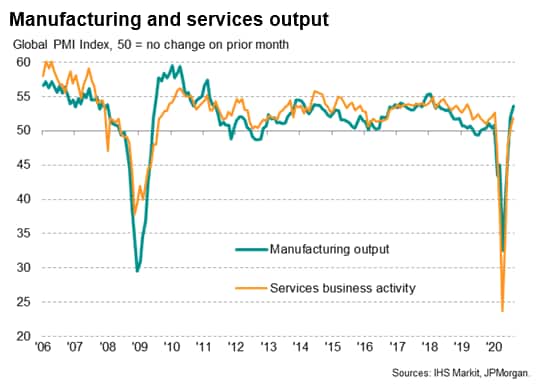 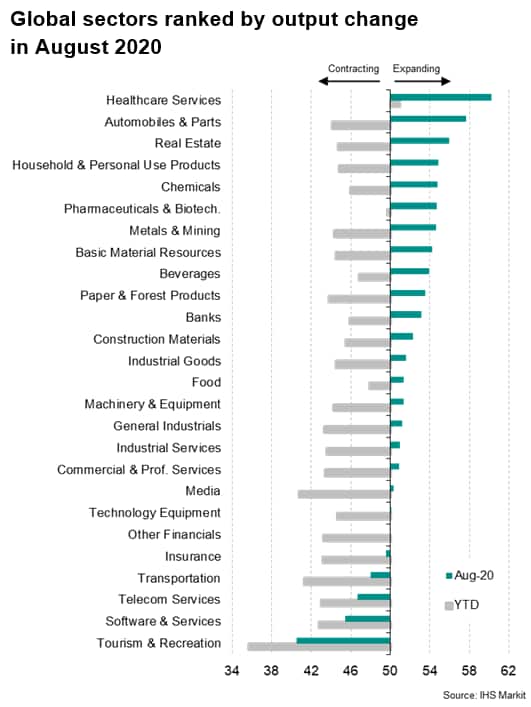 The upturn was led by healthcare service providers, which reported the strongest expansion in the detailed sector PMI 10-year history to push auto & parts manufacturing into second place.

As the world fights its worst pandemic in modern history, the outperformance of healthcare - both in August and the year to date - is self-explanatory.

Similarly, the steepest decline in August, and in the year-to-date has not surprisingly been seen in the tourism and recreation sector, which has suffered its steepest ever collapse during the pandemic.

However, it's the changing performance of some of the other hardest hit industries that is particularly interesting and encouraging.

The revived strong autos performance is linked to the world's car factories reopening en masse, and demand for cars reportedly increasing strongly, in part reflecting a shift away from public transport. The August increase in auto sector output was the largest recorded globally since February 2011.

Real estate has also started to perform especially strongly, partly in a sign of improving housing demand, with activity surging in August at a rate not seen for almost three years. 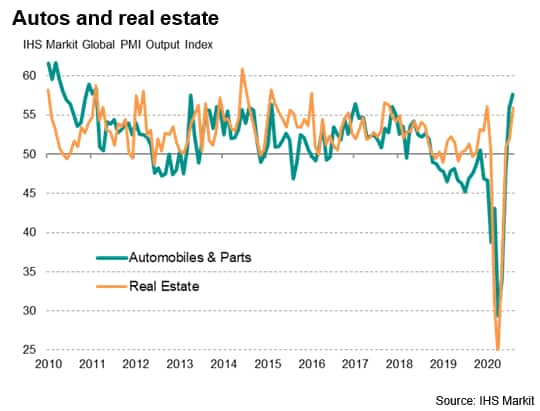 Household goods producers have meanwhile likewise fared especially well for a second successive month, growing at the sharpest rate for two-and-a-half years in August, buoyed by increased retail demand for items such as clothing as high streets continued to see rising footfall.

The relative strength of sectors such as autos, real estate and household goods contrasts markedly with the height of the global pandemic. Between March and May, the PMI output rankings saw all 26 sectors in decline on average, with the best performances limited to healthcare services, food manufacturing, pharmaceuticals and tech equipment - sectors that benefitted from lockdowns. 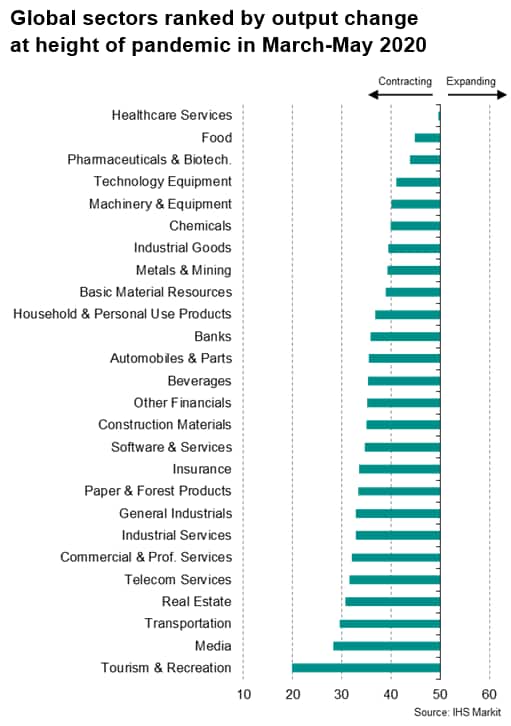 Media and transportation, two other sectors that suffered the most in terms of falling output during the height of the pandemic, are also seeing improving trends. Although transportation remained in decline in August, the sector has seen business levels close to stabilising in the past two months as passenger numbers and trade have picked up. Media has now seen business levels recover modestly for two months after widespread closures.

Two other sectors that we monitor closely are machinery & equipment and construction material production, as these are useful bellwether of capital expenditures, with the former a particularly good indicator of business investment. Encouragingly, August saw output of machinery and equipment rise for the first time since November 2018, while construction material production has risen over the past two months to a degree not seen for two years. 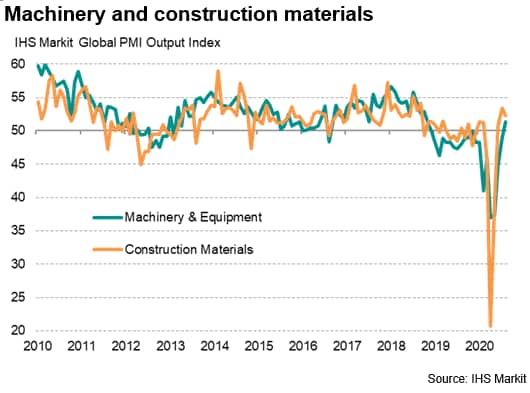 The revival of employment growth remains less widespread, however, with only three sectors - healthcare services, real estate and pharmaceuticals - reporting robust job gains in August, albeit with non-banking financial firms, commercial and professional service providers, industrial service providers, chemical and auto makers all also reporting modest or marginal job gains. At eight out of 26, the number of sectors with rising employment was consequently the highest since February, and up from none in May.

Tourism and recreation firms continued to report the steepest job losses, and have suffered by far the deepest cull to jobs so far this year.

While employment fell marginally when measured across all sectors globally in August, the decline was the smallest recorded since jobs began falling back in February in a sign that the overall labour market has started to stabilise. A marginal rise in service sector jobs was offset by a continued, albeit moderating, decline in factory jobs. 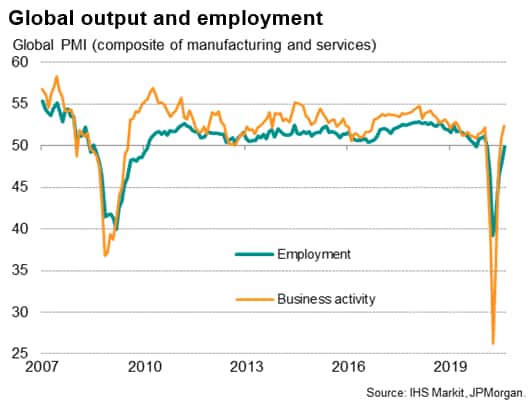 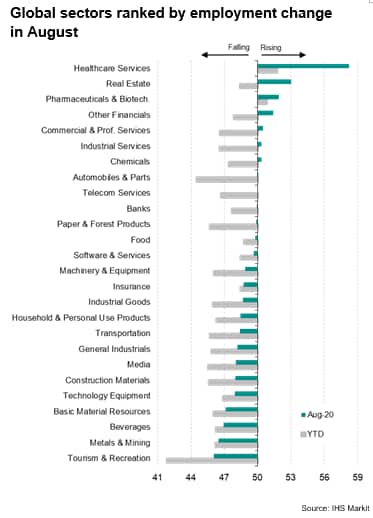 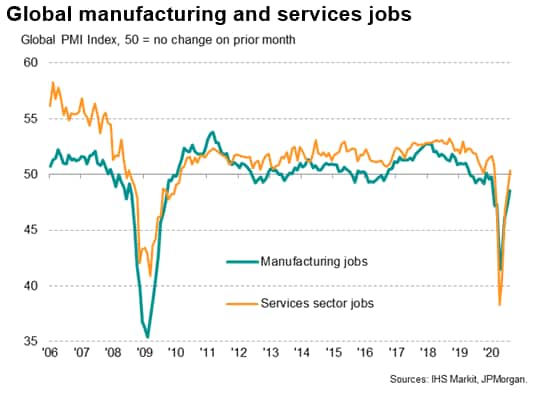 Fall in number of sectors with rising PMIs 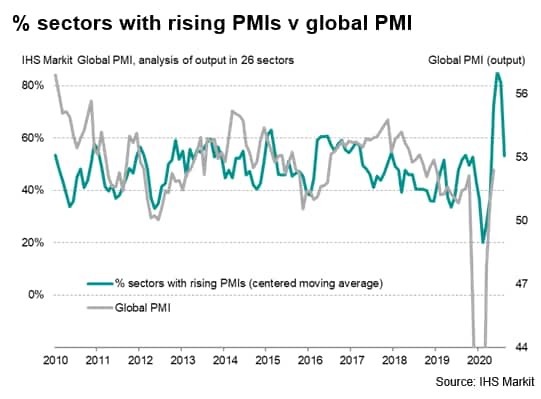 While some of these weaker PMI readings in part reflect a natural cooling after strong rebounds from lockdowns, some sectors brought more disconcerting news. In particular, the biggest deterioration in the output index between July and August was recorded in the tourism and recreation industry, where the rate of contraction accelerated worryingly again, having eased in the prior three months. Transportation saw a similar cooling. These deteriorations in part reflected resurgent virus cases and associated travel restrictions, highlighting the degree to which many businesses - and the global economy - remain vulnerable to further waves of virus infections. 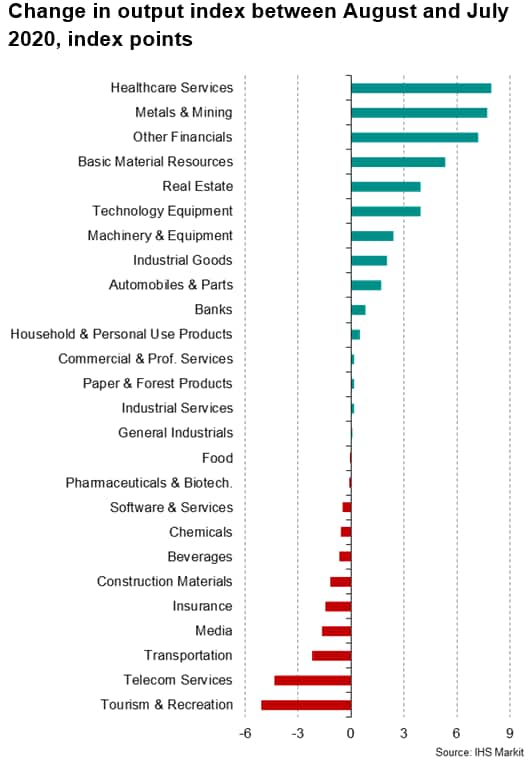 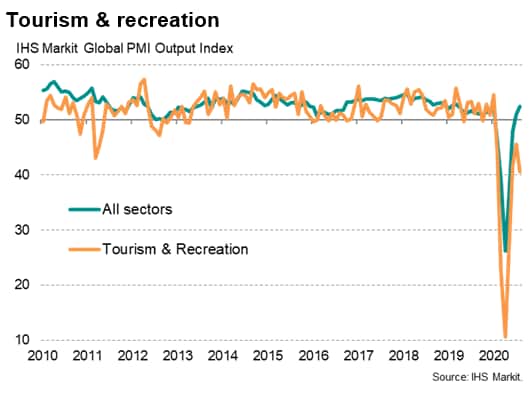