Indonesia’s manufacturing economy lurched back into life midway through the first quarter, with PMI surveys showing the strongest rate of growth since the summer of 2016. 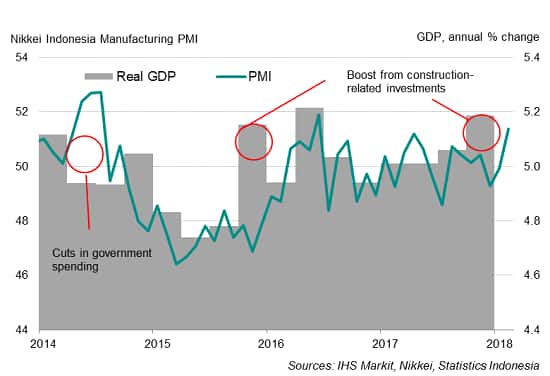 The headline Nikkei Indonesia Manufacturing PMI™, compiled by IHS Markit, rose from 49.9 in January to a 20-month high of 51.4 in February. Although signalling only a modest expansion, the improvement raises the prospect of the manufacturing sector making a solid contribution to economic growth in the first quarter.

The latest reading sets the factory sector on course for a quarterly gain, with the average PMI so far in the first quarter at 50.6, an improvement over the broad stagnation seen in the past two quarters. The survey data are consistent with the Indonesian economy growing at an annual rate of just over 5% in February. IHS Markit projects economic growth for 2018 at 5.2%, up from 5.1% last year.

The February PMI survey saw manufacturing output grow at its fastest rate since June 2016, buoyed in particular by improved domestic demand. Export sales fell for a third month in a row.

The PMI survey also showed a welcome upturn in employment. Staffing numbers rose for the first time in nearly one-and-a-half years in February. However, the outlook for factory jobs remained mixed amid ongoing signs of spare capacity. Backlogs of uncompleted orders continued to fall at a steady pace, suggesting higher inflows of new orders will be needed to sustain stronger employment growth.

Indonesian manufacturers are meanwhile increasingly fighting higher input costs. Limited growth of selling prices suggests that, so far, companies have struggled to pass the increased costs on to customers, which puts pressure on profit margins.

Modest increases in the PMI’s gauge of output prices, which exhibits a 73% correlation with the consumer price index, suggests that consumer inflation could remain stable for the time being, though the uplift in costs – if sustained – will likely pass through to consumers eventually. 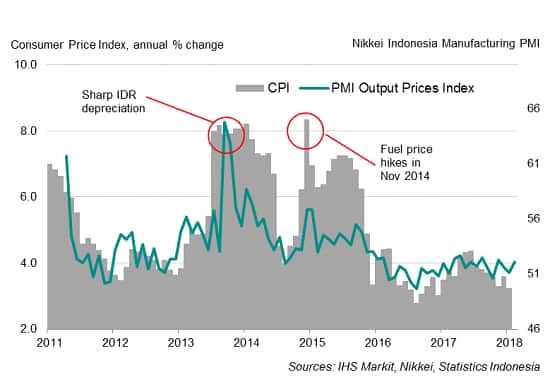 The combination of an improving manufacturing sector and rising cost pressures could add to expectations that Bank Indonesia will normalise monetary policy after undertaking aggressive easing last year.

Furthermore, inflationary pressures could build up rapidly, given the possibility of increased public infrastructure spending, election-related expenditure, rising oil prices and an expected further depreciation of the Indonesian rupiah.

The narrowing gap between US and Indonesian interest rates will also add pressure for the central bank to act. As such, IHS Markit expects the next move to be a rate hike in late 2018. 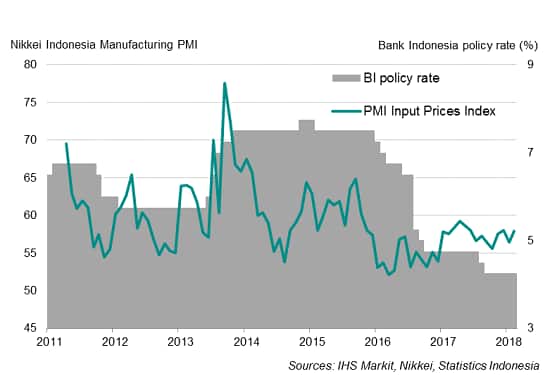