Japanese economic growth remained robust in February despite losing a bit of momentum, putting the economy on course for a ninth straight quarterly expansion.

The Nikkei Japan Composite PMI™ Output Index slipped from 52.8 in January to 52.2 in February, but still signalled another firm improvement in the health of the private sector. The readings so far this year are historically consistent with the economy expanding at a quarterly rate of around 0.5–0.6%. 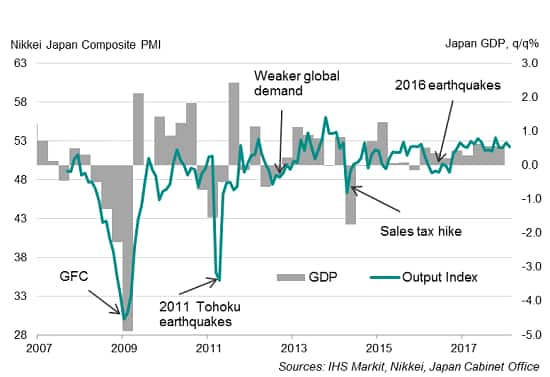 While the upturn was generally broad-based, it was the manufacturing sector that has driven much of the growth in recent months, including February. Although dipping, the latest manufacturing PMI reading remained among the highest seen in the past four years, with survey data indicating that rising domestic and external demand helped contribute to the upturn. Meanwhile, services activity continued to show steady growth. 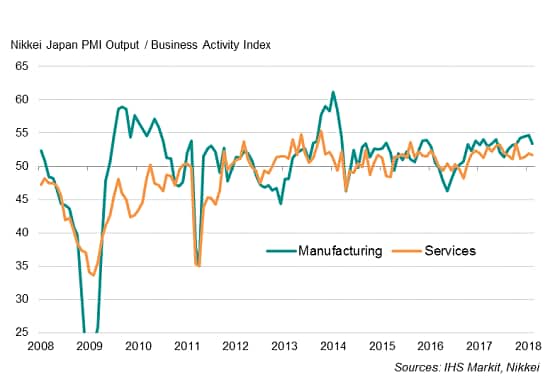 The labour market is clearly tight, and looks set to be squeezed further. The official unemployment rate is running close to a 24-year low, while job vacancies are the highest on record. With capacity constraints continuing to be reported, as signalled by a further rise in backlogs of work, hiring demand is unlikely to ease in the months ahead. 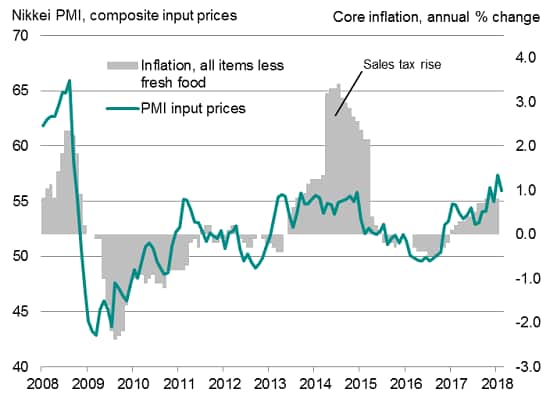 Strong cost increases prompted companies to raise selling prices to protect margins, albeit to a lesser extent than January, which hinted at downward pressure on overall profits. However, the stronger yen could help contain some of the rise in imported inflation in coming months.

Looking at the survey sub-indices, further growth is signalled for coming months. New order growth remained firm, while business expectations for the year ahead stayed positive.

Robust economic growth will add to expectations that the central bank could soon start to adopt a more hawkish tone, but core inflation has remained subdued and below the Bank of Japan’s target, highlighting the challenge faced by policymakers trying to revive price pressures. BOJ governor Kuroda recently said there’s no need to conduct another comprehensive assessment as to why the central bank failed to meet its inflation target, suggesting that no significant changes will be made to its monetary easing stance for the time being.