The JPMorgan Global PMI™, compiled by IHS Markit, held steady at 51.2 in June, signalling the slowest rate of expansion of global output since June 2016 during the past two months. The survey data are consistent with worldwide GDP rising at an annual pace of approximately 1.8% (at market prices) in the second quarter, down from 2.4% in the first quarter.

Both the PMI and official GDP data indicate that the pace of global economic growth peaked at 2.9% at the end of 2017 and has since slowed gradually, led by a steady weakening of worldwide trade flows. 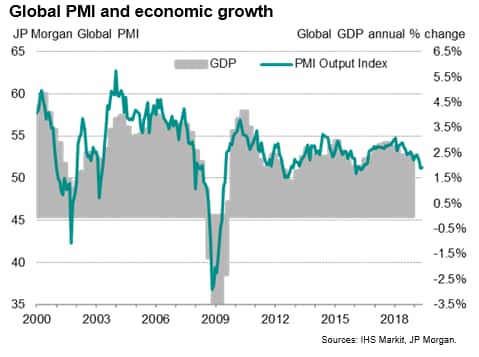 Manufacturing remained the main area of weakness in June, with output falling for the first time since October 2012. Global goods exports fell for a tenth successive month, dropping at the steepest rate since September 2015.

Although service sector growth perked up slightly during the month, the rise in activity was still among the weakest seen over the past three years. The sluggish services expansion adds to signs that the sector has seen growth weaken markedly in the second quarter alongside the manufacturing malaise.

New order inflows improved slightly on May but remained among the weakness seen over the past three years, impeded by a second successive monthly decline in manufacturing orders, which fell at an increased rate. Service sector new business inflows picked up, though continued to run well below levels seen earlier in the year. 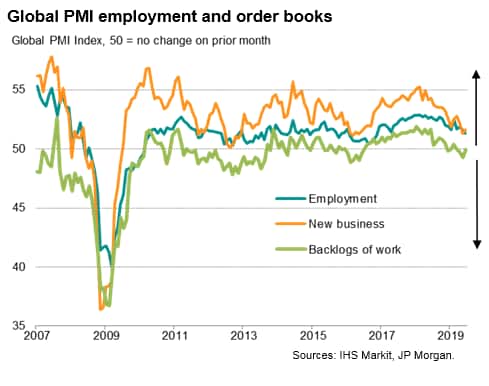 The weakened inflows of new work mean order book backlogs were unchanged, indicating few capacity pressures. Employment growth consequently slipped, down to the lowest since November 2016. A net loss of factory jobs for the second successive month was accompanied by reduced net hiring in the service sector.

Firms' appetite to take on extra staff was also hit by a further reduction in companies' expectations of their own output in a year's time (the only subjective question asked in the PMI surveys), which fell to the lowest since data on the outlook were first collected in mid-2012. Sentiment weakened in both manufacturing and services during the month, the former remaining especially gloomy. 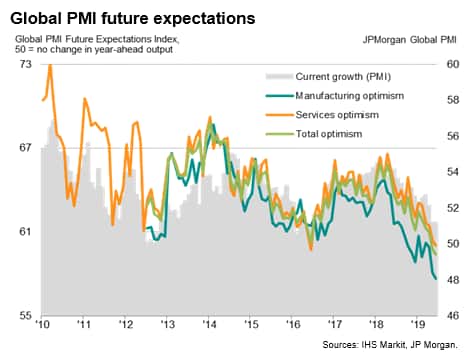 Cost pressures continued to moderate alongside the slowing global economy, with weaker demand again often cited as having diminished firms' pricing power. Input cost inflation slipped to the lowest since September 2016. Average selling prices for goods and services meanwhile rose globally at a slightly faster rate than in May, though the latest rise was still the second-smallest since November 2016. Prices rose most sharply for consumer services, consumer goods and business services, where demand conditions have remained the most robust. In contrast, prices fell for financial services for the first time since 2016, linked to lower interest rates. 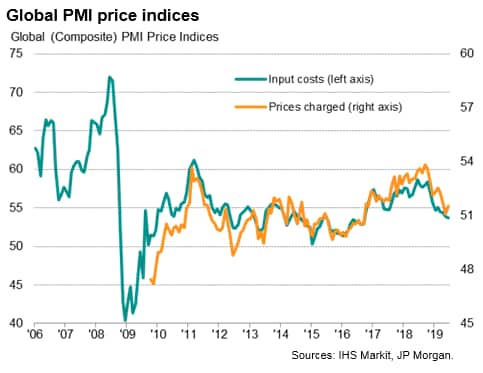 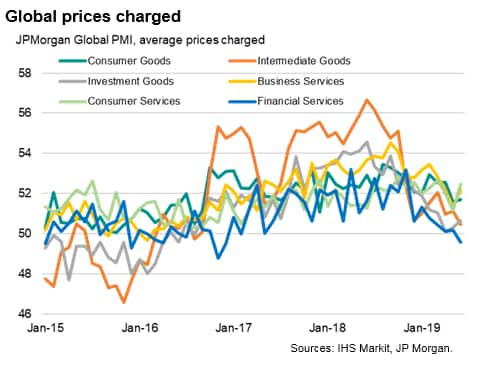 Growth lifted slightly higher in the developed world, but the improvement failed to prevent the rich-world economies enduring the worst calendar quarter since the start of 2013. The sustained weak PMI reading in June reflected a fourth consecutive monthly decline in manufacturing output and the second-smallest service sector expansion seen over the past 33 months. Jobs growth in the developed world also moderated to the joint-lowest since late-2016 and future expectations deteriorated to a new low. 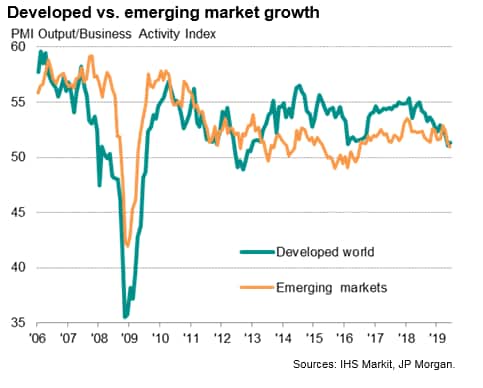 Among the largest advanced economies, the Eurozone saw the strongest PMI for the second successive month, with growth accelerating to the highest since last November as an improved service sector expansion helped offset an ongoing manufacturing downturn. Growth also edged higher in the US but eased markedly over the second quarter, as the slowdown broadened out from manufacturing to services.

Growth also remained stuck in a low gear in Japan thanks mainly to falling manufacturing output, running close to the weakest seen over the past three years.

However, the worst performance among the biggest developed countries was the UK, where the PMI surveys indicated the first contraction of business activity since the 2016 EU referendum, as Brexit-related uncertainty exacerbated the wider economic slowdown.

Emerging market growth was meanwhile the weakest for three years amid a broad-based deterioration in performance. Manufacturing stagnated while the service sector grew at the slowest pace for just over one-and-a-half years. Emerging market employment dropped for a second successive month and future expectations sank to the lowest since January 2016.

Looking at the four largest developing economies, both Brazil and Russia recorded falling output in June, the former reporting the second successive monthly decline while the latter saw the first downturn since the start of 2016.

Both China and India continued to expand, but rates of growth slowed to eight- and 13-month lows respectively. 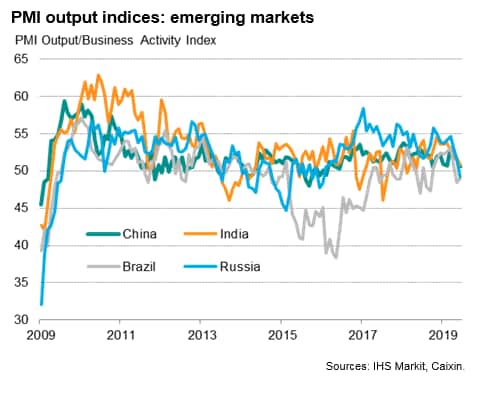