The latest global PMI data showed the pace of worldwide economic growth remaining stuck at a three-year low in June, but a detailed analysis of the data showed deepening downturns in some key sectors.

At 51.2, the JPMorgan Global PMI™, compiled by IHS Markit, remained unchanged at a three-year low in June, having lost momentum steadily over the course of the past year. The index, which measures changes in total output across both manufacturing and service sectors, revealed that the manufacturing sector continued to act as a major drag on growth. Factory output fell in June for the first time since October 2012. Service sector growth remained more resilient, and even perked up slightly in June, though remained in its worst growth spell for three years. 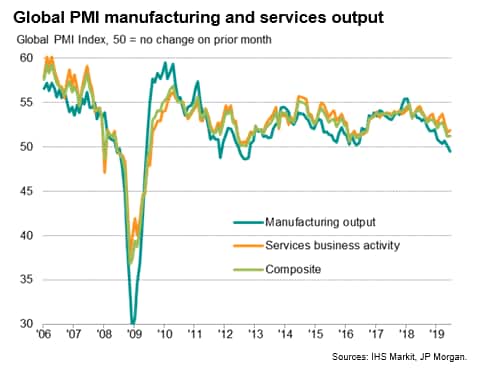 It is possible to dig deeper to see the main growth drags and drivers via the detailed sector PMI numbers, which provide unique economic indicators for some 26 sectors globally (as well as for Europe, Asia and - to a broader degree - the US).

Of the 26 global sectors, the number reporting lower output eased from 11 in May to nine in June, but some of those sectors remaining in contraction sent especially worrying signals about the health of the global economy.

Two sectors in particular are machinery & equipment and technology equipment manufacturing, as these are key indicators of business investment. Both have trended sharply lower in recent months. 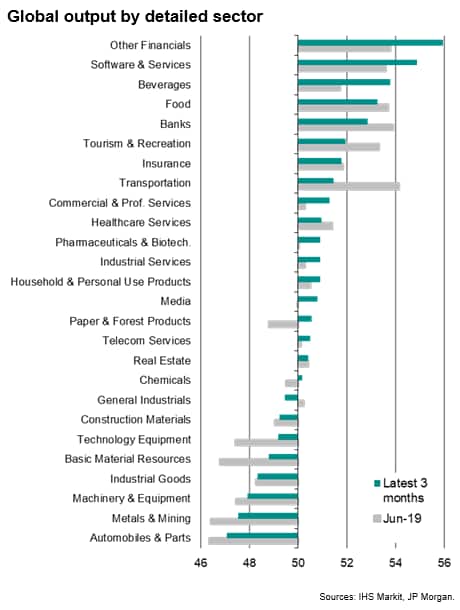 Production of machinery and equipment fell in June to an extent exceeded only once (last February) since detailed global sector PMI data were first available in late-2009. Output of this sector has fallen continually so far this year, representing the worst performance since the global financial crisis.

Production of tech equipment meanwhile dropped at the sharpest pace since November 2012, down for the third time over the past four months. 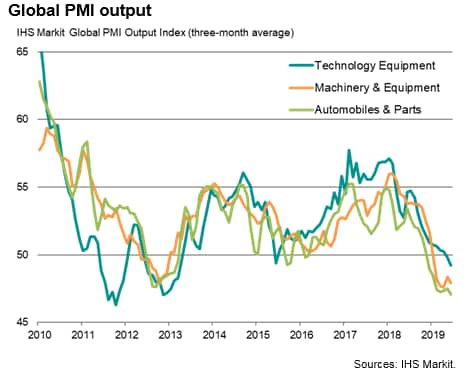 A broader PMI gauge of global investment goods production showed a similar weakness, with output down for a sixth month in June. Although some easing in the rate of decline was evident in the latest month, the average drop in output in the three months to June was the steepest calendar quarter decline since the final three months of 2012 (a downturn which was subsequently followed by a drop in official global fixed capital investment data). Official data have already shown annual global business investment growth cooling sharply up to the first quarter of the year, running at less than half the pace seen a year earlier, closely following the trend in the PMI data. The survey data therefore point to a further moderation in the second quarter. 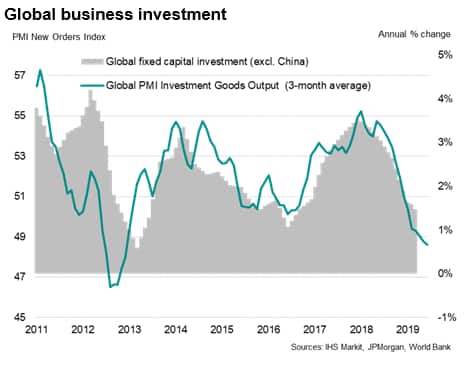 The downturn in capex spend signalled by the global PMI data highlights the extent to which rising geopolitical uncertainty has led to a broad pull-back in business spending which is likely to subdue economic growth. However, with business investment being a major determinant of future productivity and profitability, the drop in capex spend signalled is a particular red flag for future corporate earnings.

Another sector of concern is automobiles, which sat at the foot of the global sector PMI rankings in June as output fell at the second-steepest rate since 2009.

The survey data indicate that car sector output has now fallen continually since last September. However, whereas declines late last year were in part caused by temporary disruptions such as new emissions regulations in Europe (which many therefore saw as being temporary), the ongoing weakness in 2019 paints a more worrying picture of weakening demand for autos.

Such a weakening of orders books often leads to cuts in employment, so it was little surprise to see employment falling in the autos sector in June, with jobs being lost globally at the sharpest rate for over two years. 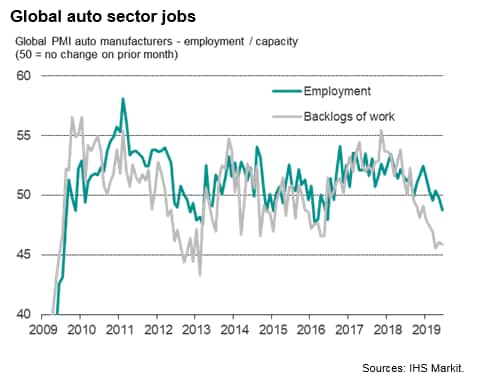 With the June survey also seeing a record drop in input buying by auto makers, a further cut in production is indicated for July.

The PMI data tally closely with official data on auto production. According to industry data collected by IHS Markit, global light vehicle production fell in year-on-year terms throughout much of the second half of 2018 and continued to slide in the first quarter of 2019. Estimates based on partial data point to the rate of decline having accelerated in April before easing somewhat in May. Encouragingly, the forecast model points to a stabilisation of production in the second half of 2019 and modest return to growth in 2020. However, the PMI data will need to turn sharply higher in coming months for growth to stabilise, suggesting some downside risk to the brighter near-term outlook. 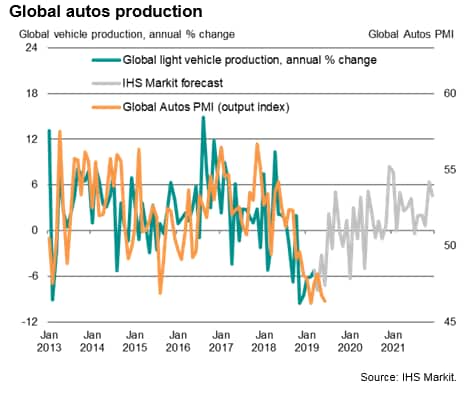 Looking at the best performers, the global PMI sector rankings were led in the three months to June by 'other financials' (which covers all financial firms other than banks and insurance companies) followed by software & services. With banking services and insurance also in the top seven sectors, financial services as a whole notched up the best performance of all the broad industry sectors in the second quarter.

The best performing manufacturing sectors were food and drink, with pharmaceutical & biotech coming next at eleventh place, all of which are widely seen as typical 'defensive', non-cyclical sectors.