Anecdotal evidence from global survey panellists shows that the worldwide outlook is becoming increasingly gloomy. Long-running trends such as trade wars and political tensions continue to dampen businesses' forecasts, while new tensions in Asia add to fears of an uncertain future.

Alongside these responses, panellists are invited to provide additional qualitative information on the reasons as to why these variables or (in the case of future expectations) their views have changed from the previous month. Our panel comments tool collects data tracking the frequency of words or phrases mentioned in these qualitative replies. Analysing these data over time gives helpful insight into the key trends affecting businesses both nationally and globally, and thereby reveals the driving forces behind changes in the 'hard' data.

The Future Output Index in the J.P. Morgan Global Composite PMI was the lowest in the seven-year history in July. This is based on businesses' outlooks regarding activity over the coming year.

Panel comments illustrate the reasons why businesses have become less upbeat. In general, besides a dip in current sales, these gloomier prospects often reflected growing uncertainty across the globe due to the news flow of weaker economic data, lower sales enquiries, political tensions and a deteriorating trade environment. In fact, July saw the highest number of comments surrounding these themes since December 2012, having previously spiked during the financial crisis and EU debt crisis.1 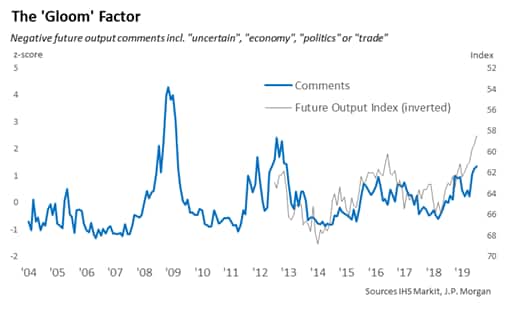 Many of the concerns leading to dampened forecasts have been developing over the past year. Chief among them is the US-China trade war, which escalated in May after the US raised tariffs on $200bn worth of Chinese goods. May and June surveys subsequently saw negative panel comments about the impact of the trade war swell. They dipped back down in July, however, as commitments at the G7 summit to reopen trade deal negotiations allowed for a calmer business environment. 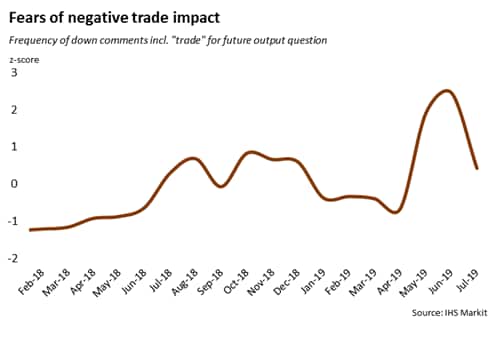 Nevertheless, August survey data may signal renewed concerns among global panellists. President Trump's announcement on 1st August of tariffs on the remaining $300bn of Chinese exports is likely to severely reduce any hopes of a break-through deal, as well as damage business sentiment and trigger fresh concerns about the world economy for the rest of the year.

PMI data have already revealed growing risk to the global economy. Manufacturing conditions have been deteriorating since May, while services activity has seen moderating growth since earlier in the year. Comments from firms on local and international economic conditions have also become increasingly pessimistic. As such, in recent weeks, investors have moved to safe havens while the Fed and many Asian central banks lowered interest rates, showing that predictions from the PMI surveys are now being realised further afield.

Brexit remains another key theme in comments from businesses positing an uncertain outlook. Panellists are highlighting a greater risk of a no-deal scenario, as the relationship between the new UK government and the EU appears to fracture. This is a grave concern not just for UK firms. Brexit issues and worries of a hard border with Northern Ireland meant comments from the Irish panel of a negative impact on future output reached the highest so far in July. Other countries such as Germany have also seen Brexit worries increasingly appear as causes for gloomier outlooks. 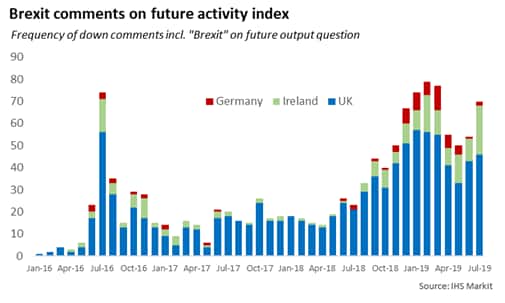 More recent issues such as Japan-South Korea tensions and protests in Hong Kong have also been flared by global panellists. The former has seen bilateral trade deteriorate rapidly, as export controls from Japan have led South Korean businesses and consumers to boycott Japanese products. This could grow into a wider concern, particularly for many tech companies whose supply chains depend strongly on the region. Meanwhile, protests in Hong Kong have gained momentum and are particularly harming business activity, with the Hong Kong PMI at a decade-low in July. 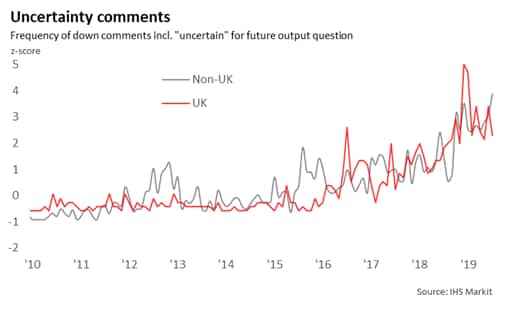 All of this is feeding a heightened degree of global uncertainty. Comments from panellists including the word "uncertain" have been building for some time, as themes such as Brexit and the US-China trade war develop. July saw comments from non-UK businesses reach the most frequent in the series history. This is unsurprising, as the twisting and turning nature of these issues makes it difficult for companies to forecast their own future.

With the PMI covering a broad range of countries, the surveys remain a key barometer of global business sentiment, while anecdotal evidence from panellists offers a powerful illustration of the concerns affecting firms worldwide. For the rest of 2019, the main story is one of mounting tensions, and an increasingly melancholic outlook for global growth and geopolitical relationships.

Our upcoming surveys will lend further insight into the issues surrounding businesses globally.