According to the November PMI, Italian private sector output declined at the sharpest pace in five years. Our survey data suggest the Italian economy will decline once again in the fourth quarter following a 0.1% quarterly contraction in GDP in the third quarter, meaning the country will enter a technical recession for the first time since 2013.

Risks also seem firmly skewed to the downside for Italy: the growth trend has weakened across the eurozone, fiscal stimulus plans have come under severe scrutiny in Brussels, instability has risen within the financial markets and the domestic economic backdrop has deteriorated.

The IHS Markit Composite Output Index was unchanged from October's five-year low of 49.3 during November. The decline signalled a contraction in the Italian private sector economy across both months thus far in the fourth quarter, with the rate of decline gaining momentum. 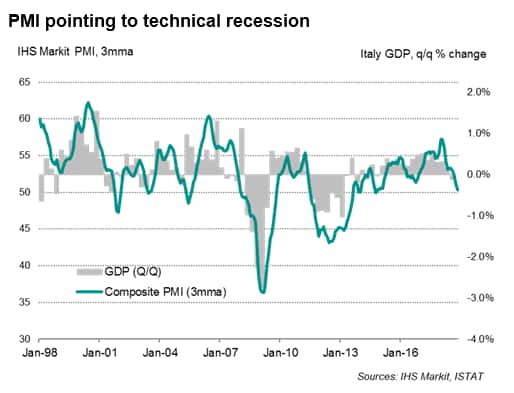 If the Italian economy contracts in the fourth quarter, it will mean that the third largest euro area country will enter a technical recession (defined as two consecutive quarters of falling output) for the first time since 2013. Indeed, our fourth quarter GDP 'nowcast' is pointing to another 0.1% decline in GDP.

The sector breakdown was equally bleak. The manufacturing sector is leading the downturn, with the production of goods declining at the strongest rate since the debt crisis in 2013. Although business activity in the services sector steadied in November after a decline in October, the index reading of 50.3 was sharply lower than those seen in the first two quarters of the year. 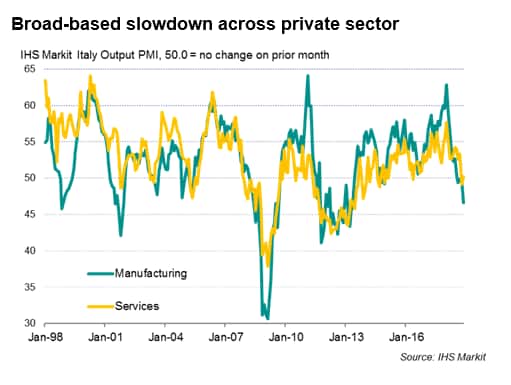 The survey data pointed to underlying woes as private sector new orders fell for a second successive month in November. In comparison to fellow eurozone peers, Italy is a clear underperformer and has led the broader easing of momentum across the single currency area. Companies have been reporting underlying weakness in domestic demand for several months now, particularly manufacturers, linked to worries about trade wars but also heightened political uncertainty and tightening financial conditions. 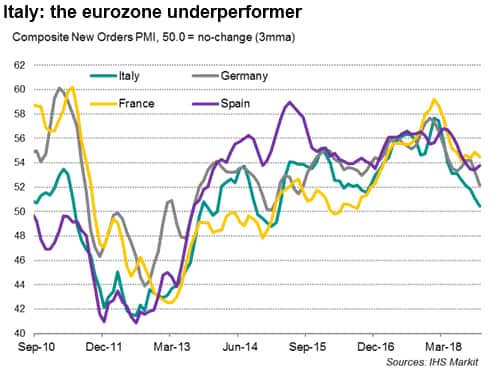 The downturn has not been confined within Italian borders, however, as poor international order inflows have fuelled the slump. Our newly-released Composite PMI New Export Orders Index suggests that exports could provide a drag on the net trade contribution to Italy's GDP in the fourth quarter. 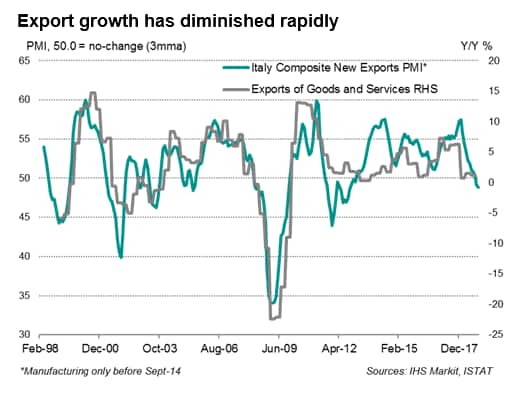 In recent months, challenges on the international front have reportedly been driven by especially disappointing trade to Turkey and Germany. Headwinds facing the automotive sector, linked to new emissions regulations, have also been blamed by both manufacturers and service providers.

With scant signs of an imminent revival of demand pressures evident in the recent survey data, it is therefore likely that businesses in Italy could scale back output further in the coming months.

Other factors present additional headwinds to the Italian economy. The incumbent populist government's proposed fiscal stimulus package, which has been heavily scrutinised at Brussels, could become economically damaging if there are further escalations in political tensions. This political distress, in combination with the end of the of the European Central Bank's asset purchasing program, present notable risks to the Italian bond market. The impact on the real economy can be difficult to initially estimate, though survey data have indicated that the rise in political risk (proxied by bond yields) has led private sector firms to pare back their expectations of business growth over the coming 12 months. Business confidence is among the lowest since 2013. 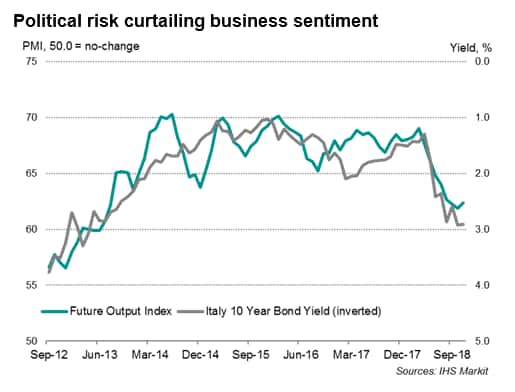 In summary, PMI data for the fourth quarter are consistent with a second successive quarterly contraction in GDP, suggesting that the Italian economy is set to enter a technical recession for the first time since the eurozone debt crisis culminated in 2013. With growth in the rest of the single-currency area lagging, underlying demand pressures easing, political risks coming to the fore and financial markets seemingly stressed, risks to the Italian economy ultimately seem skewed to the downside.