The worldwide PMI surveys indicated a strengthening of global economic growth in July, led by rebounding activity from COVID-19 lockdowns notably in Europe and Russia as well as sustained robust expansion in China. US business activity stabilised but remained subdued by virus containment measures, however, sending a warning signal that global growth could slow again after the initial rebound amid rising worries over second waves of virus infections. An additional concern is that worldwide employment continued to fall despite widespread government policy support, with job losses even accelerating in some countries.

The JPMorgan Global PMI™ (compiled by IHS Markit) rose for a third successive month in July, up from 47.8 in June to 50.8. The latest reading breached the no-change 50.0 level for the first time in six months to indicate expanding output across the combined manufacturing and service sectors. 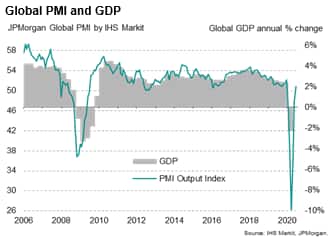 Despite the rise, the PMI remains below the level seen at the start of the year, as well as below both the 2019 average (51.7) and the average seen over the past decade (52.3), indicating that the rate of growth remains subdued.

We use a linear regression to estimate the annual growth rate of GDP implied by the PMI. This model indicates that the annual rate of decline likely peaked at approximately -12% back in April at the height of worldwide COVID-19 related lockdowns, but that the relaxation of virus restrictions has since helped drive an improvement to an 0.6% annual rate of growth in June and a 2% rate of growth in July. Note that this does not indicate that the economy is 2% larger than a year ago, merely that the rate of growth on an annual basis has improved to around 2%, which still represents a very modest rate of expansion relative to the collapse seen at the height of the pandemic.

Note also that the global PMI dropped a cumulative 54.5 points into negative (sub-50) territory between February and June, and has now only seen 0.8 index points in growth territory, highlighting the small steps taken so far in recouping output lost to the coronavirus.

The PMI had collapsed to an all-time low of 26.2 in April as governments around the world took increasingly drastic measures to contain the COVID-19 pandemic, including the widespread closures of non-essential businesses and restricting movement and travel. Since then the PMI has risen sharply as these containment measures have been eased, though the still-subdued level of the PMI reflects the fact that some measures remain in place, and recent weeks have even seen some restrictions re-imposed.

The degree to which economies have deem 'locked down' in the fight against the pandemic can be gauged by IHS Markit's COVID-19 Containment Index. This gauge is based on a basket of measures applied by governments to control the spread of the pandemic, such as non-essential business closures, school closures and travel and mobility restrictions linked to social distancing policies. As these measures are tightened, the index rises towards 100 and a relaxation of measures causes the index to fall towards zero. 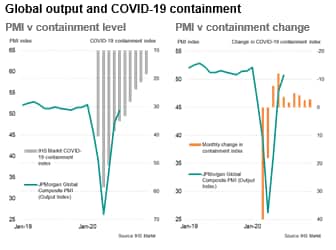 The global average COVID-19 Containment Index has eased from a peak of 59 in April to 35 in July. Over this period, companies participating in the PMI surveys often noted how the re-opening of economies helped spur business growth, both via some firms being permitted to open their doors again and demand from customers reviving. 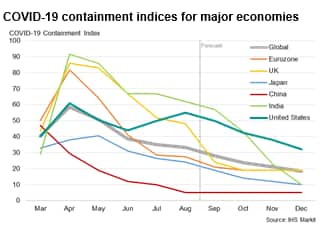 The good news is that, despite increased fears of resurgent COVID-19 infection numbers, pandemic restrictions are still set to ease in coming months, with the Global Containment Index due to fall to 33 in August and eventually dropping to 18 by the end of the year, assuming governments do not alter their lockdown plans.

However, it's clear that the pace of opening up the world's economies has slowed, which will likely affect the PMI numbers going forward. Even on current virus number trajectories, each month will see only small steps in removing containment measures compared to earlier months, which will provide less of a boost to the PMI. It should also be noted that the Global Containment Index is still set to remain at 18 by December (zero indicates no restrictions), which suggests that ongoing COVID-19 social distancing measures are likely to subdue economic growth at least until the end of the year. The reality is that we will see these containment measures persist well into 2021. The risk is that growing worries about second waves of infections will also push containment tighter again.

The link between coronavirus lockdowns and PMI readings is further illustrated by comparing the national composite PMI readings (encompassing both manufacturing and services) relative to national containment indices. 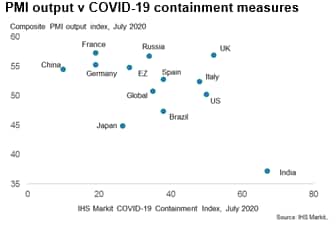 The comparisons show, for example, that India saw the tightest COVID-19 restrictions of the economies surveyed in July, and also saw the lowest PMI reading. China, with the loosest restrictions fared well in terms of PMI growth, albeit outpaced by France, Russia, the UK and Germany. The UK composite PMI hit a five-year high, with 29- and 23-month highs seen in France and Germany respectively, pushing the eurozone PMI to a two-year high. In Russia, the composite PMI hit a three-and-a-half year high, buoyed by the largest jump in service sector activity since 2008. 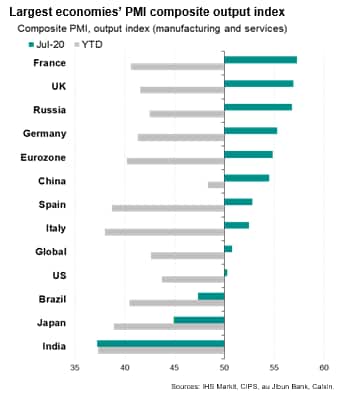 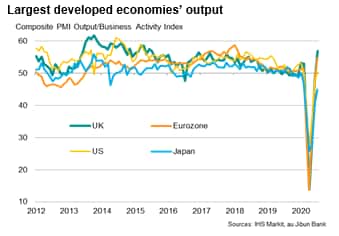 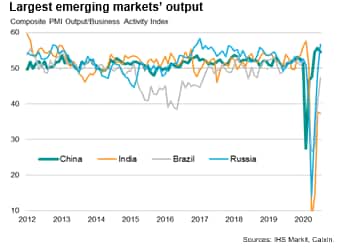 These variations in performance are of course a function not just of the degree of containment but also the change in containment: whereas China saw its containment index ease by two points in July, the eurozone and UK saw 12.5 and 15-point easings respectively. In Russia, the containment index has meanwhile slumped from 67 in May to 34 in July.

The relatively poor performance of the US, which saw only a modest expansion of business activity to thereby slip below the global average in July, was often linked to the re-imposition of lockdown measures in some states (the US Containment Index rose from 44 in June to 50 in July), as well as growing worries about the lingering economic impact of the crisis. Note that new orders for goods and services fell in the US, albeit only modestly, contrasting with increasing growth in Europe and China, the latter seeing the largest gain in new orders for almost ten years. 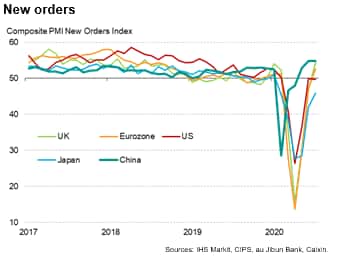 China leads in the year-to-date

The relative success of China in containing the virus and reopening its economy is reflected in China's composite PMI running far higher than any other major economy so far this year: an average PMI reading of 48.3 against a global average of 42.6.

Outside of China, the best performance (or more correctly the least severe downturn) has been seen in the US, in part reflecting a relatively low COVID-19 containment index on average up to June.

The worst year-to-date performances have been seen in India followed by Japan and Brazil. Both have been hit hard by the pandemic as well as the recent steep downturn in global trade, with Japan also marred by a prior sales tax hike, which dampened consumption.

The global manufacturing sector reported a larger output gain than the service sector, and has also reported the stronger performance so far this year, though both returned to growth for the first time since January. 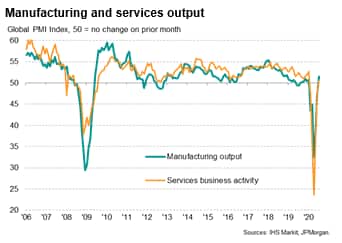 The strong performance of autos was especially notable, reflecting the restarting of production after closures and rising sales as customers returned to forecourts, especially in Europe.

Resurgent growth in household goods production largely reflected the re-opening of retail, while the return of workers to building sites boosted demand for construction materials.

Besides other (non-banking) financials, the tourism and recreation sector saw the steepest decline in output in July, reflecting ongoing social distancing precautions. The sector has also seen by far the steepest downturn in the year-to-date. Not surprisingly in the face of the pandemic, healthcare and pharmaceuticals have fared best (by considerable margins) so far during 2020, followed by food producers. 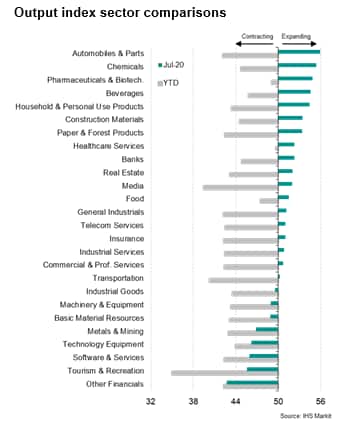 Virus numbers and associated containment measures will clearly be the most important determinants of economic recovery paths in coming months, but the job market will also be important to watch, especially as job retention programmes come to an end in some countries. A jobless recovery would likely be tepid at best, and ultimately short-lived after the initial rebound from lockdowns and temporary non-essential business closures.

So far, the global PMI has seen new order inflows rise in July for the first time since January, helping reduce the rate of job cutting to the weakest since February. However, the rate of order book growth lagged that of output, indicating that at least some of the upturn in output was fuelled by firms processing orders placed in prior months (often prior to the pandemic) rather than reflecting new demand. Backlogs of works consequently continued to fall, albeit at a reduced rate.

Jobs were therefore subsequently cut again, dropping globally for a sixth successive month, as firms continued to scale back operating capacity despite the small rise in new orders in July. Worryingly, the rate of job cutting remained higher than at any time seen over the past 11 years prior to the pandemic. 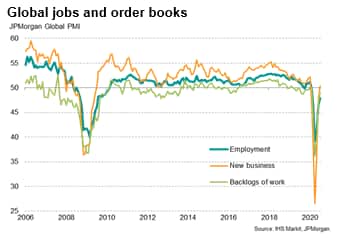 The US bucked the global trend of falling employment in July, registering a composite PMI employment index above 50 for the first time since February. In contrast, rates of job cutting accelerated in Japan and India and failed to ease in the UK, where the service sector cut headcounts at a faster rate. 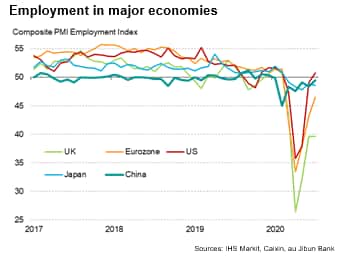 Over the year so far, UK has recorded the sharpest fall in employment of the major economies, followed by the Spain and then Brazil. The smallest declines have so far been seen in Japan followed by China. The resilience of labour markets in both China and Japan have been especially noteworthy during the pandemic. 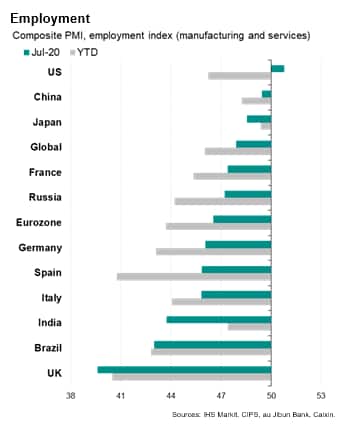 Jobs data for all countries will be especially important to watch as, in many cases, the current situation reflects payroll number having been supported either through direct furlough schemes or by other fiscal stimulus measures. Governments will need to be careful in unwinding these schemes to prevent a further steepening loss of jobs, especially in sectors such as hospitality where demand is unlikely to return swiftly in the absence of a vaccine or effective COVID-19 treatment. 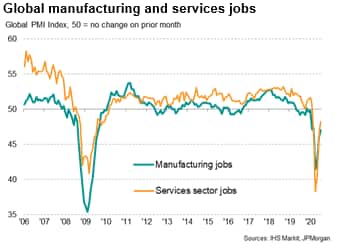 Service sector jobs fell more sharply at the height of the COVID-19 lockdowns than factory employment, but are now showing signs of recovering more rapidly, although numbers are still falling. In July, real estate, healthcare services, pharmaceuticals and biotech led the jobs rebound, but all other sectors reported falling payroll numbers. The steepest declines seen in metals & mining and autos (despite the latter seeing the latest output gain during the month).

So far this year only healthcare services and pharmaceuticals & biotech have reported any growth in employment. Tourism & recreation has seen the steepest decline, by a wide margin, followed by auto makers. 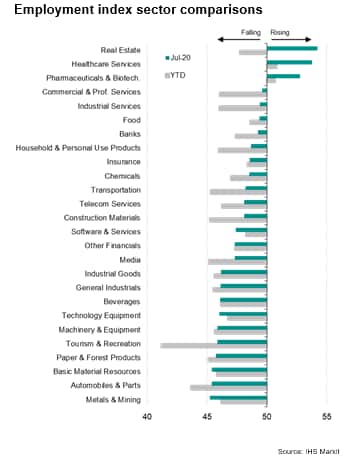 The outlook therefore depends on whether the demand indicators will continue to improve beyond the initial rebound from the lockdowns, and in particular how employment will hold up when support measures are removed, all of which will in turn be dictated by the path of the pandemic. Any renewed faltering of the PMIs in coming months will flash warning signs of a W- rather than V-shaped recovery, as is already being hinted at in the US.