Worldwide PMI surveys indicated that manufacturing once again broadly stagnated in April, with growth of business activity running at its lowest since mid-2016. New order inflows continued at one of the slowest rates since 2012 amid a further decline in worldwide exports.

Weak demand meanwhile pushed price pressures down to the lowest for two and a half years.

By country, Greece reported the strongest upturn, contrasting with Germany, which continued to see the steepest downturn, ensuring the Eurozone once again acted as a significant drag on the global manufacturing economy. The US moved up the rankings, while the surveys indicated a renewed downturn in Canada. Both Japan and China eked out modest gains, helping to keep Asia in expansion mode.

The headline JPMorgan Global Manufacturing PMI, compiled by IHS Markit, fell to 50.3 in April, down from 50.5 in March and its lowest since June 2016. 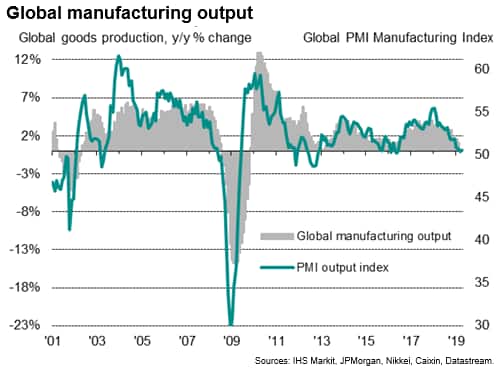 The PMI is a diffusion index derived from five survey questions, where 50 indicates no change in business conditions compared to the prior month. As such, the PMI has signalled only a marginal improvement in the health of the worldwide manufacturing sector in each month so far this year. The stalling contrasts with robust growth indicated this time last year, when then PMI registered 53.4, indicative of annual production growth approaching 4%.

Some better news came from the breadth of the slowdown, however, as the number of countries that reported a deterioration or stagnation of manufacturing conditions, defined as a PMI reading at or below 50, fell from 13 in March to nine in April (albeit still up markedly from just four in April of last year). 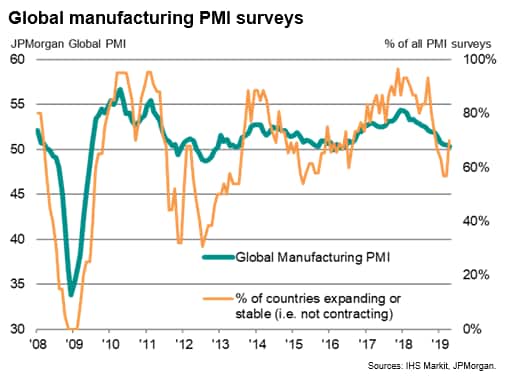 Looking into the detail at the sub-indices, global factory output rose only fractionally for a second successive month, registering the second-weakest expansion since June 2016. New order inflows likewise barely rose, having now failed to record any material growth since last November. The flat order book picture is the worst since 2012.

The order book trend has been subdued in particular by weakened global trade flows. New export orders fell in April for the eighth successive month, registering a similar rate of decline to that seen in the prior two months. Although only modest, the rate of decline contrasts markedly with surging worldwide export growth seen at the start of last year. 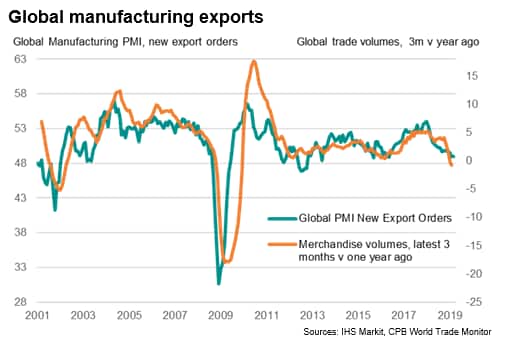 The lack of new sales meant producers ate into previously-placed orders to maintain production levels. Backlogs of orders fell for a fourth successive month, with the past two months registering the steepest back-to-back monthly falls since the end of 2012.

Falling backlogs tend to be indicative of excess capacity, and often lead to lower job creation. Employment growth consequently fell in April to the lowest since September 2016, with headcounts rising only marginally during the month. 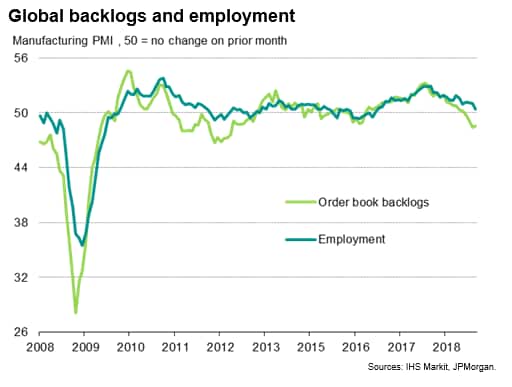 Expectations of future output meanwhile dipped lower, dropping closer to the near seven-year low recorded in February and hinting that the manufacturing soft patch will persist in coming months.

A beneficial consequence of the recent waning of demand has been an easing of supply chain delays to the lowest since March 2016. Delivery times are closely correlated with prices (longer deliveries usually mean suppliers are busier and can more easily raise prices, and vice versa). Purchases of inputs by manufacturers fell for a third consecutive month, and the resulting easing in supplier delays has helped bring raw material price inflation down, offsetting the impact of higher oil prices. The rate of input cost inflation fell in April to the lowest for two and a half years. 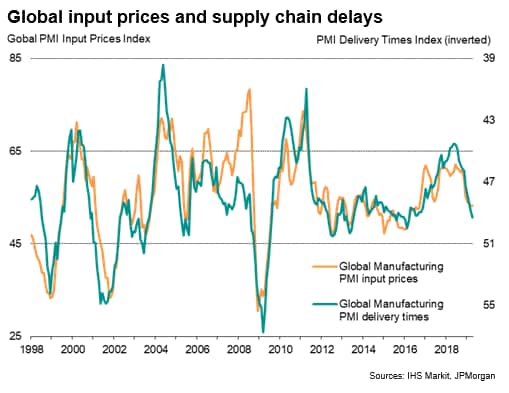 Average selling price inflation likewise moderated to the lowest since September 2016 on the back of slower growth of input costs, as well as intense competition among sellers.

The number of countries reporting a deterioration of manufacturing conditions eased to nine out of the 30 economies covered by IHS Markit's PMI series. The steepest downturn was again recorded in Germany, followed by its close neighbours the Czech Republic and Turkey. Poland, Italy and Austria were likewise among those countries reporting a downturn.

At the other end of the rankings, Greece recorded the strongest expansion as the country's production revival continued, followed by Myanmar. The UK and Ireland featured in the top five rankings, albeit both buoyed by pre-Brexit stock-piling. 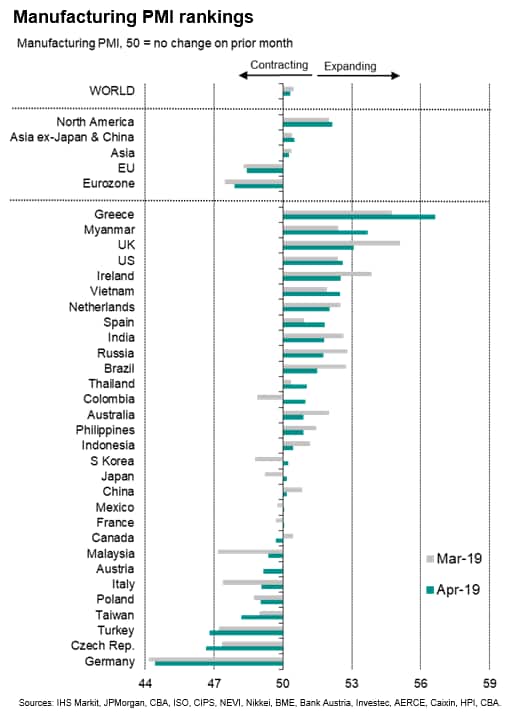 The US meanwhile moved up into fourth place from ninth in March, contrasting with the weakness seen elsewhere in North America: Canada's manufacturing economy slipped into decline for the first time since early-2016 and Mexico stagnated.

In Asia, Taiwan replaced Malaysia in recording the steepest deterioration of business conditions, but China remained in expansion mode according to the Caixin PMI, and Japan's Nikkei PMI climbed back above 50 for the first time in three months. However, in both cases, manufacturing conditions in Asia's two largest economies improved only marginally.

Looking by region, North America continued to lead the upturn thanks to the improved US PMI, while Europe (and the eurozone in particular) remained the biggest drag on the global manufacturing economy. Asia eked out only a modest growth. 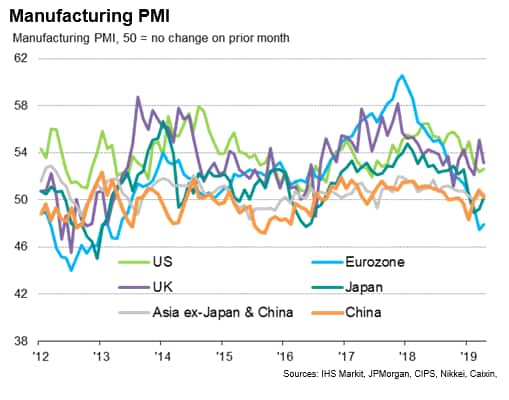