South Africa remained in recession at the start of the year, with a first-quarter fall in GDP of 2% on an annualised basis. With the nationwide lockdown at its strictest in the second quarter, PMI data signalled that the downturn is set to deepen sharply in the three months to June. Business closures and a steep drop in client demand reportedly led to severe reductions in activity, according to the survey. Lockdown measures were eased in June, but with cases mounting and some measures reimposed in July, the economic outlook for the private sector remains challenging.

Recession continues in 2020 amid first quarter drop in GDP

South Africa recorded its third successive quarterly contraction in GDP at the start of 2020, posting an annualised 2% fall in the three months to March. This translated into a 0.1% annual fall in GDP, broadly consistent with that signalled by the South Africa PMI. 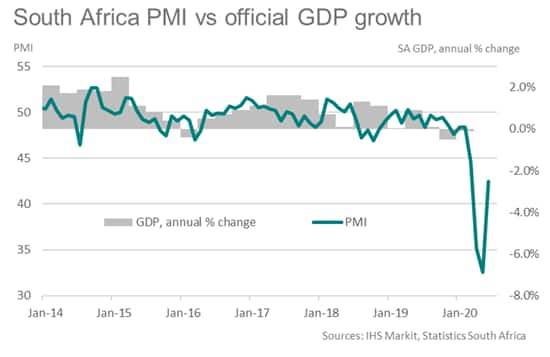 On a sector basis, the largest negative contributors to GDP were mining & quarrying and manufacturing, which contracted 22% and 9% respectively. Combined, they lowered first-quarter GDP by approximately 2.8%, outweighing an overall expansion in the remaining sectors of the economy.

A likely driver of the decline was the emergence of coronavirus disease 2019 (COVID-19) in China and Southeast Asia during January and February, with lockdown measures notably hampering global trade within the region. In March, key European trading partners also went into lockdown, further constraining foreign demand. Combined with ongoing electricity supply issues in South Africa, these were clear depressors on GDP at the start of the year.

Even more concerning for economic growth is that South Africa implemented their own nationwide lockdown at the end of March, just days before the close of the first quarter and continuing throughout the second quarter. These measures included a ban on non-essential travel, closure of non-essential shops and a nightly curfew. Key sectors of the economy, such as mining, manufacturing and construction, were effectively halted during this period.

The South Africa PMI signalled that these measures had a notable impact on the private sector economy, with the PMI falling to a record low of 32.5 in May. Output contracted at a substantial pace as many companies were closed or operated at reduced hours, with client demand also falling heavily. An easing of measures on business activity in June allowed some firms to reopen and a partial recovery of the PMI, but nevertheless conditions remained subdued. 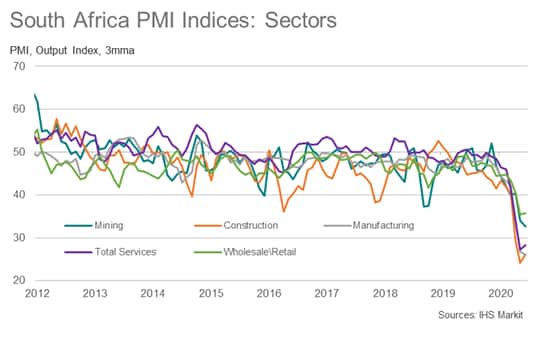 As a result, it is expected that GDP will fall at a much sharper pace in the second quarter of 2020. All sectors are likely to see declines, with services set to join areas such as mining and manufacturing in negative territory. Exports are also likely to be hit as the global trade environment worsened considerably following lockdown measures across the world.

In addition, price inflation moderated further in May, with the CPI dropping from 3.0% in April to 2.1%, the lowest since September 2004. This decline was reflective of the trend seen in PMI data, as the Input Prices Index dipped to its lowest on record during May. Businesses found that weak demand for input materials drove a reduction in supplier prices, in addition to a fall in global oil prices. However, the relaxation of global lockdown measures and increasing problems with the supply of materials meant the index recovered somewhat during June, suggesting a modest uptick in the inflation rate. 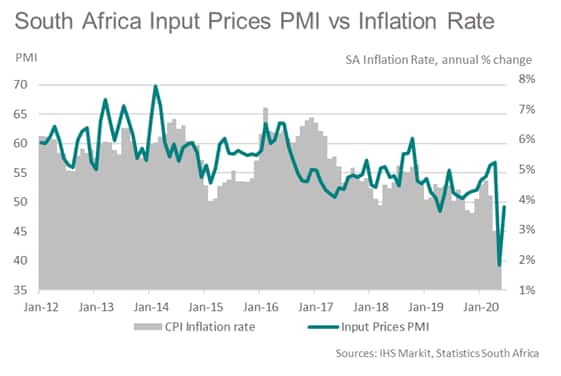 The outlook for future activity among South African businesses also weakened in the second quarter, PMI data suggests, as the lockdown led to much weaker projections for customer demand. Sentiment improved slightly in June from May's nadir but remained subdued.

Notably, South African companies were downbeat relative to other Sub-Saharan African countries, particularly in reference to the impact of the pandemic. Isolating comments from surveyed businesses linked to the possible recovery from COVID-19 showed that South Africa had the most negative outlook in the region in both May and June. This was understandable given higher infection numbers and the severity of lockdown measures in the country, but nonetheless showed the extent of pessimism among businesses. 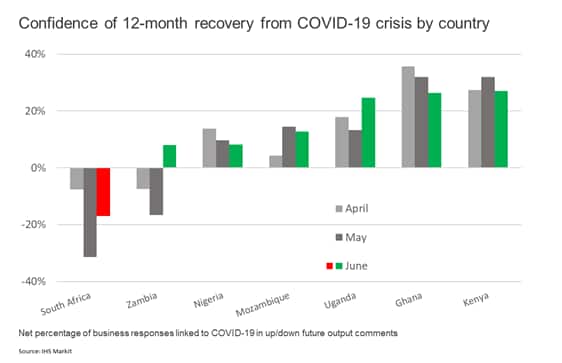 Moreover, despite the lockdown, South Africa appears to have been unsuccessful in containing the virus, as cases continued to rise exponentially at the start of July and at one of the fastest rates in the world. Localised spikes are appearing in Eastern Cape and Gauteng, which are predicted to peak during the third quarter. Subsequently, the government rowed back on some of its changes to lockdown rules and, on 12th July, announced the reimplementation of a night-time curfew and alcohol sales ban. 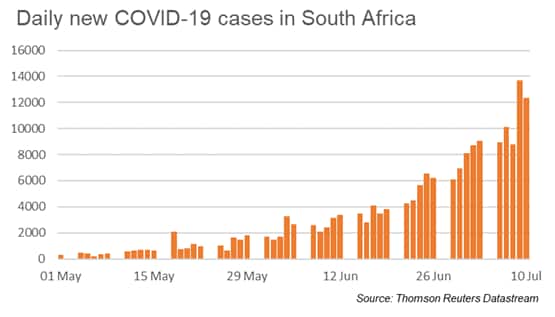 However, the government reiterated that the lockdown level remained the same, signalling their intent to encourage consumer and business spending while protecting the health system by discouraging gatherings. It is this tricky tightrope that the government looks set to walk during the third quarter and possibly beyond, and its path will likely define how businesses recover from the economic recession.