The worldwide PMI surveys indicated a further strengthening of global economic growth in August as countries continued to recover from COVID-19 lockdowns. New business inflows also accelerated, straining capacity such that August also saw a renewed rise in backlogs of work. Companies consequently eased back on job cutting, with August seeing a near steadying of employment levels. Future sentiment dipped lower, however, reflecting increased concerns about the outlook. The recovery was also by no means broad-based, with Italy and Spain both falling back into contraction amid rising infections, and India and Japan remained firmly in decline.

The JPMorgan Global PMI™ (compiled by IHS Markit) rose for a fourth successive month in August, up from 51.0 in July to 52.4 in August, its highest since March 2019. We use a linear regression to estimate the annual growth rate of GDP implied by the PMI. This model indicates that the annual rate of decline likely peaked at approximately -12% back in April at the height of worldwide COVID-19 related lockdowns, but that the relaxation of virus restrictions has since helped drive an improvement to a 2.6% rate of growth in August. Note that this does not indicate that the economy is 2.6% larger than a year ago, merely that the rate of growth on an annual basis has improved to around 2.6%, which still represents a very modest rate of expansion relative to the collapse seen at the height of the pandemic.

The August improvement reflected faster rates of expansion across both manufacturing and service sectors. Factory output rose at the steepest rate for 28 months while service sector growth lagged behind, albeit registering the strongest expansion since January, reflecting the ongoing greater hit to many types of services activity from virus-related social distancing measures. The faster growth of global output in August was accompanied by the largest monthly rise in new business inflows since January, volumes of which grew at increased rates in both manufacturing and services.

Encouragingly, the rise in new work led to the first increase in backlogs of work globally since February. Although only very modest, the increase was the largest since February 2019.

Further encouragement came from a near-stabilisation of employment. The increase in new business inflows and the renewed increase in backlogs of work caused more firms to take a positive view of payroll numbers, with the net loss of job in August only marginal and the smallest since global employment began falling back In February. 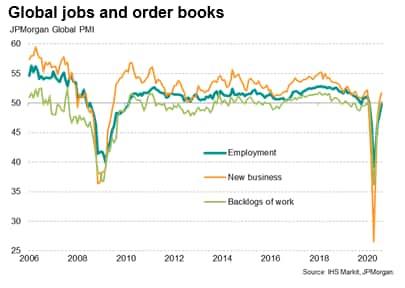 The improving picture from the PMI has followed an opening up of the global economy since the height of the pandemic earlier in the year. The PMI had collapsed to an all-time low of 26.2 in April as governments around the world took increasingly drastic measures to contain the spread of the COVID-19 virus, including the closure of non-essential businesses and schools and severely restricting movement and travel. Since then the PMI has risen sharply as these containment measures have been eased on average globally.

The degree to which economies have deem 'locked down' in the fight against the pandemic can be gauged by IHS Markit's COVID-19 Containment Index. This gauge is based on a basket of measures applied by governments to control the spread of the pandemic, such as non-essential business closures, school closures and travel and mobility restrictions linked to social distancing policies. As these measures are tightened, the index rises towards 100 and a relaxation of measures causes the index to fall towards zero. The global average COVID-19 Containment Index has eased from a peak of 59 in April to 35 in August. 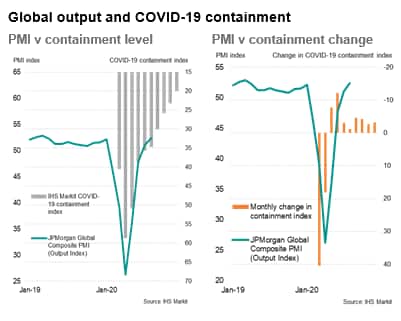 IHS Markit also projects future containment levels from government announcements of planned restrictions in coming months. Globally, the containment index is expected to fall further to 30.0 in September and eventually to 20 by the end of the year, though this assumes virus infection numbers and deaths do not diverge from expectations. Recent experience has shown that this cannot be relied on: back in early June, it was anticipated that the Global Containment Index would have fallen even further - to 27 - by August, given governments' prior notifications of planned loosening of restrictions. However, recent months have seen a retightening of some restrictions as virus numbers have increased, with higher than previously expected containment particularly evident in the US, Spain, Italy and India. 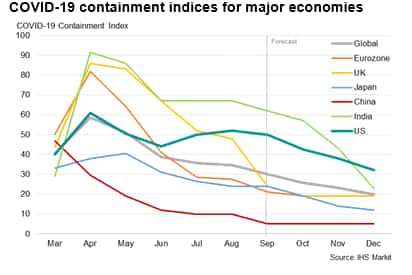 Furthermore, even on current virus number trajectories, each coming month will see only small steps in removing containment measures compared to earlier months, which will provide less of a boost to the PMI.

Similarly, given that the Global Containment Index is still set to remain at 20 by December (zero indicates no restrictions), ongoing COVID-19 social distancing measures are likely to be still subduing economic growth at least until the end of the year. Only with an effective treatment or vaccine will we see containment measures disappear, the path to which remains uncertain.

The overriding concern is that not only will growth naturally fade after the current initial bounce from the collapse seen at the height of the pandemic during the second quarter, but that growth could be further hit by a combination of rising joblessness (as a consequence of the need for ongoing social distancing) and increased containment measures as virus numbers rise again, in turn linked to more sectors opening up at a time when many countries are moving into winter months.

Note that global sentiment about prospects for the year ahead dipped in August, having climbed in the prior three months, in part reflecting growing caution about the outlook. 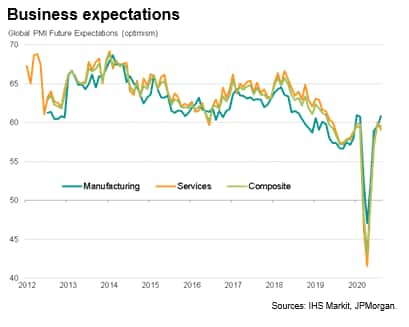 UK leads the August upturn, but US shows signs of greatest longer-term strength

Of the largest economies, the UK reported the strongest expansion of output in August, followed by Russia, China and the US. However, the US was notable in reporting by far the largest gains in both backlogs of work and employment during the month.

Both India and Japan remained firmly in decline but, perhaps most worryingly, Italy and Spain both fell back into contraction, linked to rising infection numbers. 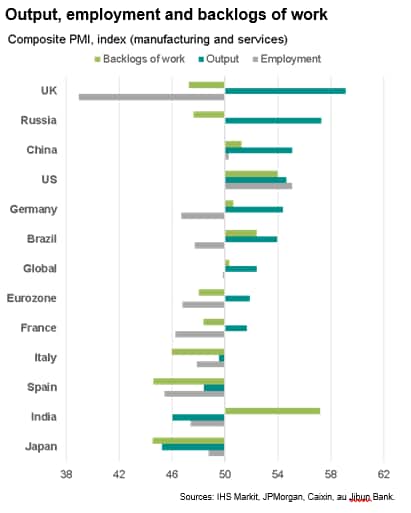