The UK manufacturing downturn intensified in August, as producers reported the steepest drop in new business for over seven years.

The headline IHS Markit/CIPS UK Manufacturing PMI® dropped to 47.4 from 48.0 in the prior two months, its lowest since July 2012 and indicating the fourth successive monthly deterioration of business conditions. Only on three occasions since the global financial crisis ten years ago has the goods-producing sector reported a steeper rate of contraction.

Although the survey sub-indices showed the rate of contraction of output easing slightly in August, the pace of decline remained among the steepest seen over the past decade, commensurate with production falling at an annual rate of over 3%. Moreover, the easing in the rate of output decline primarily reflected stock building ahead of a possible disruptive no-deal Brexit at the end of October. Worryingly, while stocks of finished goods rose, inflows of new orders slumped to the greatest extent since July 2012. 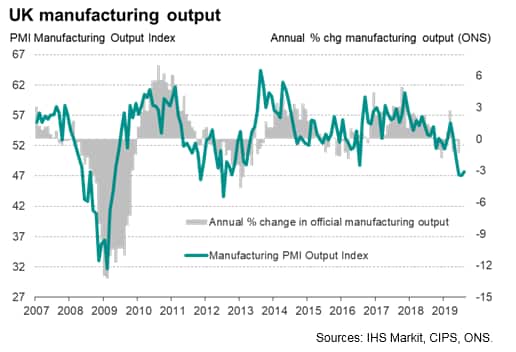 The combination of rising inventories and a steeper rate of loss of new orders sends an increasingly negative signal for future production. The forward-looking orders-to-inventory ratio fell to its lowest since 2009. 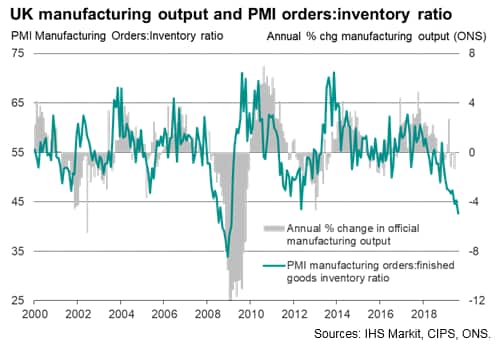 While we may continue to see some further stockpiling in coming months as the October 31st Brexit deadline nears, the production trend further ahead looks set to deteriorate markedly from already worrying levels in the absence of a revival in demand. 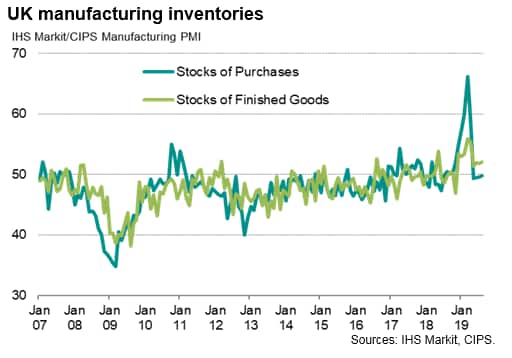 Exports fall at second-steepest rate since 2009

Digging deeper into the new orders data, a key area of weakness was exports, where the latest decline in new orders has been exceeded only once (in 2012) since the height of the global financial crisis. Exports have now fallen in nine of the past 13 months, with the rate of decline gathering substantial momentum in August. 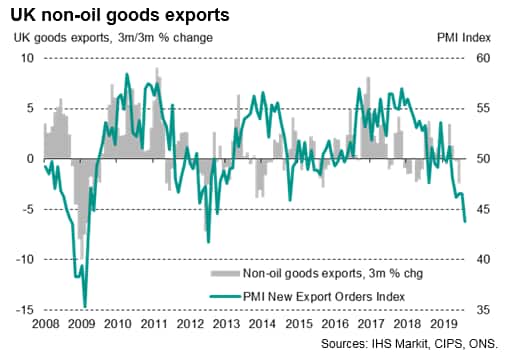 The worsening export trend has coincided with a weakening of global demand since early 2018, but many companies also report that the drop in demand has been exacerbated by uncertainty relating to Brexit. In particular, producers of intermediate goods (inputs supplied to other companies) have reported an especially marked downturn in foreign demand over the past year and into August, in part due to customers reportedly shifting to EU-based suppliers. 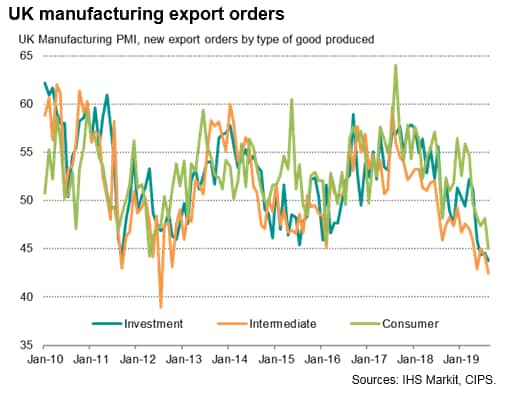 The trimming of headcounts also reflected deepening concerns about the outlook. Firms' expectations of future output deteriorated markedly in August to the lowest since data on future expectations were first collected in 2012. Anecdotal survey replies regarding the outlook were increasingly dominated by worries over the disruptive impact of Brexit as well as concerns over a broader slowing of economic growth at home and abroad. 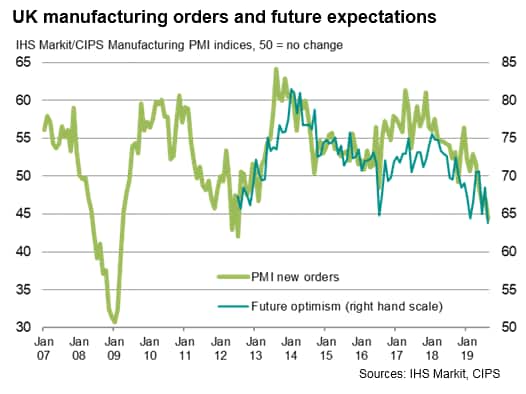 Both input prices and selling prices continued to rise, in many cases reflecting higher import costs arising from the depreciation of the pound. However, lower global commodity prices, linked in turn to the cooling of global demand, meant the overall rates of inflation remained among the lowest seen since 2016.