UK manufacturers reported the largest monthly fall in production for seven years in July, with recent order book weakness also leading to one of the largest culls in factory employment for over six years. Price pressures meanwhile eased, despite the weakened exchange rate, as more suppliers offered discounts in the face of disappointing sales levels.

At 48.0 in July (unchanged on June) the IHS Markit/CIPS UK Manufacturing PMI® indicated a third successive monthly deterioration of business conditions, with the rate of decline continuing to run at the steepest since February 2013.

Output fell in July to an extent not seen since July 2012, and a rate exceeded only twice1 since the height of the global financial crisis in early-2009. At its current level, the output index is consistent with the official measure of manufacturing production falling at a quarterly rate of 1%, or 4% annually. 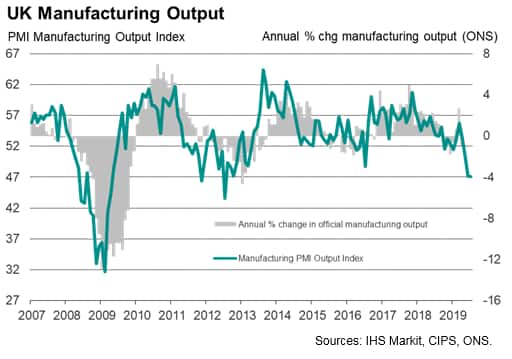 New orders also fell sharply, the rate of decline easing slightly compared with June but remaining one of the steepest seen over the past decade, fuelled in part by a further severe drop in export orders. The past three months has been the worst spell for exports for seven years.

Notably, the trend in new orders remained weaker than production for a sixth successive month in July, backlogs of work fell sharply again, and the number of companies reporting an unplanned increased in inventories due to weak sales rose, all of which suggests that production cuts could intensify in coming months unless new work inflows pick up.

The order book weakness also meant that companies increasingly took to cutting workforce numbers. With the exception of February, the July survey recorded the sharpest drop in factory employment since early-2013. 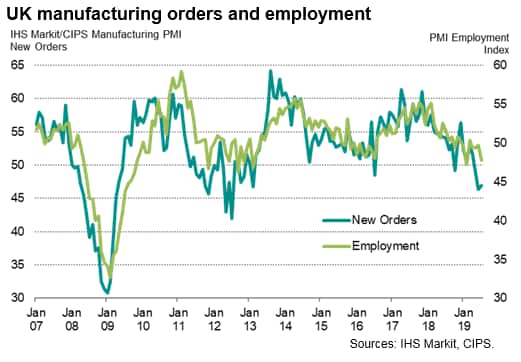 The trimming of headcounts also reflected ongoing concerns about the outlook. Firms' expectations of future output improved in July but only from a low base in June, meaning the overall level of sentiment remained among the gloomiest since 2012. Anecdotal survey replies regarding the outlook were dominated by worries over the disruptive impact of Brexit and waning economic growth, both at home and abroad.

Alongside the cooling pace of manufacturing growth and order book decline, the survey recorded a further easing of prices pressures. The PMI's gauge of input costs fell to the lowest since April 2016, while the index of average selling prices slipped to the lowest since June 2016.

Although the survey often found import prices to have been pushed higher by the fall in the value of the pound, which traded more than 1½% lower against the US dollar than in June over the latest survey period, manufacturers and their suppliers were increasingly reported to have competed on price. 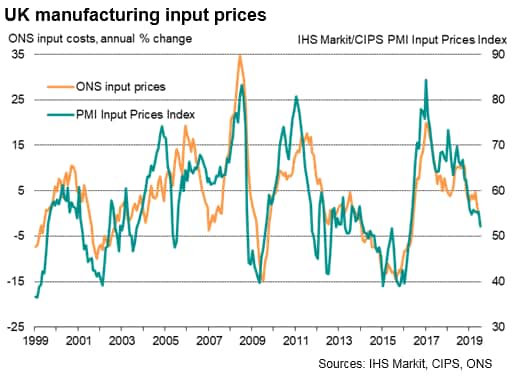 Surveyed companies' reasons for lower selling prices included "competition is increasing, causing us to cut margins to maintain market share", "competition pushing down prices", "lower worldwide demand, aggressive pricing from competitors", and "[we are] trying to be more competitive". Similarly, reasons provided for lower costs during the month often included signs of a shift to a buyers' market, such as "suppliers offering discounts", "excess stock in suppliers' warehouses" and "we are seeing prices reduce as European demand has slowed after Brexit stocking-up".

While Brexit-related uncertainty was commonly cited by PMI contributing companies as a factor behind the UK's manufacturing downturn, the international environment has also clearly become more challenging, and helps explain some of the export loss despite the more competitive currency following the slide in the value of the pound. July PMI survey data showed the US 'flash' manufacturing PMI dropping to the lowest since 2009, and similar weak readings were seen in both China and Japan, as trade war worries continued to be cited as having dampened trade flows. However, only the eurozone saw a steeper rate of manufacturing decline than the UK in July, largely reflecting a sharper rate of deterioration in Germany, where slumping global demand for autos and business equipment appear to have hit exports especially hard.

A boost to growth could again be seen in the lead up to the scheduled Brexit date on 31st October, as companies (and households) build safety stocks of items ahead of potential supply disruptions, as was seen in the first quarter of 2019. However, the deteriorating international environment suggests that any such boost will prove short-lived. Even in the event of a 'smooth' non-disruptive Brexit, UK manufacturers could struggle in the months ahead and continue to act as a drag on the economy unless global trade picks up. 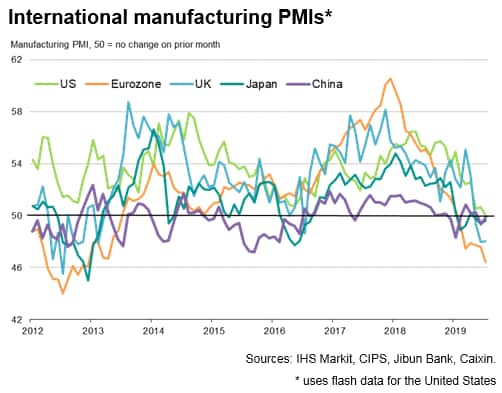 The output index is based on companies reporting whether their production has risen, fallen or stayed the same at mid-month compared to the prior month. Being based of objective metrics rather than sentiment, the PMI indicators of output, orders and employment provide an accurate guide to official manufacturing data. The PMI also typically outperforms other surveys which are based on subjective measures such as whether production is above or below 'normal', or whether order books are 'satisfactory', not least because the definition of such subjective measures can change over time (read more in our special paper).

1Steeper monthly declines were recorded in July 2012 and November 2011.