The IHS Markit Composite PMI for the euro area strengthened to a three-month high of 51.9, up from 51.0 in January. Although rising, at these levels, the PMI shows the quarterly rate of GDP growth merely picking up to 0.2% in February from 0.1% in January. The first quarter could consequently see the economy struggle to beat the 0.2% expansion recorded in the fourth quarter of last year. 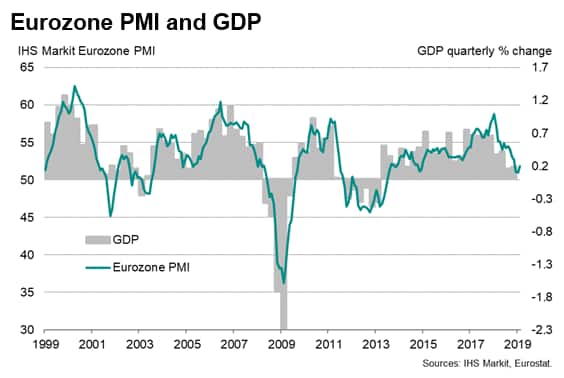 The improved performance in part reflected the easing of one-off dampening factors such as the 'yellow vest' protests in France and new auto sector emissions rules. However, other headwinds continued to constrain business activity, according to the anecdotal evidence from the survey. These included slowing global economic growth, rising geopolitical concerns, trade wars, Brexit and tightening financial conditions.

Manufacturing remained especially fragile, with an increased rate of decline of new orders and signs of excess capacity relative to sales boding ill for future production. Alongside disappointing official data, the survey suggests the factory sector is in a deepening downturn.

To underscore the plight of Eurozone producers, Germany reported the steepest decline in export orders of all 29 countries for which PMI data are available. Spain and France also saw falling exports.

While the service sector is showing greater resilience, with output growing at the fastest rate for three months in February, inflows of new business remained worryingly weak, providing little hope for any significant improvement in the overall performance of service sector firms in coming months.

Price pressures at lowest for 1½ years

The survey also indicated that price pressures have meanwhile cooled to the lowest for a year-and-a-half. Reduced inflationary pressure in part reflected the feed-through of lower oil prices but was also attributable to supplier pricing power being inhibited amid the stagnation of demand recorded by the survey in February, notably in the goods-producing sector.

When looking at the implications for ECB policy, it is equally important to consider the PMI price indices as well as the output indicators. While the output indicators generally give a very good signal as to whether the central bank is likely to adopt a generally hawkish or dovish bias, there have been times when the ECB has altered policy purely in response to changing price signals, notably in July 2008. 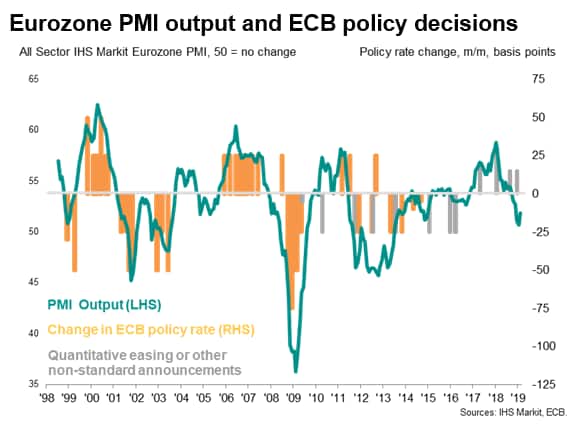 In terms of price pressures, we use a blended gauge of manufacturing input costs and suppliers' delivery times (the latter inverted to signal the degree of capacity constraints) as our preferred guide to how changing price conditions are influencing ECB policy. In the past, readings above 62 have indicated scope for policy tightening, while a drop below 50 is conducive to looser policy. A reading of 56 is approximately the neutral level. In February, this index fell to 52.2, which is therefore well into dovish bias territory. 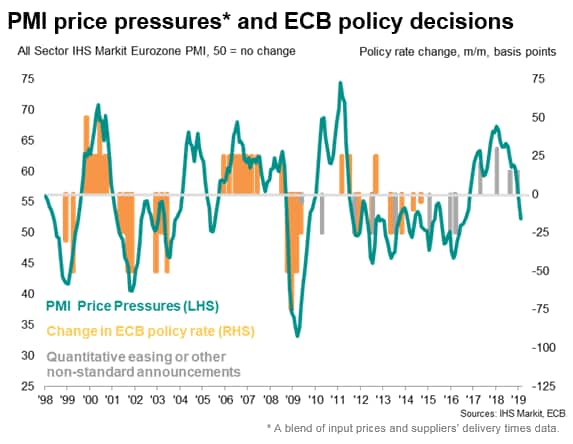 Both output and price gauges therefore add to the suggestion that policymaking will turn increasingly dovish when the ECB Governing Council next meets. Policymakers will need to tread a fine balance, however. On the one hand, the ECB will not want to be seen to be completely reversing its policy stance too quickly after recently announcing a halt to its asset purchase programme. On the other hand, policymakers will want to avoid being accused of not reacting quickly enough in the face of surprisingly soft data, thereby sounding too complacent.

At the March meeting, no policy action is therefore likely, but the increased downside risks to the outlook are expected to be brought more to the fore in the discussions. As such, the ECB is consequently likely to outline the options it has available in terms of policy tools to deploy in the event of further weak data in coming months.