Hong Kong SAR's private sector remained mired in one of its worst downturns for the past two decades during October, according to the latest IHS Markit PMI data. The survey also brought signs of a deepening economic malaise, as the impact of the ongoing political unrest and a worsening global trade environment continued to dampen business activity and hurt investment.

With PMI data signalling accurately (and well in advance) the steep GDP decline in the third quarter as indicated by official data, October PMI results suggest the economy is heading towards a deeper recession in the final quarter of the year. 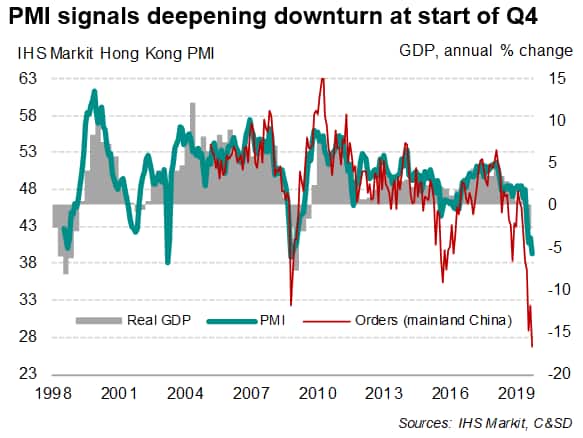 The IHS Markit Hong Kong PMI™ fell from 41.5 in September to 39.3 in October, indicating the worst deterioration in the health of the private sector economy since November 2008. The latest reading is consistent with GDP contracting at a year-on-year rate of close to 5% at the start of the fourth quarter.

The latest decline means business activity shrank for a nineteenth straight month, marking one of the deepest and longest downturns for the past 20 years.

The PMI is a composite index based on five key survey variables, some of which showed even steeper declines. Most notably, output fell to the greatest extent since the survey began in July 1998, often attributed to demand being hit by protest-related disruptions and increasing trade protectionism. New business intakes showed the steepest decline since the start of 2009.

Driving the reduction in demand was a record drop in orders from mainland China, as well as another sharp fall in overseas sales. 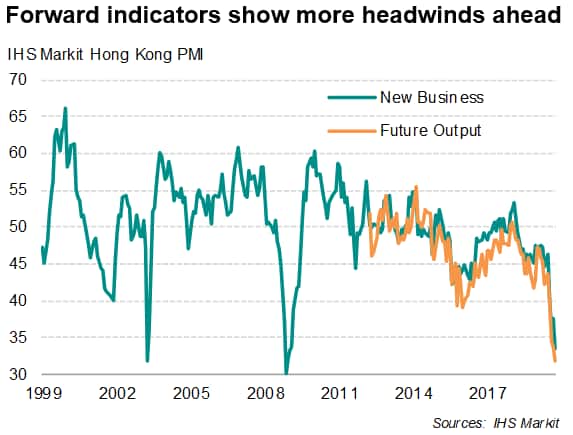 As overall demand conditions continued to worsen, private sector firms became increasingly pessimistic about the outlook. Business expectations about output in the year ahead fell to the lowest since data on this indicator were first available just over seven-and-a-half years ago. Companies were especially concerned about the impact of protests and a deterioration in the global trade environment on economic activity. 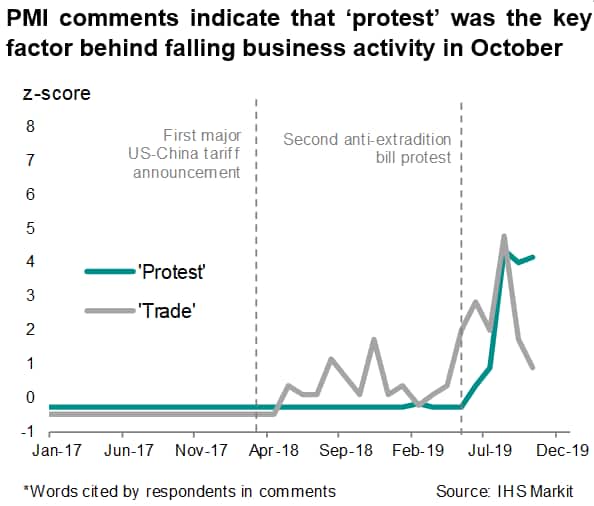 Adding to the economic woes were rising input costs. Following three months of decline, overall input prices rose in October, driven by a combination of higher prices for purchases and increased wages. Firms not only had to absorb the rise in costs amid the economic downturn but also provided price discounts to boost sales, thereby compressing margins. Prices charged for goods and services fell for a fourth month running, though the rate of decrease moderated from September.

With headwinds from China-US trade conflicts and political crisis showing no signs of letting up in coming months, the worst for the Hong Kong SAR's economy may still not be over yet. Should the city-wide unrest extend over to next year with a further escalation in protest violence, we expect a 0.2% decline in real GDP for 2019, followed by only a marginal 0.1% rise in 2020.

In the meantime, strong volatility in the local stock market is expected, with the PMI pointing to greater downward pressure on equity prices.