South Africa's private sector stumbled at the close of 2019, with output contracting amid a heightened round of "load shedding" that caused significant power cuts at businesses. Amid numerous setbacks during the year, the country is expected to record weak annual GDP growth of just 0.2%. Challenges also remain for 2020, including Eskom restructuring, drought, strikes and property law changes, signalling that the ruling ANC party has a fraught period ahead to balance long-term policy decisions with efforts to restore economic performance.

The South Africa PMI, compiled by IHS Markit, ended 2019 on a sour note, posting 47.6 in December to indicate a marked deterioration in private sector business conditions. The reading was the lowest for 14 months and among the weakest seen for over five years. The poor end to the year represents a worsening of the trend of decline that has been observed for most of the period since the middle of 2018.

In the latest survey, struggling firms drew attention to widespread power cuts, as the country's electricity supplier, Eskom, engaged in a further round of "load shedding". This removed as much as 6,000 megawatts from the grid on 9th December, the largest cut seen throughout the past year, which impacted production at several surveyed businesses including mining and manufacturing firms. Power disruption was also reported to have hit demand, with new orders falling at the fastest pace in 14 months.

While the latest setback for the South African economy was the sharpest seen in 2019, according to PMI data, it was illustrative of a year fraught with economic and social fragilities that undermined business activity. Power cuts, drought, civil unrest and a weakening trade climate have all limited the economy. This is apparent in the PMI which displayed its worst annual performance (49.2) so far in 2019 (the series began in 2011). As such, fourth quarter GDP results are expected to show subdued growth overall for the year. Based on historical relationships, the PMI on its own suggests that 2019 annual economic growth will be around 0.7%. IHS Markit's current prediction is for an increase in GDP of 0.2%, which would be the weakest since the financial crisis.

Amid slow economic performance, businesses are unsurprisingly lacking in confidence about the prospects for 2020. The PMI Future Output Index - which measures the business outlook for activity in the coming 12 months - continued to run at a relatively weak level by historical standards in December, although was the strongest seen in the second half of the year.

Infrastructure problems are a key feature of comments from surveyed businesses, with water and electricity the notable areas of concern. Drought conditions have debilitated agriculture and business in parts of the country. Firms are also generally expectant of further power cuts this year as Eskom undergoes a restructuring process. Indeed, the country has already suffered some load shedding in January. Plans are underway to unbundle the utility into three divisions that will oversee generation, transmission and distribution separately, with transmission to be completed by March. While this process occurs, there is the risk of further disruption to economic activity.

Another notable concern among investors is uncertainty over future property rights. The ruling ANC party are looking to rework property law to allow land expropriation without compensation. While the short-term risk to business is low, hesitation around the final agreed policy is appearing to stall spending decisions and fixed investment from overseas.

With that said, the outlook is not all negative. Exports have weakened since the start of the US/China trade war, so news of a "phase one" deal will be welcomed by South African businesses as a potential driver of global trade growth in 2020. The deal only pulls back on some tariffs but could lead to further climb-downs that re-stimulate the export economy, with mining and manufacturing sectors standing to benefit the most. Local issues could nevertheless still limit firms' competitiveness in the global market. 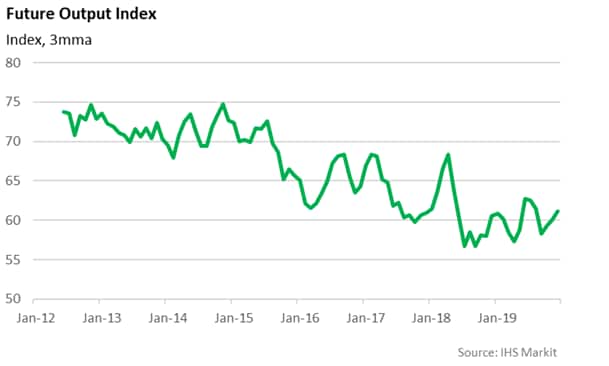 Assuming no major disruptions, IHS Markit expects GDP growth to rebound to 1% in 2020, but the prospects of South African businesses this year depend on a number of factors, not least of all how the government responds to ongoing structural deficits and social issues. As such, it could be another turbulent year for the country. January PMI will be released on February 5th and give the first indication as to how the economy is faring in the new year.