Rising interest rates in the US are putting pressure on currencies in emerging markets, leading to greater inflationary pressures and challenging economic conditions. The aim of this note (the first in a series of commentary pieces surrounding PMI data across emerging economies) is to assess the current macroeconomic conditions across some of the more "vulnerable" economies, namely Brazil, India, Indonesia, South Africa and Turkey (which were previously dubbed the 'fragile five'). At present, Turkey seems to be facing the greatest challenges.

As part of the US Federal Reserve's policy 'normalisation', interest rates have been increased three times this year. Expectations are firmly set on a fourth before the end of 2018, while the median Federal Reserve Open Market Committee (FOMC) member expects a further three across 2019. As interest rate differentials between the US and emerging market (EM) countries tighten, this has put EM assets under pressure, with EM equities and foreign exchange seeing marked declines in the year-to-date. EM countries that have been particularly susceptible to capital flight are those with heavy reliance on external funding.

A combination of US economic strength, rising US interest rates and various risks in certain emerging markets has resulted in the underperformance of EM FX markets during 2018 so far. While Turkey and Argentina are two stand-out examples of such currency stress, there has been a contagion effect which has resonated through the developing world.

Broadly speaking, EM manufacturing sector growth has deteriorated markedly since a five-year peak seen at the end of 2017. September PMI data signalled a pace of expansion that was only marginal and the slowest in just over two years. Charting the EM Manufacturing PMI against currency changes suggests that the PMI has moved in line with markets. 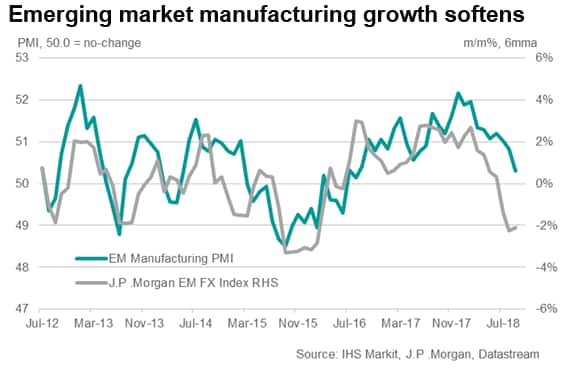 Growth trends across the 'fragile five' vary, and policy responses have also differed quite vastly. PMI data over the past two quarters signalled that South Africa's private economy remained firmly in contraction, while Turkey's manufacturing sector business conditions deteriorated at the sharpest rate since March 2009 in September. The South Africa Reserve Bank has loosened monetary policy to support the economy, but monetary policymakers in Turkey have been forced raise interest rates to support the lira. 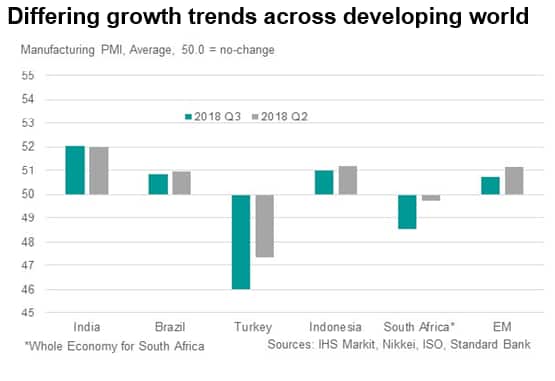 Interest rates in Brazil have meanwhile fallen from as high as 14.25% in 2016 to 6.5% as part of efforts to lift the sluggish economy. Meanwhile, central banks in India and Indonesia have been able to lift rates and alleviate currency pressure due to comparatively stronger economic conditions. However, manufacturing growth was only modest in both countries in the third quarter, corroborating the broader trend across the EM world. 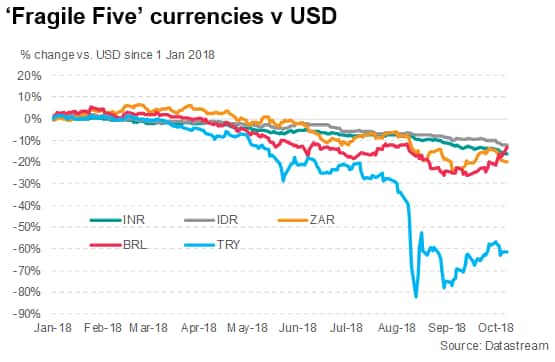 Across the 'fragile five', currency weakness has been mentioned by companies responding to IHS Markit's PMI surveys as a key factor driving costs higher. In fact, input price inflation hit survey highs in both Brazil and Turkey during September and was markedly higher than rates of inflation seen across 2013 and 2014 during the height of the 'taper tantrum', when the US Fed began to pare back its asset purchases.

On the other hand, cost pressures, albeit still elevated, are somewhat weaker in India, Indonesia and South Africa. Nonetheless, inflationary pressures are likely to build in all cases as the combined effect of rising commodity prices (which are generally priced in US dollars) and weak domestic currencies increases the cost of imported goods and materials. 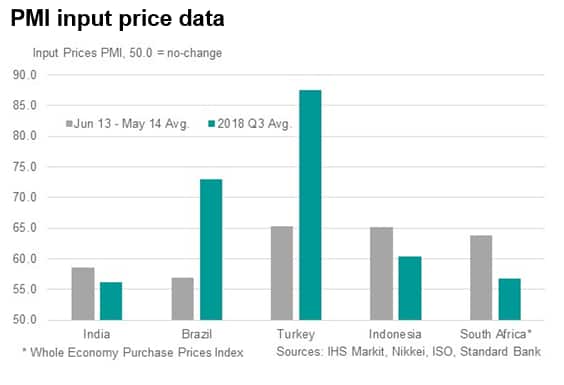 A similar picture was evident for output prices. Turkey and Brazil saw substantial increases in selling prices in September, while rates of inflation were generally less marked elsewhere. 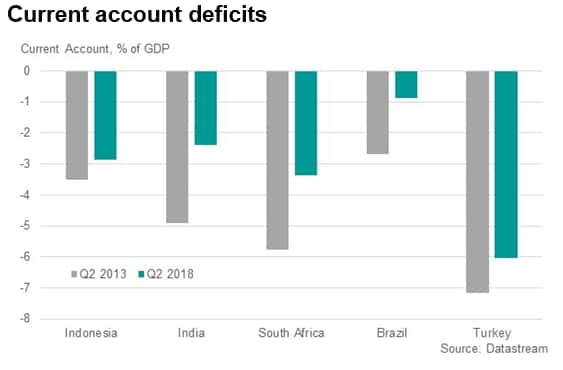 The ability to finance short-term debt owed to foreign creditors has also improved in some cases, but remains a problem for Turkey, who, according to data from the IMF, would have insufficient foreign exchange reserves to relieve any immediate obligations. 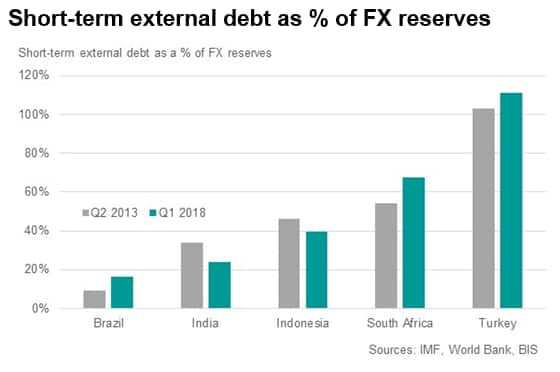 Despite weaker currencies and improved international competitiveness, PMI data have signalled a distinct drop in exports across all 'fragile five' economies except India, in line with the wider trend of deteriorating export performance seen across all EMs. All else being equal, a combination of currency depreciation and declining exports will contribute to a further worsening of current account deficits, potentially leaving these countries more susceptible to further capital flight. 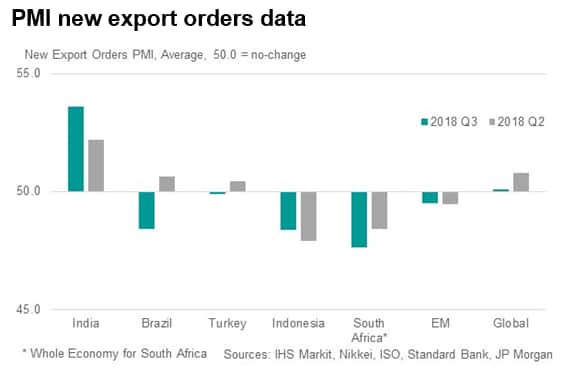 The slowing of the global trade cycle in recent months, as seen in the PMI data, is a worrying trend for exporters. Indeed, if rising input prices are passed on to clients, domestic demand could also be impacted by eroding purchasing power.

Of the original 'fragile five', Turkey appears to be suffering most under the pressure of the Federal Reserve's rate rising cycle, with Brazil and South Africa also showing vulnerabilities. This has been borne out by PMI data, which will provide further updates on the economic situation in these economies on a monthly basis.